I was about to copy out my notes about the structural development of the Doctrine and Covenants from a lecture given by Bruce Woolley at BYU Education Week, when I discovered that Duane Crowther has put the same information online.  That saves me a lot of work!  Thanks, Brother Crowther!

Here is the link:  Structural Development of the Doctrine and Covenants

In addition, please also see Robert J. Woodford, "How the Revelations in the Doctrine and Covenants Were Compiled", Ensign, Jan. 1985.


THE IMPORTANCE OF THE DOCTRINE AND COVENANTS

THE HISTORY OF THE DOCTRINE AND COVENANTS

Okay, never mind; I can't resist printing up my notes from Bruce Woolley's lecture after all.  Everything following comes from his lecture at BYU Education Week, given August 18, 2005.

Sections 20 and 22 of the D & C were called "Articles and Covenants" and were sustained as scripture at the first general conference of the Church, June 9, 1830.  They were read at the start of every general conference through Joseph Smith's and Brigham Young's tenures as presidents.  In July of 1830, Joseph Smith wrote down previously received revelations

Brother Woolley says there are two characteristics of Latter-day Saints:  1) We're packrats (think food storage), and 2) we all have to have our own copy of everything. The faithful early saints wanted their own copies of the revelations.  Oliver Cowdery handcopied them for himself.  Then David Whitmer did as well.  Others followed.  They called this the Kirtland Revelation Book.

Finally a special conference was held in which to decide whether the revelations should be printed and published at Hiram, Ohio, November 1, 1831.  There were 12 members in attendance, the most well-educated church members (excepting Joseph Smith who was uneducated).  There were four more revelations received during those three days.  The consensus of the conference was that the revelations should not be published as making them too freely available would be "casting pearls before swine."  But Joseph Smith was for publication, and his opinion was ratified by a revelation which is one of seventy revelations published in the History of the Church and not in the Doctrine and Covenants.

The decision was made to publish 10,000 copies initially.  (5,000 copies were printed of the first edition of the Book of Mormon.)  Olivery Cowderey, Sidney Rigdon, and William E. McLellin were assigned to write a preface for the revelations during a recess in the conference.  They were stymied and finally asked Joseph Smith to pray for help.  The preface was then revealed to Joseph Smith, the first revelation to be dictated as it was received, and thus we have the only book in the history of the world whose preface was written by God Himself, now Section 1 of the Doctrine and Covenants.

Section 67 (the third revelation received at this conference) was given after the brethren were still balking at publishing the revelations because they thought the wording of them simplistic and unsophisticated.  It was then that Joseph Smith issued the challenge to the most educated, William McLellin, to write a prophecy which 1) came from the Lord, and 2) was new doctrine never before received on the earth.  Of course, we know the story:  Brother McLellin could not come up with a thing, and acknowledged that revelations received through the prophet were best as they were.

The fourth revelation received at this conference was called "Appendix to the Revelations," regards what will happen at the Second Coming, and is now Section 133.

While they were preparing the book for publication, William W. Phelps, the printer, published parts of it in the periodical, The Evening and Morning Star, using his personal copy of the Kirtland Revelation Book, and therefore is not a perfect match with the Book of Commandments.  (Sections 65, 68, 72, 76, 83, and part of 80)

While living with her uncle A. Sidney Gilbert, 15-year-old Mary Elizabeth Rollins gained a great love and esteem for the revelations that were to be printed.  In her own words, "One evening the brethren came to Uncle's house to converse upon the revelations that had not been printed as yet, but few had looked upon them, for they were in large sheets, not folded. They spoke of them with such reverence, as coming from the Lord; they felt to rejoice that they were counted worthy to be the means of publishing them for the benefit of the whole world." (Mary Elizabeth Rollin Lightner Autobiography, published by Robert Barrett on FindaGrave.com)

When the typesetting of the Book of Commandments was done and the copies of five large sheets containing 32 uncut pages each (160 pages total) had been printed, the press was destroyed by enemies of the Church.  The pages were thrown out into the street, but were heroically rescued by Mary and her 13-year-old sister Caroline.  (See James E. Faust, "Courage in the Cornfield", Friend, July 2007)

"The mob renewed their efforts again by tearing down the printing office, a two story building, and driving Brother Phelps' family out of the lower part of the house and putting their things in the street. They brought out some large sheets of paper, and said, 'Here are the Mormon Commandments.' My sister Caroline and myself were in a corner of a fence watching them; when they spoke of the commandments I was determined to have some of them. Sister said if I went to get any of them she would go too, but said 'They will kill us.' While their backs were turned, prying out the gable end of the house, we went, and got our arms full, and were turning away, when some of the mob saw us and called on us to stop, but we ran as fast as we could. Two of them started after us. Seeing a gap in a fence, we entered into a large cornfield, laid the papers on the ground, and hid them with our persons." 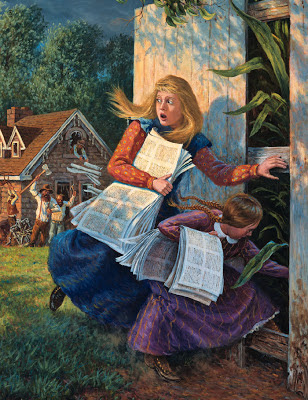 "The corn was from five to six feet high, and very thick; they hunted around considerable, and came very near us but did not find us. After we satisfied ourselves that they had given up the search for us, we tried to find our way out of the field, the corn was so high we could not see where to go, looking up I saw trees that had been girdled to kill them. Soon we came to an old log stable which looked as though it had not been used for years. Sister Phelps and children were carrying in brush and piling it up at one side of the barn to lay her beds on. She asked me what I had. I told her. She then took them from us, which made us feel very bad. They got them bound in small books and sent me one, which I prized very highly."

As well she should!  Besides being of great spiritual value, they are the most expensive antique books relating to Church history today.  Only twenty are known to exist.


Those pages which were hand-cut, hand-assembled, and sewn together were printed up as the Book of Commandments. The Community of Christ (formerly the Reorganized Church of Jesus Christ of Latter-day Saints) has published replicas through their Herald House printing company. 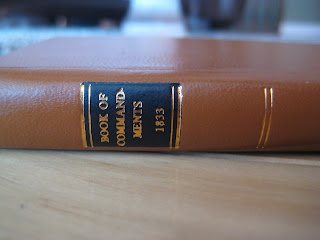 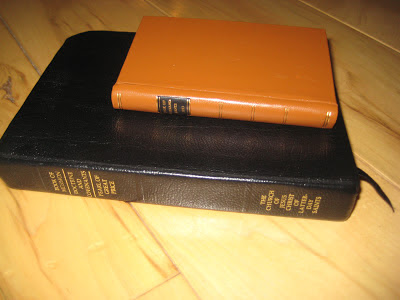 My replica of the Book of Commandments--
much smaller than the present day triple combination. 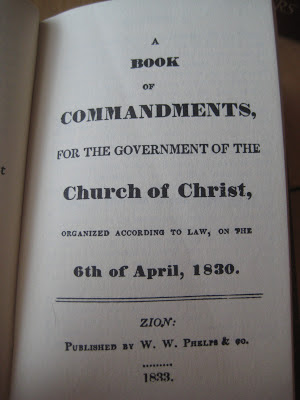 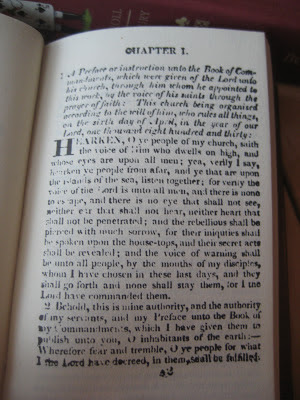 First page of the revelations

Because only the first 160 pages had been printed before the mob destroyed the press, this book ends abruptly at Section 64, verse 47 in the middle of a sentence. 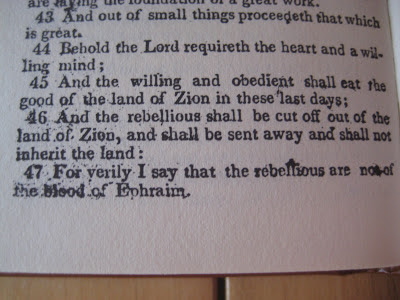 You can see that in the original handwritten manuscript which W.W. Phelps was using, that final word "Ephraim" had been circled--the point at which he had stopped for the day.  (Herald House includes a facsimile of this page in their replica book.) 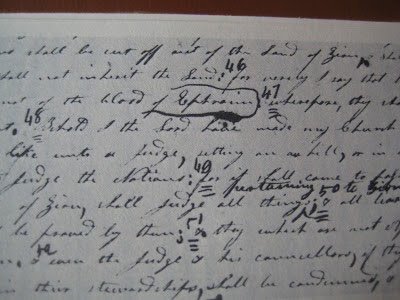 (If you want your own copy of this replica book--and let's face it: why wouldn't you?--buy it from Herald House and skip Amazon where it's 2 to 10 times the price.)

A second special conference was held August 17, 1835 in Kirtland to discuss republishing the revelations in a new book.  Each revelation was read and ratified by the First Presidency, then the Quorum of Twelve Apostles, then the Seventy, and on down through the whole membership of the church.  They stood and voted in turn to sustain the book as scripture.  There is no evidence that there was a single negative vote.

The first edition of this book called Doctrine and Covenants was printed that summer.  It contained two sections: Joseph Smith's Lectures on Faith, and 102 revelations, divided into "chapters" rather than "sections".  Frederick G. Williams was the printer. 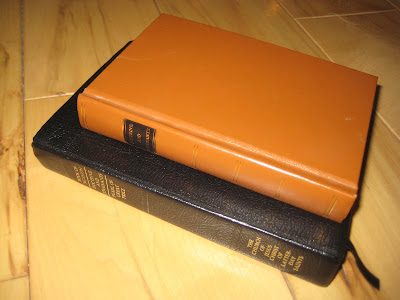 This replica is also published by Herald House printing.
(They also publish the original hymnal Emma Smith compiled,
which is teeny-tiny.)

In 1844 the second edition of this book was published in Nauvoo, the last one that was proofread by Joseph Smith.  The wording has never been changed.  Two more editions were published from these same plates in 1845 and 1846.

In 1921 the printing was put into double columns and the book included 136 sections and the Manifesto.  Lectures on Faith were now left out.  James E. Talmadge was the editor.

In 1930 a different edition was published called Latter-day Revelation.  It omitted the personal revelations.  It was never sustained as scripture, however, and did not last.

Our current Doctrine and Covenants was published in 1981.

I really enjoyed your overview of the first Doctrine and Covenants lesson. The articles you link to are great also.
Thanks for taking the time to post.

What a great first D&C lesson. I'm well prepared for tomorrow. I want to start preparing lesson 2 as I have a very busy week. I always to to your blog site first before I begin, so I am axiously, and joyfully waiting for your next post. Thanks for all you do. I can't tell you how much I appreciate it.