Doctrine and Covenants Lesson #10 "This is My Voice Unto All"

Today we are studying D&C 25, the personal revelation given to Emma Smith, the wife of the prophet, since verse 16 of it states that this revelation is for everyone.  Three topics from this revelation have been chosen for this lesson: 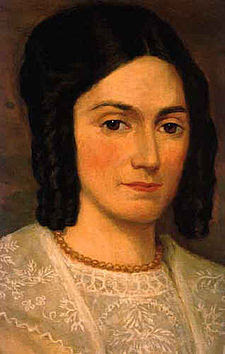 Whether we are married while on the earth or not, we are all going to be married one day in the Celestial Kingdom.  This life is the time to prepare.  Those who are married are practicing for Celestial marriage in this life; those who are not must prepare for it.

"And the office of thy calling shall be for a comfort unto my servant, Joseph Smith, Jr., thy husband, in his afflictions, with consoling words, in the spirit of meekness."  (D&C 25:5)

Joseph wrote in his journal, regarding a time in 1842 when he was in hiding and Emma had come to visit him, "With what unspeakable delight, and what transports of joy swelled my bosom, when I took by the hand, on that night, my beloved Emma--she that was my wife, even the wife of my youth, and the choice of my heart...Oh what a co-mingling of thought filled my mind for the moment, again she is here, even in the seventh trouble, undaunted, firm, and unwavering--unchangeable, affectionate Emma!" (History of the Church 5:107)

And Joseph kept this counsel as well, and was a comfort to his wife.  In her portrait she is wearing the string of gold beads that were a gift from Joseph.  After his death, she carried a lock of his hair in a locket she wore the rest of her life.  She lived to the age of 74 and exited this life with her arm extended, calling out, "Joseph!  Yes, yes, I'm coming."  (Susan Easton Black, Who's Who in the Doctrine and Covenants, p. 275)

The second commandment we will discuss is found in verse 14:

"Continue in the spirit of meekness, and beware of pride.  Let thy soul delight in thy husband, and the glory which shall come upon him."

Emma was 5 foot 9 inches, with dark hair and brown eyes.  She is always described as having been very beautiful.  (Who's Who, p. 273)  She had a quick wit, as well.  She could manage a canoe (!) and was a skilled horseback rider.  She sang in her church choir as a girl.  She was exceptionally bright and studied for one year at a girls' school.  (Arnold K. Garr, et. al., Encyclopedia of Latter-day Saint History, p. 1111)  Emma was outstandingly beautiful, she was refined, she was educated, and she came from a comfortable home.

Joseph was 6 feet tall, weighed 180 lbs, and is always described as having a commanding presence about him, and being well-built and muscular, but seldom or never is he described as having been exceptionally handsome.  His family's financial status was generally along the poverty level.  His education was extremely limited.  Peter Burnett, who was an attorney for Joseph Smith, described him as follows:

His appearance was not prepossessing and his conversational powers were but ordinary.  You could tell at a glance that his education was very limited.  He was an awkward but vehement speaker.  In conversation, he was slow and used to many words to express his ideas and would not generally go directly to a point."  (Peter H. Burnett, Recollections and Opinions of an Old Pioneer, p. 66-67, quoted in Latter-day History, p. 220)

Mr. Burnett wrote that despite all these drawbacks, "he was much more than an ordinary man," and described the power of his personality, his ideas, his kindness and his influence, but it is possible to see from his words that Emma might well have considered herself Joseph's superior.  Many other of the educated early saints did.  Some begged to see the plates as proof of Joseph's word, but although Emma had them right in her house, right under her bed, right in her wagon, right on her kitchen table, she said, "I never felt at liberty to look at them."  (Who's Who, p. 273)  How many of us could have the controversial golden plates sitting right in front of us with nothing but a cloth covering them, and not sneak a peak?  Emma could be trusted.

My brother, Gary J. Wyatt, gave a talk in his ward in Kansas several years ago on pride.  He prepared a little quiz to check on our state of pride:

"To paraphrase C.S. Lewis: The person who is looking down on others is one who cannot look up to God.  Our goal should be cooperation, not competition."

The third commandment to Emma that we must study today is one of the most difficult to obey.

We don't have much control over what happens to us, so how can we be expected to be joyful?  Yet rejoicing is a commandment.  By this we can know that it is a choice over which we have control, and that is exciting news!

"Wherefore, be of good cheer and do not fear," the Lord said to the suffering early saints, "for I the Lord am with you."

While Joseph was imprisoned in the Liberty Jail, Emma had to flee with her children and the other saints 200 miles to Illinois, much of that on foot.  The whole way, she carried his manuscripts, including the translation of the Bible, tied under her skirts to keep them safe.  She later wrote to Joseph, "No one but God knows the reflections of my mind and the feelings of my heart when I left our house and home, and almost all of everything that we possessed excepting our little children, and took my journey out of the State of Missouri, leaving you shut up in that lonesome prison."  (Who's Who, p. 275)

Of her eleven children, nine of which she bore and two which she adopted, only five grew to adulthood.  She lost six children in infancy and childhood!  In addition to caring for the five living children, she continually cared for many ill.  She was homeless much of her early married life and had to rely upon the hospitality of others.  When she did get her own home, she returned that hospitality to many homeless Saints.  In fact, in Nauvoo, many sick Saints set up tents as a hospital ward in her front yard, with her as the nurse.

When Christ hung on the cross, he asked his disciple John to care for his mother after his death.  Joseph didn't have the opportunity to arrange for the care of his widowed mother before he died, but he didn't need to; Emma naturally took care of that.  She also cared for many of her relatives, and many of her second husband's relatives, including his mistress and illegitimate 4-year-old son when they became known and were destitute.  (She cared for the boy until her death 11 years later.)  ("Was Emma Smith an Elect Lady?" Deseret News, Nov. 7, 2008)

Emma saw trials of homelessness, multiple moves, mob action resulting in the death of one of her babies, the deaths of other children, the trials of polygamy, the murder of her beloved husband, poverty, criticism, exile, loss of almost all her earthly possessions, single parenthood (including giving birth after the death of her husband), a second marriage to a nonbeliever, infidelity on the part of her second husband, humiliation, mental illness in her family (the youngest child, David), abandonment after she and the church leadership had a falling out and she remained in Illinois with her mother-in-law, and extreme caregiver responsibilities (including hand feeding Lucy Mack Smith for the last year of her life).

Yet, her mother-in-law wrote of her, "Although her strength was exhausted, still her spirits were the same, which, in fact, was always the case with her, even under the most trying circumstances.  I have never seen a woman in my life, who would endure every species of fatigue and hardship, from month to month, and from year to year, with that unflinching courage, zeal, and patience, which she has ever done."  (Lucy Mack Smith, History of the Prophet Joseph Smith by His Mother, p. 190-91)

I am quite certain that Emma Smith was not happy and perky all the time (in fact, her granddaughter commented that she always retained a sadness in her smile), but if the Lord could advise Emma Smith to be of good cheer, He also expects us to be of good cheer in our trials which are almost undoubtedly less than hers.

Elder Marvin J. Ashton said, "If we can recall the Lord's promise, 'for I the Lord am with you'...we will find the strength to be of good cheer instead of becoming resentful, critical, or defeated."   (April 1986 General Conference)

The great Latter-day Saint parent educator, Glenn Latham, whose lectures we attended and whose books we read many times as my husband and I raised our children, wrote, "The father of a wayward son once told me, 'A parent can be no happier than his most unhappy child.'  After fifteen years of working with Mormon families in crisis, I have concluded that parental guilt, shame, and suffering for the 'sins' of their children have become modern Mormon icons...

"The admonition to 'be of good cheer' is particularly applicable to Mormon parents today who are fearing and distressed by the 'storms' that sweep over their families and threaten the very survival of their children.  'Being of good cheer' is certainly a better, more positive and constructive response than is unwarranted shame, unearned guilt, and useless suffering."  (Glenn I. Latham, "Guilt, Shame and Suffering: Modern Mormon Icons," 1987)

“We should honor the Savior's declaration to "be of good cheer." (Matthew 14:27) Indeed, it seems to me we may be more guilty of breaking that commandment than almost any other!”  (Elder Jeffrey R. Holland, Created for Greater Things)

(The story of Emma's life is depicted beautifully in the docudrama, "Emma Smith: My Story," by Candlelight Media Group.  For you Netflix subscribers, they have it in streaming.)

Thank you for your inspirational thoughts on this lesson. Because of it I have decided on a different approach and I start my lesson by sharing the beginning of the Relief Society.

I love all your lessons and I use material from them for mine. Thank you so much for posting them. I really appreciate it!

Your thoughts and insights into these lessons is wonderful. Thank you so much for taking the time to post them. They are of great help to me.

Another wonderful lesson! Thanks for sharing your knowledge and insight.