Book of Mormon Lesson #38 "Old Things Are Done Away, and All Things Have Become New"

(Note:  3 Nephi 16 is treated separately in the next blog entry.)

After explaining his basic doctrine to the Nephites after the destruction in the New World (chapter 11), Jesus Christ elaborated on what that doctrine meant in more specific and relevant terms, culminating in the announcement that the Law of Moses was now complete, and the people were to live the simple law of the gospel.

When we read these chapters of 3 Nephi, it is very instructive to take note of and mark who the audience is in each instance, especially since it is very specifically noted by the author.  I like to draw a box around the audience.  For example, in 3 Nephi 11 we read that the whole multitude fell to the earth to worship Christ, and that he invited them all to come forth and touch him and witness of his sacrifice.  Then in verse 18, he instructed Nephi to come forward and receive the authority to baptize, and in verse 22, others received this same power and the instruction in how to do it, and the doctrine of Christ was explained to these, clearly now in leadership positions.  Interesting!  He didn't teach this doctrine to everyone.

In 3 Nephi 12:1, when Christ was through speaking to Nephi and the 12 apostles, they are now called, "He stretched forth his hand unto the multitude and cried unto them, saying: Blessed are ye if ye shall give heed unto the words of these twelve whom I have chosen from among you to minister unto you and to be your servants..."  This was how the doctrine of Christ was going to be taught to everyone--just as it is today--by the leadership who received it from Christ.

(Why did he give Nephi authority to baptize when he obviously had already been baptizing?  Joseph Fielding Smith wrote, "We read that the Savior commanded Nephi and the people to be baptized again, because he had organized anew the Church under the gospel.  Before that it had been organized under the law [of Moses]."  [Doctrines of Salvation 2:336])

For discussion on the beatitudes, go to the New Testament Lesson.  There are a few notable changes to the beatitudes in 3 Nephi versus Matthew.  In verse 3:  "Blessed are the poor in spirit who come unto me..."  In verse 6:  "Blessed are all they who do hunger and thirst after righteousness, for they shall be filled with the Holy Ghost."  In verse 10:  "And blessed are all they who are persecuted for my name's sake..."  And verse 12:  "For ye shall have great joy..." And in each verse, the word all is added, perhaps not as a change from the New Testament message, but just as an emphasis.

HOW TO COME UNTO CHRIST

While explaining His doctrine briefly to the apostles, Jesus said to them twice that they must repent and become as a little child and be baptized in order to receive the Holy Ghost (3 Nephi 11:37) and ultimately to inherit the kingdom of God (3 Nephi 11:38).

In the first beatitude, he stated, "Blessed are the poor in spirit who come unto me, for theirs is the kingdom of heaven." (3 Nephi 12:3)

What exactly does it mean to become as a little child, and to come unto Christ?  Is it just a declaration of belief?  Is it just a feeling of humility?  The best commentary on scripture is always other scripture.  As we read on, we can find another phrase that clarifies that meaning:  "Therefore come unto me and be ye saved: for verily I say unto you that except ye shall keep my commandments, which I have commanded you at this time, ye shall in no case enter into the kingdom of heaven."  (3 Nephi 12:20)  To "come unto Christ" is not just an ethereal, vague thinking of Christ or a respect and awe of Him, it is a concrete following of him; it is both a state of being and of doing.

THE LAW OF MOSES vs. THE LAW OF THE GOSPEL
OR
DOING vs. DOING AND BECOMING

In the rest of Chapter 12, Jesus itemized several rules found in the Law of Moses (or more specifically the rules, traditions, and ethics codes of the rabbis originally based upon the Old Testament Law of Moses), and how they should be elevated in his not new, but newly reinstated Law of the Gospel.  For example, the ten commandments stated "thou shalt not kill," but that is simply a state of doing.  It's clear how to keep from killing someone.  But Jesus said, "whosoever is angry with his brother shall be in danger of [God's] judgment, and whosoever shall say to his brother, Raca [which is pronounced ray-cah, and means "empty," according to Andrew Skinner, on KBYU's scripture study TV program] shall be in danger of the council, and whosoever shall say, Thou fool, shall be in danger of hell fire."  (3 Nephi 21-22)  All three of those are basically the same thing: to belittle another with anger while putting ourselves above them (which is pretty much what we are always doing when we are angry, when you think about it) will condemn us.  To keep from being angry is not just a state of doing, it is a state of doing and being:  of keeping ourselves equal to our brother in our own eyes, and therefore treating him with patience and encouragement, even when he does something dumb.

Throughout the next paragraphs, Christ names other ways in which He expects his disciples to not just follow outward rules and regulations and "ethics," but ways in which He expects them to be and do what he asks, which is in every instance a way of keeping themselves humble, childlike, and one with their fellow men:
In summary, if you live this Law of the Gospel,  "ye may be the children of your Father who is in heaven; for he maketh his sun to rise on the evil and on the good" [a poetic way of saying he loves and blesses both of them] (verse 45).  By doing and being as Christ commanded, we become as He and our Father in Heaven are:  We become Unconditional Love, which is the way to peace and the way to the kingdom of God.

"Therefore, those things which were of old time, which were under the law, in me are all fulfilled.  Old things are done away, and all things have become new.  Therefore I would that ye should be perfect even as I, or your Father who is in heaven is perfect."  (verses 46-48).  Here is another important change:  In the New Testament Christ did not include himself in the sentence about who was perfect.  But now that he was glorified, he did.  No one, not even Christ himself, can be perfected in mortal life.

Chapter 13 continues examples of the importance of being while doing:
A CHANGE OF AUDIENCE

"And now it came to pass that when Jesus had spoken these words, he looked upon the twelve whom he had chosen, and said unto them:"
Notice:  He did not give this counsel to the multitude.  This was for the full-time general authorities.  The rest of us are supposed to practice provident living, store food, plan for our future, and not expect God to work everything out for us.

NOW BACK TO THE MULTITUDE WITH MORE DOINGS AND BEINGS...
Then, some extremely important counsel:  "Ask!" (verses 7-11)  So often we forget to ask the Lord our questions, and He generally does not just drop revelation upon us.  I'm quite certain that Joseph Smith said that he never received a revelation that was not the answer to a question.  I can't find the quote (if I do, I'll fill it in, or maybe someone can stick it in the comments) but it's borne out quite obviously in the Doctrine and Covenants revelations.

And one more bit of vital counsel:  How to recognize trustworthy leaders who are servants of the Lord.  (By their fruits.)  (verse 15-20)

NOT EVERYONE THAT SAYETH TO ME LORD, LORD

And so to summarize this whole concept of the importance of becoming and not just doing, Christ said, "Not everyone that saith unto me, Lord, Lord, shall enter into the kingdom of heaven; but he that doeth the will of my Father who is in heaven.  Many will say to me in that day: Lord, Lord, have we not prophesied in thy name, and in they name have cast out devils, and in thy name done many wonderful works?  (verses 21-22)  Isn't it interesting that this condemnation immediately follows Christ's pronouncement that "by their fruits ye shall know" whether someone is a disciple of Christ?

Well, fruits are apparently not just doing, but being, because "then will I profess unto them: I never knew you; depart from me, ye that work iniquity." (verse 23)  What???  They just barely said that they did all these great things in Christ's name?  What did they do wrong?  It was not what they did, it was what they were.  Christ never knew them.  In Hebrew, to know is to become as one, particularly as in a marital union.  If Christ never knew them, it is because they never became united with Him and his purpose.  What they did was only for show: for doing alone, and not for becoming.

BUILDING ON THE ROCK 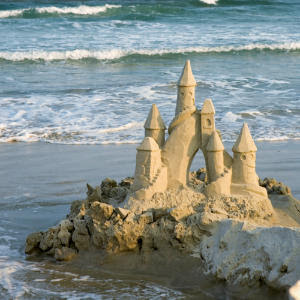 It is a very sandy foundation to be based on outward appearances and observances.  Many a Latter-day Saint has lived a dual life:  acting pious, while being base.  Living a double life never works.  Only integrity of purpose with God will create a person who can never be destroyed, no matter what rains descend upon, no matter what floods crash down upon him, and what whirlwinds pull at him to tear him to pieces.  The person who follows Christ in both what he does and what he becomes inside, is the person who will inherit the peace of Christ both in this world, and in the world to come. 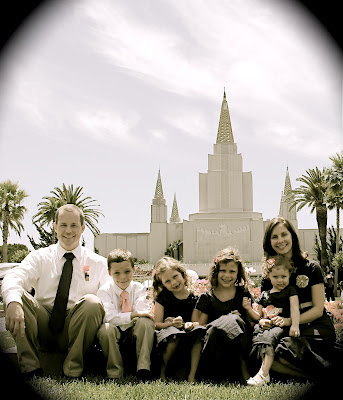 My niece Natalie Hanson and her young family
outside the Oakland Temple.
She holds the copyright but you may use it for teaching.

Labels: Beatitudes, being, gospel of Jesus Christ, Law of Moses

I appreciate your insights always to your lesseon, Thank you

The picture of your neice in front of the temple is the Oakland Temple not the Los Angeles Temple.. Just an FYI. this is the first temple that I went to.

Thanks, Lori. I love compliments and I love editorial help.

Thanks for your insights and for making this available. I really enjoy the things you pick out of the scriptures that I miss completely.

Thank you, Adam. Your comment was an answer to prayer for me today, like a little hug from God.

Wonderful, inspired and so inclusive. You have a gift. Thank you or letting your "light so shine!"

Your website is an invaluable tool that I use to help me as I prepare my lessons. I love the way you structure the material and make it understandable. You're a gifted woman, thanks for sharing.

I always learn from your lessons, and am so thankful for your insight. I've been teaching Gospel Doctrine each week for 4 years now, and your lessons have been a huge source of inspiration for me. Thank you so much!