In chapter 8 of 3 Nephi we find what is probably the most detailed account of an event that is recorded anywhere in the Book of Mormon: the destruction in the New World at the death of Christ.  A precise account was obviously very important since it is prefaced by this guarantee:

"And now it came to pass that according to our record, and we know our record to be true, for behold, it was a just man who did keep the record--for he truly did many miracles in the name of Jesus; and there was not any man who could do a miracle in the name of Jesus save he were cleansed every whit from his iniquity--And now it came to pass, if there was no mistake made by this man in the reckoning of our time, the thirty and third year had passed away..."  (3 Nephi 8:1-2)

The Christians were expecting the prophecies of Samuel to be fulfilled any time.  In the first month of the 34th year on the fourth day, "there arose a great storm, such an one as never had been known in all the land." (3 Nephi 8:5)  This storm contained just about every kind of natural disaster known to man: thunderstorms, hurricanes, tsunamis, tornados, earthquakes, floods, fire, mudslides.  The storm only lasted for three hours, but it did massive destruction, completely changing the face of the land. 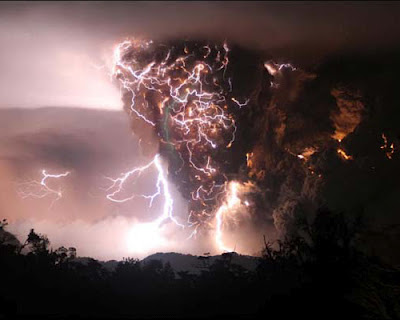 (The Chaiten Volcano eruption in Chile.
Photo by Evan Ackerman, who writes, "The plume of ash is thought to generate enough static electricity to cause what is called a 'dirty thunderstorm' in the same way that colliding ice particles provide the juice for regular thunderstorms.")

When it was over, a thick darkness covered the land.  Perhaps it was caused by volcanic ash, or smoke, or dust, or all of them together, but it was so thick that it prevented any type of light to shine, even with "exceedingly dry wood."  This darkness lasted for three days.  It brought the people to their knees in remorse because they knew it was the judgment of God (3 Nephi 8:24-25).

Finally, they heard a voice, the voice of God, saying "I told you so:" declaring that it was indeed his wrath that had caused the fearsome events, just as Samuel the Lamanite had prophecied.  He itemized the disasters (3 Nephi 9:3-12) and then he said, "O all ye that are spared because ye were more righteous than they, will ye not now return unto me, and repent of your sins, and be converted, that I may heal you?" (3 Nephi 9:13)  God selected individuals to be spared amid great earthly upheaval.

Living in a day when natural disasters have been prophesied concerning the second coming of Christ, it is important for us to know how these individual people qualified to be saved.  Chapter 10 verse 12 gives us the simple answer:  "And it was the more righteous part of the people who were saved, and it was they who 1) received the prophets and 2) stoned them not; and it was they who 3) had not shed the blood of the saints, who were spared--And they were spared and were not sunk and buried up in the earth; and they were not drowned in the depths of the sea; and they were not burned by fire, neither were they fallen upon and crushed to death; and they were not carried away in the whirlwind; neither were they overpowered by the vapor of smoke and of darkness."

The bottom line is pretty simple:  We'd better listen to and obey the General Conference addresses! 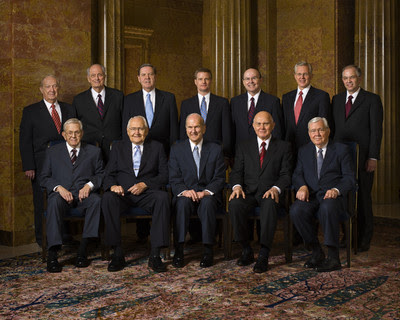 The only "natural disaster" to fear is the disaster of remaining a "natural man," because  "...the natural man receiveth not the things of the Spirit of God; for they are foolishness unto him; neither can he know them, because they are spiritually discerned."  (1 Cor. 2:14)  "For the natural man is an enemy to God, and has been from the fall of Adam, and will be, forever and ever, unless he yields to the enticings of the Holy Spirit, and putteth off the natural man and becometh a saint through the atonement of Christ the Lord, and becometh as a child, submissive, meek, humble, patient, full of love, willing to submit to all things which the Lord seeth fit to inflict upon him, even as a child doth submit to his father.  (Mosiah 3:19)

Once He had their attention, Jesus Christ issued a call to the survivors:  "Yea, verily I say unto you, if ye will come unto me ye shall have eternal life.  Behold, mine arm of mercy is extended towards you, and whosoever will come, him will I receive; and blessed are those who come unto me." (3 Nephi 9:14)  He identified himself as Jesus Christ, by whom "redemption cometh, and in [whom] is the law of Moses fulfilled...the light and the life of the world...Alpha and Omega, the beginning and the end." (3 Nephi 9:15-18). 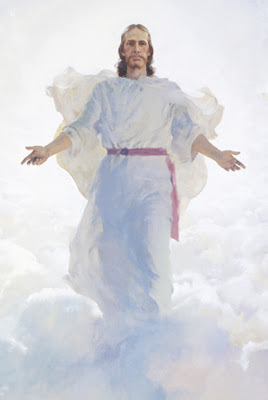 The people at this point, had faith in Jesus Christ, because they had "received the prophets," and because it was pretty hard not to believe in Jesus Christ considering the present circumstances.  Jesus Christ offered them forgiveness on condition of repentance (3 Nephi 9:13).  Then he promised them the Gift of the Holy Ghost (3 Nephi 9:20).  And as soon as He actually appeared to them and ministered among them, and allowed them to witness his wounds and praise His name (3 Nephi 11:13-17), He gave Nephi authorization to baptize (3 Nephi 11:18-21).  Of course, Nephi already had the power to baptize (3 Nephi 1:23), but now everyone knew that he was the man to go to.  And they knew the exact manner in which baptisms should be performed, which had apparently been in dispute (3 Nephi 11:23-30).

Once Christ appeared to the people and they were able to touch him and witness his scars, he repeated his message.  "Behold, very, very, I say unto you [remember, this is the important attention phrase in the Book of Mormon], I will declare unto you my doctrine.  And this is my doctrine, and it is the doctrine which the Father hath given unto me...and I bear record that the Father commandeth all men, everywhere, to repent and believe in me.  And whoso believeth in me, and is baptized, the same shall be saved; and they are they who shall inherit the kingdom of God...and unto him will the Father bear record of me, for he will visit him with fire and with the Holy Ghost." (3 Nephi 11:31-35)

And to be sure they got the message, he stated it once more:  "And again I say unto you, ye must repent, and become as a little child, and be baptized in my name, or ye can in nowise receive these things."  (3 Nephi 11:37).  What things?  The witness of the Father given through the Gift of the Holy Ghost (3 Nephi 11:35-36).

And in case they didn't get it that time, he stated it once more in almost identical phrasing but with a different ending.   "And again I say unto you, ye must repent, and become as a little child, and be baptized in my name, or ye can in nowise inherit the kingdom of God."  (3 Nephi 11:38).

Jesus impressed upon the people the importance of living his doctrine:   "Verily, verily, I say unto you,"  [there is that important attention phrase again!] "that this is my doctrine, and whoso buildeth upon this buildeth upon my rock, and the gates of hell shall not prevail against them."  (3 Nephi 11:39)

The message has not changed for us today.

"Therefore, whoso repenteth and cometh unto me as a little child, him will I receive, for of such is the kingdom of God.  Behold, for such I have laid down my life, and have taken it up again; therefore repent, and come unto me ye ends of the earth, and be saved." (3 Nephi 9:22) 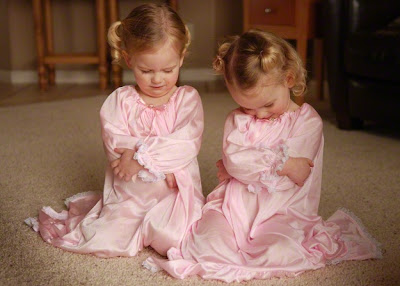 (Picture from LDS.org)
Posted by Nancy Wyatt Jensen at 4:21 AM

Why do you suppose that the New World suffered so much physical destruction surrounding the death of the Savior, and the area around Jerusalem did not experience anything close to that magnitude?

Interesting question! The result of all the destruction was that the remainder of the people were willing to listen to Christ and become one of the most righteous civilizations for one of the longest periods in history. My best guess is that the Lord knew that would happen. "He doeth not anything save it be for the benefit of his children." Perhaps in Israel there would have been no benefit.