The Measure of Our Faith 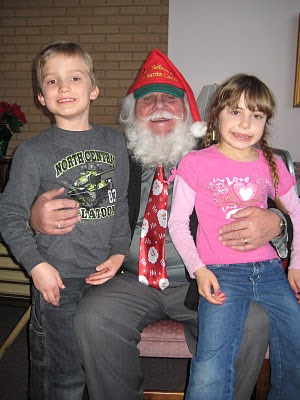 Just a couple of days before Christmas, as I was driving my two 9-year-olds to Grandma’s, Marisha said, “I’m going to stay up all night Christmas Eve and find out if Santa is really real.” But Ammon said, “Not me. I don’t want to know. I want to believe.”

Elder Michael T. Ringwood, in this past General Conference, said he had been drawn repeatedly over the past several months to a statement in the scriptures, Helaman 6:36: “And thus we see that the Lord began to pour out his Spirit upon the Lamanites, because of their easiness and willingness to believe in his words.” This is an amazing scripture. These were the Lamanites, who had been led in the opposite direction for centuries by their fathers.

Elder Ringwood puzzled over the question, “What happened to cause a people full of hatred and disbelief to have an easiness and willingness to believe in the word of God?” 8,000 of them had listened to the voices of Nephi and Lehi as they taught by the Spirit, and had been converted. 300 more were converted through the miracle of hearing a voice as they went forth to harm Nephi and Lehi. And many more were converted through the testimony of those 300. As they were converted, they immediately began living the gospel. They cast down their weapons and habits of war, they studied the word of God, and they obeyed the commandments. They had great faith which enabled them to endure to the end at the peril of their lives (Helaman 15:5-9).

Samuel the Lamanite explained that “because of their steadfastness when they do believe in that thing which they do believe…because of their firmness when they are once enlightened, behold the Lord shall bless them and prolong their days, notwithstanding their iniquity,” speaking not just of this individual group, but also of the entire Lamanite nation (Helaman 15:10).

At the same period of time, the Nephites, who had a heritage of belief and obedience, became “hardened, impenitent, and grossly wicked” (Helaman 6:2) and their civilization was eventually cut off from the face of the earth.

Our lives sometimes go through stages of an easiness to believe, and sometimes a hardness of heart. Elder Ringwood suggests that times of significant change, times of intense service, times of trial, times of learning new principles, and times in our youth and childhood are often times when it is easier to believe. We are commanded to create more of these times in our lives, by becoming as little children, that we may inherit eternal life (3 Nephi 11:38). He says that as we reflect upon these times, we “will find what really brought an easiness and willingness to believe were not the circumstances but the commitment to live the gospel during these periods of life.” He says, “Daily living of the gospel brings a softness of heart needed to have an easiness and willingness to believe the word of God.”

A BELIEVER FROM THE DOCTRINE AND COVENANTS

We are all very familiar with Martin Harris, the third witness of and financier of the Book of Mormon, who at many times of his life had a difficult time believing. This disbelief led to the loss of the Book of Lehi, and it led to many years of estrangement from the Church. Very few of us are familiar with his older brother, Emer. But we should be!

Because Emer had an easiness and willingness to believe. Hearing of the golden Bible, Emer had walked 25 miles to learn more about it from his brother, Martin. When the book was published, Martin picked up the first bound copy off the press and handed it to Emer.

Emer joined the church early in 1831. He was a scribe for Joseph for a short time. He was called to serve a mission with Simeon Carter (D&C 75:30), but switched companions and served with his brother Martin. They baptized 82 people in one place, 100 at another, and organized a branch of 70 in Pennsylvania.

Emer was a skilled carpenter who built the window sash in the Kirtland Temple. Later, he used the same tools to build the winding stairway in the Nauvoo Temple.

He and his family arrived in Missouri just in time to be thrown out by the extermination order. Among the meager possessions he carried with him at the exodus was a chest in which he had fitted a false bottom for the safe transport of copies of the Book of Mormon. The mob did search his belongings, including the chest, but his preparation saved the books.

Emer was 69 when the Saints moved west, and he moved with them. His patriarchal blessing stated, “Thou has[t] not fainted in times of disease and persecution when every evil thing has [been] spoken against the church of the Living God. Thou hast endured in faith. The Lord is well pleased with thee because of the integrity of thy heart.” After he arrived in Utah, he also became a patriarch and was known as a great healer. He died at the age of 88 and is buried in the Logan Cemetery. (You can see a photo of his headstone here.)

And now, let’s examine a great believer from the Bible, John the Beloved. Have you ever wondered where the name “John the Beloved,” came from? Was he loved more than the other disciples? Did Jesus name him that? No. Jesus gave him the title “Son of Thunder.” In the heading of the Book of Revelation, he is referred to as “St. John the Divine,” meaning one who sees the future. He is often called “John the Revelator” because of his visions.

So who came up with “John the Beloved?” Well, you don’t find that particular title in the Bible, but you find the origin of it: Five times in his gospel, John referred to himself as “that disciple whom Jesus loved.” It was not that Jesus loved him more than others; it was John’s own acceptance, appreciation, and emulation of that love that made him into “John the Beloved.”

His perception of this great love led him to desire to labor in the Lord’s kingdom for the salvation of His children until Christ should come again. He’s already been doing that for 2,000 years.

If we were to follow the example of John, we would be looking for evidences of the Lord’s love in our lives every day, and we would be thinking of ourselves in terms of God’s love for us. If we were to do this, we would lose all need for self-confidence or that elusive mirage, self-esteem. Both would be replaced by faith in God. We would also let go of our need to compare, our need to compete, and our compulsion to view our inadequacies in a depressing light that shuts out the Spirit and prevents us from loving others. Imagine thinking of yourself as “[insert your name here] the Beloved.” It would change your life. As John himself wrote, “We love him, because he first loved us.” If we comprehended how much God loved us, we would then want to love Him, and that would make all the difference in our lives, as it did in John’s.

LOVE IS THE MEASURE OF OUR FAITH

President Utchdorf said, “Since ‘God is love,’ the closer we approach Him, the more profoundly we experience love.” He said, “God’s love is so great that He loves even the proud, the selfish, the arrogant, and the wicked.” Can we do that?

I love this quote from Sue Monk Kidd: “That’s the only purpose grand enough for a human life—not just to love, but to persist in love.”

President Uchtdorf stated, “The divine love of God turns ordinary acts into extraordinary service…Love is the guiding light that illuminates the disciple’s path and fills our daily walk with life, meaning, and wonder. Love is the measure of our faith, the inspiration for our obedience, and the true altitude of our discipleship.” That’s why we must “pray unto the Father with all the energy of heart [to] be filled with this love” (Moroni 7:48).

We need to become like John the Beloved and see the love of God in our everyday lives, that we may also live the love of God. Let’s follow the counsel of President Utchdorf: “In your daily interactions with others, in the words of a hymn, in the laughter of a child, listen for His voice. If you listen for the voice of the Father, He will lead you on a course that will allow you to experience the pure love of Christ.” And this promise brings our lesson full circle: “As we draw near to Heavenly Father, we become more holy. And as we become more holy, we will overcome disbelief and our souls will be filled with His blessed light.”

LIVE IN THE CHILD’S NATIVITY 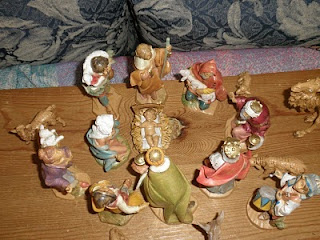 (You may want to bring a nativity set and ask a young child to arrange it for you before class as an illustration of the paragraph below.)

As children will always arrange a nativity set with Jesus in the middle and everyone else facing him in a tight circle, we must so live our lives. “Because love is the great commandment, it ought to be at the center of all and everything we do in our own family, in our Church callings, and in our livelihood” (Elder Uchtdorf). We must put Christ at the center of our circle. (See previous post.)

“My dear brothers and sisters, don’t get discouraged if you stumble at times. Don’t feel downcast or despair if you don’t feel worthy to be a disciple of Christ at all times. The first step to walking in righteousness is simply to try. We must try to believe.” We must “choose to listen.” We must “try and keep on trying” (Elder Uchtdorf).  We must "educate our desires" (Elder Maxwell).  Ammon said he didn’t want to know about Santa, because he wanted to believe in him. With a testimony of Christ, it is the opposite: We first believe so that we may later know.

“An easiness to believe will come when the word of God is etched into our hearts” (Elder Ringwood). In our homes and families, we need to create an environment and live traditions that "educate our desires," and make it easy for us and our children to believe.