POP QUIZ:  WHO IS THIS GREAT MAN?
THE CHILDREN OF ABRAHAM

As stated in the previous post, God was with both of Abraham's sons, Ishmael and Isaac.  Both were blessed by the covenant made to Abraham, although Isaac was the birthright son and therefore received both greater blessings and greater responsibilities.  Through Ishmael's twelve sons the Arab nation was born.  Through Isaac's twelve grandsons, the Israelites came.  Both nations have always kept the covenant of circumcision, even to this day.  Both nations live in the Holy Land and claim it as their Promised Land.  Both nations believe that Abraham was asked to offer their ancestor (Isaac or Ishmael) as a sacrifice to God.  The site of the sacrifice is sacred to both nations and is now the site of the Dome of the Rock, a beautiful Muslim mosque. 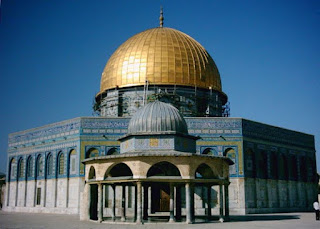 All the families of the earth have been blessed (Gen. 12:3) because of the descendants of Isaac, the House of Israel, who preserved the Bible, and who bear the gospel to the world through the Priesthood, as well as the one great Descendant, Christ, who offered the infinite Atonement for the sins of all mankind.  But the families of the earth have also been blessed by the great nation which eventually came forth from Ishmael: the Muslims.  The Muslim people have influenced the course of world history in many great ways.  There are more than one billion Muslims in the world, almost one-fifth of the world population.

To understand the Arab nations, the children of Ishmael, one must understand Islam, their predominant religion, because every activity in the life of a Muslim (one who practices the Islamic religion) is spiritually oriented.  The word Islam means "submission to Allah;" the word Muslim means "one who submits."  This is not a passive but an active state, actively seeking righteousness, something Father Abraham did (see Abr. 1).  They are not secularized or compartmentalized as most Westerners are, reserving religion for certain areas of life, separating church and state.


So, now, the answer to the pop quiz above:

The founder of Islam, Muhammad, was born in Mecca about 570 A.D., in the midst of the Great Apostacy.  He was an influence for good, always trying to resolve difficulties between people.  Muhammad prayed to the same God his ancestor Ishmael cried unto in the desert, the God of Abraham, our Heavenly Father, in Arabic: Allah.  At about 40 years of age, after spending much time in meditation and prayer, he reported experiencing a vision in which the angel Gabriel appeared and told him he would be a prophet.  Although he was constantly unsure of his ability to be a prophet, his wife and uncle encouraged him (James A. Toronto, "A Latter-day Saint Perspective on Muhammad," Ensign, Aug. 2000; see also Hugh Nibley, "Islam and Mormonism--A Comparison," Ensign, Mar. 1972.)

Muhammad recognized that both Judaism and Christianity had become corrupt and apostate.  Although at first he met with great opposition, before his life was over, Muhammad's following was great, and the change he effected was tremendous.  "In the short span of 20 years between his calling as a prophet and his death, Muhammad uplifted an entire country, on every side.  He not only persuaded all Arabia to worship only one God, but to apply their religion to every aspect of morality, law, and social organization...In this world, waiting for the liberating voice of God, Muhammad had the eloquence, conviction, and intensity of an inspiring preacher; the courage, chivalry, and success of an admirable soldier" (James B. Mayfield, "Ishmael, Our Brother," Ensign, June 1979).

So was Muhammad really a prophet?  Well, yes, in a way.  Not a prophet in the sense of holding the keys of a dispensation of the gospel; he had no priesthood authority, living as he did during the time of the Great Apostacy.  But as a messenger of God who brought a great deal of truth and light to the world, a resounding yes.  "For behold, the Lord doth grant unto all nations, [people] of their own nation and tongue, to teach his word, yea, in wisdom, all that he seeth fit that they should have" (Alma 29:8).

"While the Church of Jesus Christ of Latter-day Saints is established for the instruction of men; and it is one of God's instrumentalities for making known the truth, yet he is not limited to that institution for such purposes, neither in time nor place.  God raises up wise men and prophets here and there among all the children of men, of their own tongue and nationality, speaking to them through means that they can comprehend...All the great teachers are servants of God, among all nations and in all ages.  They are inspired men, appointed to instruct God's children according to the conditions in the midst of which he finds them" (B.H. Roberts, Defense of the Faith and Saints, 1:512-51).

There are many, many Muslim sects with variations on beliefs, but the following are basic to all:

The Five Pillars of Islam
Their holy book, the Qur'an, or Koran, means "recitation."  Its origin comes from Muhammad's recitations while in his frequent translike states, words he said he received from the angel.  The Qur'an itself affirms that the Old and New Testaments are a part of their religion, as it says in the second chapter: "We believe in Allah and that which is revealed unto us and that which was revealed unto Abraham, and Ishmael, and Isaac, and Jacob, and the tribes, and that which Moses and Jesus received, and that which the Prophets received from their Lord" (Qur'an 2:136).  The Qur'an also contains stories about the prophets of the Old and New Testaments.

So do Muslims believe in Jesus?  Yes, but not as the Christ.  They believe he was the greatest prophet prior to Muhammad, but they do not believe he was the literal Son of God who atoned for our sins.  They think that he was taken into heaven, and another was substituted for him on the cross.

What is the message of the Qur'an?  That God is the Creator and Judge of man, that God spoke to prophets (although Muslims now believe that Muhammad was the last and God never spoke again), that we will be held accountable for what we do, and that everyone should obey God's laws.  Reading the Qur'an and becoming familiar with its contents would help LDS people to communicate the gospel message to Muslims.  It is full of beautiful and inspired messages, such as:  "Charity extinguishes sin as water extinguishes fire."

GOD OFFERS LIGHT TO ALL HIS CHILDREN

"The great religious leaders of the world such as Mohammad, Confucius, and the Reformers, as well as philosophers including Socrates, Plato, and others, received a portion of God's light. Moral truths were given to them by God to enlighten whole nations and to bring a higher level of understanding to individuals" (First Presidency Statement, Feb. 15, 1978)

Apostles George A. Smith and Parley P. Pratt lectured extensively on Muhammad's leadership qualities in 1855. Elder Smith testified that Muhammad was "descended from Abraham and was no doubt raised up by God on purpose" to preach against idolatry. Elder Pratt asserted that "[Muslims] have better morals and better institutions than many Christian nations" (Deseret News, Oct. 10, 1855).

"In a...meeting with Muslim dignitaries, Elder Neal A. Maxwell of the Quorum of the Twelve Apostles focused on the common spiritual heritage of Mormons and Muslims. After quoting a verse from the Qur’an, he observed:  'God is the source of light in heaven and on earth. We share the belief with you. We resist the secular world. We believe with you that life has meaning and purpose. … We salute you for your concern for the institution of the family. … Mutual respect, friendship, and love are precious things in today’s world. We feel those emotions for our Islamic brothers and sisters. Love never needs a visa. It crosses over all borders and links generations and cultures'"  (James A. Toronto, "A Latter-day Saint Perspective on Muhammad," Ensign, Aug. 2000).

A cabinet minister in Egypt said to Elder Howard W. Hunter, then an apostle, "If a bridge is ever built between Christianity and Islam, it must be built by the Mormon Church" (Hugh Nibley, Ensign, Mar. 1972, p. 55).  Indeed we can do this, because we can confidently tell our Muslim friends that we belong to a church that affirms the truths taught by Muhammad. "Every truth found in every church in all the world, we believe. But we also say this to all men--come and take the added light and truth that God has restored in our day.  The more truth we have, the greater is our joy here and now; the more truth we receive, the greater is our reward in eternity. This is our invitation to men of good will everywhere" (Elder Bruce R. McConkie, quoted in Russell M. Nelson, "Teach Us Tolerance and Love," Ensign, May 1994, p. 70).  That is the message that we, as Isaac's children, are obligated, through the Abrahamic Covenant, to offer to our cousins, the Muslims, the children of Ishmael.

Update: Daniel Peterson has written another excellent article on this topic in the April 2018 Ensign: "Understanding Islam." I highly recommend it!
Posted by Nancy Wyatt Jensen at 7:30 PM

I like the way your mind works. Your organization stands out. My gospel study has improved a lot from your lessons.

Thanks, Lisa! I appreciate your feedback so much!

Thanks for your insights on our church's perspective on Islam. You put together such a beautiful article. Thanks!

You have chosen some wonderful quotes from the koran, but I have read some that are quite horrific, against Christians and even more so against Jews. I do not see how you can praise something that even though it has some similar ideals, also espouses some very horrible ideals. I am not sure how to approach this

Kay, I'll be honest: although I own a copy of the Kuran, I have not read it through. That is why everything in my blog post here comes from other people's research published in Ensign articles. I don't trust my own knowledge as it is very slim. That said, I have read the whole Bible, and there are also some troublesome and violent passages in the Old Testament (such as commands to annihilate whole groups of people, as when the Israelites took over Canaan) and yet we honor it as scripture. In both cases, I presume there is a huge cultural difference between the people for whom the books were written initially and our civilization today.