THE FAITH OF MOSES

The great treatise on faith, written by Paul to the Hebrews (chapter 11), itemizes many of the great prophets (plus three women, if you include Moses' mother) as examples of great faith.  Most of them receive one verse, or two, but Paul gave Moses center stage with six verses, citing four different ways in which Moses showed great faith.  Apparently Moses learned well the lesson he was taught by God, that he did not need to be a great leader, he just needed to have faith in the Lord's help.  (See "Here Am I...Or Who Am I?" in a previous post.)

"(1) By faith Moses, when he was come to years, refused to be called the son of Pharaoh's daughter; Choosing rather to suffer affliction with the people of God, than to enjoy the pleasures of sin for a season; Esteeming the reproach of Christ greater riches than the treasures in Egypt: for he had respect unto the recompence of the reward. (2) By faith he forsook Egypt, not fearing the wrath of the king: for he endured, as seeing him who is invisible. (3) Through faith he kept the passover, and the sprinkling of blood, lest he that destroyed the firstborn should touch them. (4) By faith they passed through the Red sea as by dry land: which the Egyptians assaying to do were drowned"  (Heb. 11:24-29).

"The ancients always saw Moses' leading his people through the Red Sea as the type and similitude of a baptism, symbolizing at one and the same time death, birth, victory and purification from sins" (Hugh Nibley, "A Strange Thing in the Land," Ensign, July 1976).  Some LDS scholars theorize that baptism was the literal purpose that the Children of Israel went to the Red Sea, which was otherwise not a logical direction.  It makes sense, remembering that the reason the Lord wanted Pharoah to let His people go was so that they could serve him.  Baptism is the only way for the believer to enter into the path of worship.

Below is the map of the route the Children of Israel took during their travels in the wilderness from Egypt to Canaan.  It is immediately apparent that they did not take a direct route.  Why not?  Because of the very reason that Moses described the journey as taking 40 years; the journey prepared them to enter the promised land.  (See The Importance of the Number 40 in the Bible in the previous post.)  As the Joseph Smith Translation tell us of all those great and faithful men and women noted by Paul, "God having provided some better things for them through their sufferings, for without sufferings they could not be made perfect" (JST Heb. 11:40). 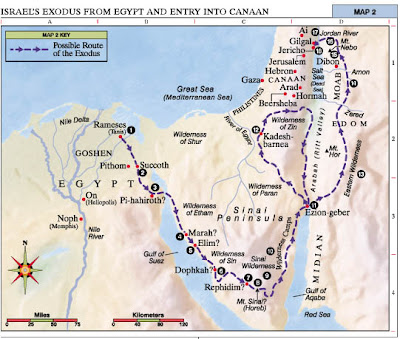 (For a larger view, and details of all the events occuring along the way, click here.)  So the journey was a probationary period, in which they learned and proved themselves, eventually, to be obedient to God.  Therefore, it had to be "40 years", the full time period necessary to prove and prepare the people, even if that meant increasing the distance.  But at the same time of their proving, God proved His faithfulness to them by blessing them whenever they needed help, even when they didn't deserve it.  He led them by a pillar of fire to the shores of the Red Sea, and carried them safely across, destroying their enemies.  He fed and watered them through the desert, and fought their battles when conflict arose.

Alec Moytner wrote in his book, The Story of the Old Testament, "Israel has come out of Egypt as the Lord's redeemed.  They have sheltered under the blood of the Lamb.  Their promised destination is Canaan, but as they follow the guiding pillar, it is not to the promised land that they come but to Sinai, the mountain of covenant law.  The theological truth here is that those who have been redeemed by the blood of the lamb must come to the place where they hear the law of the Lord" (p. 30).  Alec Moytner is not LDS, but he hits so close to the truth:  Those who have been freed by the remission of their sins, and redeemed by their baptism into the Kingdom of God, are then expected to come to the Temple, where they hear the covenant law of the Lord.

"What was the object of gathering...the people of God in any age of the world?...A man never has half so much fuss to unlock a door, if he has a key, [than if] he...had to cut it open with his jack-knife.  The main object [of gathering] was to build unto the Lord a house whereby He could reveal unto His people the ordinances of His house and the glories of His kingdom, and teach the people the way of salvation" (Teachings of the Prophet Joseph Smith, p. 307-308).

"This is why Adam blessed his posterity: he wanted to bring them into the presence of God.  They looked for a city...'whose builder and maker is God' (Heb. 11:10). Moses sought to bring the children of Israel into the presence of God, through the power of the Priesthood, but he could not.  In the first ages of the world they tried to establish the same thing; and there were Eliases raised up who tried to restore these very glories, but did not obtain them; but they prophesied of a day when this glory would be revealed" (TPJS, p. 159).

A TYPE FOR ALL BELIEVERS

In Hebrews 3, Paul tells us that not only was Moses a type of Christ, but the Children of Israel were symbolic of
all who would belong to the Kingdom of God and hope to enter into His presence.

At the end of the journey, as he was about to depart from them, Moses reviewed the Exodus and Journey into the Promised Land in his last sermon to his people, and itemized several important truths regarding probationary experiences:

Trials are tests:  "And thou shalt remember all the way which the LORD thy God led thee these forty years in the wilderness, to humble thee, and to prove thee, to know what was in thine heart, whether thou wouldest keep his commandments, or no" (Deut. 8:2).  There is never a shortcut through our trials, because the entire probationary process is necessary to attain the growth and edification.  When the trials are past, and times are easier, it is important for us to take the effort to remember the aid we received.

Trials make you learn to depend on the Lord:  "And he humbled thee, and suffered thee to hunger, and fed thee with manna, which thou knewest not, neither did thy fathers know; that he might make thee know that man doth not live by bread only, but by every word that proceedeth out of the mouth of the LORD doth man live" (Deut. 8:3).  When things are going well, we can feel a gratitude toward God, if we remember, but when we are hanging onto peace and life and sanity by a thread, we must get up every single morning and search for that manna in our prayers and in our scriptures.  We realize, in the hard times, our utter dependence upon God.

The Lord makes you strong enough to survive the journey:  "Thy raiment waxed not old upon thee, neither did thy foot swell, these forty years" (Deut. 8:4).  We are always given what we need to complete the journey.  But never a free ride.

The Lord is teaching you:  "Thou shalt also consider in thine heart, that, as a man chasteneth his son, so the LORD thy God chasteneth thee"(Deut. 8:5).  Although it is hard to believe it at the low times, God gives us trials because He loves us, therefore, there is no reason to think "why me?"  We are children of God.  Our Father will teach and train us, even if it is unpleasant.  That's what good parents do.

Therefore always trust in the Lord through the trials, knowing the end result will be worthwhile:  "Therefore thou shalt keep the commandments of the Lord thy God, to walk in his ways, and to fear.  For the Lord thy God bringeth thee into a good land..." (Deut. 8:6-7).  Every purpose of the Lord in our lives is to fit us for the kingdom, to make us into celestial people so we can enter and enjoy the celestial kingdom.  The end of the journey will be so glorious, it will dwarf the trials.
Posted by Nancy Wyatt Jensen at 8:34 PM

Enjoy your insights. Thought I'd add one more. Oct2010ddn

Sorry about that. The last post deleted my symbolic statement. Oct2010dn