Old Testament Lesson #19 "The Reign of the Judges"

According to Camille Fronk Olson, "The title of judge assumed neither a line of succession, nor permanent assignment, nor absolute power.  It is uncertain whether judges were called to serve by the Lord or by the voice of the people.  Whatever the case, they appear to have been selected because of their particular wisdom, valor, leadership capacity, or trust in the divine" (Women of the Old Testament, p. 112).

Twelve judges are itemized in the Book of Judges:  Othneil, Ehud, Shamgar, Deborah, Gideon, Tola, Jair, Jephtha, Ibzan, Elon, Abdon,and Samson.  "Six of the judges probably acted as strong tribal leaders rather than heroic deliverers and are mentioned only briefly; however, stories of the other six judges are full of heroic deeds and colorful episodes...

"In these charismatic judge stories, a pattern repeats itself over and over as it does in the Book of Mormon. The Israelites do that which is wrong in the sight of the Lord; they forget their covenant with the Lord and choose to follow the beguiling gods of other peoples. They are tested and tried by one or another of the other peoples in Canaan until the Israelites remember their covenants (Judg. 2:20–23; Judg. 3:1–4).  After some years of tribulation and regret, the Israelites remember the Lord and repent of their wickedness; they cry out for help. A leader arises who, with the Lord’s help, saves the people from their oppressors. The people then enjoy peace for a time...

"Samson followed the sin-chastisement-repentance-deliverance pattern in his own life as he waged his war against the Philistines (Judg. 14–16)"  (Kristen E. Lichman, "Deborah and the Book of Judges," Ensign, January 1990).

"Although they didn’t hold the priesthood and did not have equal authority with the prophets, prophetesses—inspired women with strong testimonies called upon by the Lord to perform various tasks—do not seem to have been unusual in ancient Israel. The writer of the book of Judges shows no astonishment concerning Deborah’s role as prophetess, judge, and deliverer" (Lichman).

The amazing story of the battle involving Deborah is briefly told in a page and a half of scripture (Judg. 4), repeated in another page and a half (Judg. 5) in poetic form.  The children of Israel were confronted by the Canaanites.  Barak, an Israelite captain, was called upon by Deborah to lead the battle, and to muster "ten thousand men" (Judg. 4:6). The word alafim, translated as "thousand" in military passages in the Old Testament, probably means a unit of professional soldiers, possibly 300 men (Harper-Collins Study Bible, p. 381; "A Problem With Numbers", LDS Institute Old Testament Student Manual, Enrichment Section E; Olson, Women of the Old Testament, p. 116).  This might possibly mean that Barak's army consisted of 3,000 troops.  However, it is not necessary to know the number of soldiers to know that the Israelites were vastly outnumbered, once we read that the Canaanites had an army of "chariots of iron," (very possibly the actual number given, 900) accompanying their "host" or army of foot soldiers (Judg. 4:13,15).

"The Canaanites...used chariots as their primary weapon.  Three fully armed [soldiers] rode in each chariot box: one guided the chariot, one attacked with a sword or lance, and one guarded the occupants from enemy blows with a large shield.  In all probability, the entire chariot would not have been made of iron, but the chariot box would have been plated with iron with, perhaps, iron scythes projecting from the axle on either side to protect the lower body of the soldiers who drove it" (Olson, p. 119).

Chariots, of course, had wheels and were therefore only functional on fairly flat land.  They could not attack Barak and his troops while they were camped on Mount Tabor.  But the Lord had said to Barak through Deborah, "I will draw unto thee to the river Kishon[,] Sisera, the captain of [the Canaanite] army, with his chariots and his multitude; and I will deliver him into thine hand" (Judg. 4:7).

Barak was very frightened to fight this battle and refused to go unless Deborah was there to lead with him (verse 8).  Deborah must have been extremely courageous (or in other words, filled with faith), for Barak, although apparently lacking faith in himself and in the Lord, had faith in her presence. Barak's name means "lightning" (see Bible Dictionary), perhaps a foreshadowing of the way in which the Lord would fight his battle.  Was Barak's lack of faith the reason that, although in the previous verse the Lord said he would deliver Sisera into Barak's hand (verse 7), in the following verse Deborah said that the battle would not be for Barak's honor, but that the Lord would give the victory to a woman (verse 9), a gutsy, daring, clever woman like Deborah?

So the Israelites descended from the mountain and entered the valley where they were wholly exposed to the fearsome state-of-the-art weapons of destruction, the chariots.

THE LORD FIGHTS THE BATTLE

In the first telling (Judg. 4), we don't get much information about how the battle was actually won. The narrator simply tells us that "the Lord discomfited Sisera and all his chariots and all his host." But in the second telling (Judg. 5), we read, "the earth trembled, and the heavens dropped, the clouds also dropped water. The mountains melted [or quaked] from before the Lord" (verses 4-5). "Zebulun and Naphtali [the tribes that offered the most soldiers for the battle] were a people that jeoparded their lives unto the death in the high places of the field. The kings came and fought, then fought the kings of Canaan in Taanach by the waters of Megiddo; they took no gain of money. They fought from heaven; the stars in their courses fought against Sisera. The river of Kishon swept them away, that ancient river, the river Kishon. O my soul, thou hast trodden down strength. Then were the horsehoofs broken by the means of the pransings, the pransings of their mighty ones" (verses 18-22).

You can view pictures of Megiddo and the Jezreel Valley at BiblePlaces.com.

"Megiddo was a strategically located fortified city that had not yet been conquered by the Israelites.  Taanach was a swampy, poorly drained area of the Jezreel Valley that easily flooded when the nearby Kishon River overran its bounds in a rainstorm" (Olson, p. 120). 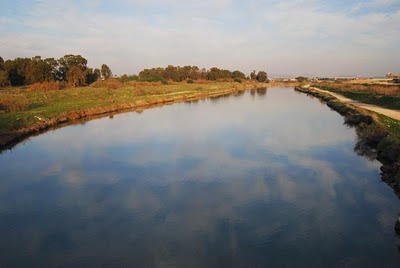 So the battle was fought "from heaven" by way of a thunderstorm and flash flood.  The mighty instruments of death, the chariots, were stuck in the mud, their unshod horses breaking their hooves, and leaving the soldiers stationery and vulnerable.  The ancient historian Josephus adds that a fierce wind accompanied the storm, which blew into the faces of the Canaanites, but at the backs of the Israelites, furthering Barak's advantage" (Antiquities, 5.5.4, quoted in Olson).

Sisera himself fled the battle, and sought asylum at the camp of Heber the Kenite, where Heber's wife, Jael, agreed to hide the captain of the Canaanite host, and then easily killed him with a tent peg (they were about 3 feet long) as he slept.

The messages of the story are clear:
1) When God has commanded us, it does not matter that the odds are stacked against us: our battle will be fought from heaven.
2) If we fear our challenges and lack faith that the Lord will magnify our abilities to meet them, we may lose opportunities for honor and success.
3) Sometimes the most unlikely people can do the most earth-shattering things. Neither Deborah nor Jael had any military training or responsibility, yet they secured the heroic victory.

A LATTER-DAY BATTLE FOUGHT "FROM HEAVEN"

For an interesting parallel in Latter-day Saint history, refer to the incident at Fishing River, in History of the Church Vol. 2, pp. 103-105.  As Zion's Camp arrived at Fishing River, just outside of Jackson County, Missouri, on June 19, 1834, a fierce storm arose.  Joseph Smith prophecied, "God is in this storm."  As they set up camp for the night, an angry mob of 200-300, fully equipped to attack them was gathering on the other side of Fishing River.  As the fury of the storm hit, "the earth trembled and quaked, the rain fell in torrents, and united, it seemed as if the mandate of vengeance had gone forth from the God of battles, to protect His servants from the destruction of their enemies, for the hail fell on them and not on us, and we suffered no harm, except the blowing down of some of our tents, and getting wet; while our enemies had holes made in their hats, and otherwise received damage, even the breaking of their rifle stocks, and the fleeing of their horses through fear and pain.

"Many of [our] little band sheltered in an old meetinghouse through this night, and in the morning the water in Big Fishing river was about forty feet deep, where, the previous evening, it was no more than to our ankles, and our enemies swore that the water rose thirty feet in thirty minutes in the Little Fishing river."  After enduring a fearsome night of injury and loss of property and witnessing one of their number being killed by lightning, the attacking party disbanded, declaring that "if that was the way God fought for the Mormons, they might as well go about their business."

(A slide show of photographs of the Fishing River area with a brief narrative can be viewed at JosephSmith.net.)

(The best information and analysis of the story of Samson that I can find is in the LDS Institute Old Testament Manual.)
Posted by Nancy Wyatt Jensen at 4:08 PM