Old Testament Lesson #30 "Come to the House of the Lord"

The story of King Hezekiah is found in three places in the Old Testament (beginning in 2 Chron. 29, 2 Kings 18, and Isaiah 36).  His name is mentioned 128 times.  Clearly his story is very important.

We have skipped ahead about 130 years and several kings from Jehoshaphat to find Hezekiah, another chain-breaking king who restored the true worship of Jehovah to Jerusalem.  King Hezekiah's father, Ahaz, had been very wicked.  He had defiled the temple and led the people in idolatry, even offering his own son as a heathen sacrifice (2 Chron. 28).  So how did he manage to produce such a righteous heir?  Hezekiah's mother's name was Abijah, and her father was Zechariah (2 Chron. 29:1).  Among the several Zechariahs mentioned, the one who fits in this time frame was the son of a priest (2 Chron. 24:20), and "had understanding in the visions of God" (2 Chron. 26:5).  Very likely, Hezekiah's mother was a faithful follower of Jehovah, and was the one who turned the tide for Israel, by raising her son to worship the true and living God.

OPENING THE DOORS OF THE TEMPLE

Hezekiah was only 25 years old when he began his reign.  Immediately, in the first month of the first year of his reign, he opened the doors of the House of the Lord.  He called together the priests and Levites and advised them to sanctify themselves first, so that they could then sanctify the House of the Lord.  They repaired and cleansed the temple.  Then they offered sacrifice and restored the musical worship set forth in 1 Chron. 25 (2 Chron 29).

Hezekiah invited the northern kingdom to come and freely worship at the temple also.  He decided to keep the Passover again the following month so that the northerners could participate, according to the rule stated in Numbers 9:10-11, this being acceptable for those who had to travel too far to get there in time.  The Levites put great effort into helping all of these travelers get ready, but Hezekiah realized that not all the details had worked out.  Maybe some were ignorant of what they were to do, or just didn't have time to get it done, so he asked the Lord to forgive them of these little technical infractions.  He held a Priesthood leadership meeting.  He extended the Passover to the second week, because no one wanted it to end.  The result of the quick restoration of the temple and the speedy return to proper worship was joy (2 Chron. 30).

All of those who had been at the temple returned to their lands and overthrew the idolatrous worship there.  Hezekiah issued a command that the people bring offerings (tithing), and the people responded with so much abundance that Hezekiah commanded that storerooms be prepared in the temple in which to hold this large supply of food for storage (see footnote to 2 Chron. 31:11).  "And thus did Hezekiah throughout all Judah, and wrought that which was good and right and truth before the Lord his God.  And in every work that he began in the service of the house of God, and in the law, and in the commandments, to seek his God, he did it with all his heart, and prospered" (2 Chron. 31:20-21).

The Jews were paying tribute to the Assyrians, and King Hezekiah decided to defy this tyranny and refuse to pay so that his people could be financially free.  This, of course, brought the wrath of the Assyrians upon them, and Sennacherib, the Assyrian king, commenced to invade Israel.  He advanced, bit by bit, through the land, conquering easily all the way.  He taunted the people, and blasphemed the Lord, trying to convince the people to abandon their belief and surrender to him.  As it became apparent that he would soon reach Jerusalem, Hezekiah made a very clever move, the result of which is still found at Jerusalem today, and that was the building of a tunnel.

The water for Jerusalem came from a spring near the city and Hezekiah had a tunnel dug into the walled city, through 1,749 feet of solid rock, creating an underground canal for this spring.  Then he covered over the water outside the city.  The Assyrians surrounding the city would have no water source, but the Jews inside the city would.  Remember also that they had a great store of food in the temple, as a result of their faithful tithe-paying.  In this manner, the Jews were prepared to be able to sit out a long siege.

Hezekiah's Tunnel is one of the great tourist attractions of Jerusalem. The original inscription was found in the tunnel in 1880 and is held in a museum in Istanbul, but a replica is still found on the tunnel.  (You can see photographs of the tunnel here.)

Hezekiah prepared for war and encouraged his people in a great speech, saying, "Be strong and courageous, be not afraid nor dismayed [regarding] the king of Assyria, nor for all the multitude that is with him: for there be more with us than with him.  With him is an arm of flesh; but with us is the Lord our God to help us and to fight our battles.  And the people rested themselves upon the words of Hezekiah king of Judah" (2 Chron. 32:7-8).

THE SIEGE OF JERUSALEM

The Assyrians did advance until they had surrounded the city of Jerusalem.  Inside the city, Hezekiah and his great prophet/advisor Isaiah prayed to the Lord in the temple (2 Kings 19:14-19; Isaiah 37:15-20).  The Lord answered the prayer through Isaiah, promising that He would defend the city, and that not only would the King of Assyria never step inside the city walls, he would not even be able to cast an arrow against it, but he would just go back home (2 Kings 19:20-34; Isaiah 37:21-35).  That very night, the angel of the Lord (death) slaughtered a vast number of the Assyrian army, and the remainder packed up and went home (2 Kings 19:35-36; 2 Chron. 32: 21; Isaiah 37:36).  (Could it have been something like the black plague or dyssentery that killed the Assyrians, caused by the lack of a source of clean water?)  20 years later (Harper-Collins Study Bible, p. 690), the Assyrian king was killed by his own sons (2 Kings 19:37).

There is beautiful symbolism in the story of Hezekiah's Tunnel:  The Jews could withstand the siege of Jerusalem quite comfortable because they had a conduit of life-giving water, something the Assyrians on the outside lacked.  We too have access to Living Water in our walled cities, our temples, which our Enemy cannot penetrate.  And although we can see the campfires of the Opposition surrounding us, yet we know that "there be more with us than with them...for with us is the Lord our God to help us, and to fight our battles." 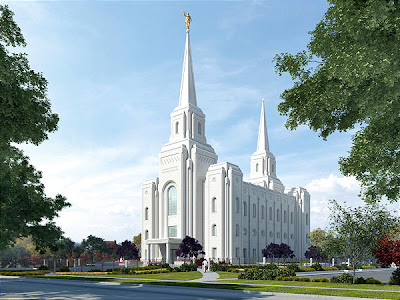 (An artist's depiction of the Brigham City Utah Temple, for which ground was broken this past week.  Click here for a news report on the ground-breaking.)
Posted by Nancy Wyatt Jensen at 11:52 AM

Thank you so much for your great site! Even though I've been an early morning Seminary teacher and currently teach Gospel Doctrine (20+ years experience), I have learned some great things reading your blogspot. Thanks!!

Do you know how long the temple had been out of use before Hezekiah restored it? From what I have read it was about the time of (or shortly after) Ahab and Jezebel which would make it about 100-150 years. Do you know if that is correct?

You know, I'm glad you asked that question, because it made me realize I had an error in the blog, which I will now fix. According to the Institute Manual, it was about 130 years from the death of Jehoshaphat (850 BC), who was the previous king to cleanse and repair the temple, until the reign of Hezekiah (720 BC). Here are two links to charts in that manual that give more detail:
http://institute.lds.org/content/images/manuals/ot-in-2/map-3ab.htm

Sister Jensen! So happy to have stumbled upon your blog while preparing for my lesson tomorrow here in NC. Love the insight you give into his mother. Thanks for sharing your talents and study! Desi Burbank

Hey, Desi! How very much fun to connect in this way!

Hi. I love your blog and am so grateful for the information you share. I did a study abroad semester in Israel and was able to walk through Hezekiah's Tunnel, which was a highlight. I just noticed a minor detail, but I thought I would throw it out there in regards to the sentence: "Hezekiah's Tunnel is one of the great tourist attractions of Jerusalem, and the original inscription is still found on it." It seems like I remember that inscription plaque being a replica. I believe the original was found there, but currently resides in Turkey somewhere. I could be wrong so feel free to check me on that. Thanks again for all you share.

Gadget, I don't know why I didn't notice your comment before, but in case you are still reading, you are absolutely correct and I appreciate the information. I have made the correction.