CHRIST PROCLAIMS HIMSELF THE ANOINTED ONE (Luke 4)

Christ announced the start of his ministry from the logical place, the place Jews might have expected their Messiah to appear:  the synagogue.  It was custom that a visitor in town was invited to read the scripture.  Christ, visiting his hometown of Nazareth, took this invitation.  Among the Jews, the speaker would stand to read the scripture, and then sit down to teach about it, which is what Jesus did here (Harper-Collins).

It should have been a glorious event, but it was rather disappointing.  They "all bare him witness and wondered at the gracious words which proceeded out of his mouth" (Luke 4:22), but then they remembered that they knew him, that he had been an ordinary boy raised in an ordinary family.

Christ perceived their thoughts and responded.  "You are expecting that if I'm the Savior," he said, "I'll suddenly appear magnificent in your eyes, and I'll do wonderful miracles here like I've done in other places (v. 23), but you have to accept me and have faith for that to happen" (v. 24).  He pointed out Old Testament miracles in which only the person who had great faith was the witness and beneficiary.

This infuriated his townspeople.  They were not willing to see their own lack of faith; they only saw a hometown boy who was bragging on himself, and then not delivering the goods. They wanted to hurl him off a cliff as a heretic!  But of course, he miraculously escaped.

(For more details on this event and scripture, see "The Mission of Jesus Christ" in a previous post.)

Too bad the people of Nazareth did not possess the great faith that a group of friends in another city exhibited shortly thereafter.  They brought a friend who was paralyzed (see footnote to Luke 5:18) on a stretcher to be healed by Jesus, yet apparently they could not get in the building or get his attention because of the crowd.  Rather than being offended that they were ignored or overlooked, and rather than being discouraged that their goal was unattainable, they just continued to exercise their faith (displayed here as determination) to find another way to get their desired miracle.  They climbed up on the roof, removed tiles, and lowered their handicapped friend through the opening. (This would have taken some serious faith on the part of the paralyzed man as well, to be so precariously transported!)

We might have chastised them for dismantling the roof instead of exercising patience, but look how the Lord responded:  "When he saw their faith, he said unto him, Man, thy sins are forgiven thee...Arise, and take up thy couch, and go into thine house" (Luke 5:20, 24).  One significant word here teaches us an important lesson about faith:  their.  "When he saw their faith," he healed him.  We can exercise faith effectively in behalf of others.  Collective faith is powerful.

Even though he was the Messiah, Christ did not spend much time working on his own.  The Kingdom of God is a cooperative effort, and those in it are blessed, not just by being served, but by serving.  As soon as his disciples were ready, Christ called them to be his Apostles.  The first four were called at the Sea of Galilee.

The Sea of Galilee, the Sea of Tiberias, the Lake of Gennesareth, and the Sea of Chinnereth are all the same sea.  "Its form is an irregular oval, with the large end to the north.  It is about 14 miles in length, and from 6 to 9 in width...Many populous cities once stood on its shores, such as Tiberias, Bethsaida, Capernaum, Chorazin, Hippo, etc...It is, however, stormy, owing probably to the high hills by which it is surrounded" (Barnes, p. 38).

Readers who are familiar with Bear Lake, on the Utah-Idaho border, might be interested in the following comment written by my stake president, Kent Wallis who, with his artist's eye, notes: 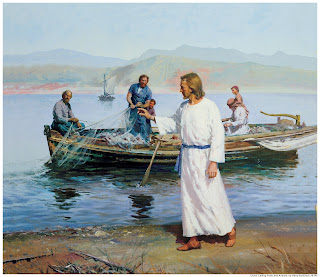 Sea of Galilee (above), Bear Lake (below) 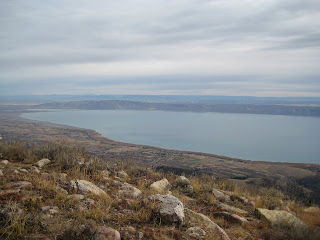 "And it came to pass, that, as the people pressed upon him to hear the word of God, he stood by the lake of Gennesaret, and saw two ships standing by the lake: but the fishermen were gone out of them, and were washing their nets" (Luke 5:1-2).

These fishing vessels were manned by brothers Simon Peter and Andrew, and their partners James and John, who had previously been invited to become disciples of Christ, and who had been spending time with and learning from him for possibly a year (Hendrickson, p. 248), while continuing their livelihood as fishermen.  (See "The Calling of the Apostles" in a previous entry.)  The fish were not biting that morning, and the men had given up.  Since their day's work was cancelled, their ships were on the shore in the perfect position to serve Christ's purpose.  Jesus was not a stranger to them, and so he asked Simon to push out from the shore and allow him to teach the crowd from the ship (v. 3).

There is a small bay on the Sea of Galilee, now called "The Bay of the Parables", at the foot of what is now called "The Mount of Beatitudes."  "The slope of the hill forms a natural amphitheatre, rather like a Roman theatre. Acoustical research has demonstrated that as many as 7,000 people could hear a person speaking from a boat in the bay."  It is a popular attraction for present-day visitors to the Holy Land. (SeeTheHolyLand.net)  Jesus knew the acoustics of this place--after all, he created it!--and used it for amplification long before microphones and speakers were invented.

After Jesus preached his sermon (which is not recorded), "He said unto Simon, Launch out into the deep, and let down your nets for a [haul]" (v. 5).  Simon Peter answered, "Master, we have toiled all the night, and have taken nothing: nevertheless at thy word I will let down the net."  Here is another example of faith which we can follow.  We may have reason to argue with the Lord's commands, but in the end we need to follow Simon's example and say, "nevertheless at thy word I will do it."  Simon and his brother Andrew (mentioned by name in Matthew's and Mark's accounts) cast their nets and took in so much fish they had to call their partners to bring the second ship, and both boats were so weighed down, they nearly sank (v. 6-7).

Even though they knew the Savior and his works already, it was a shock to them.  Simon Peter felt immediately unworthy for this obvious miracle in his behalf (v. 8).  (Compare this attitude to that of the townspeople of Nazareth.)  He had offered a small service to the Lord in allowing the use of his ship as a podium, and in return he had been given a financial windfall.

The four fishing partners were then called to the full-time ministry by Christ (v. 10).  The remaining eight apostles were soon called, and are listed in Matt. 10:2-4.  (Note Levi and Matthew are considered to be the same person.)  But in the telling of this call to the first four apostles, we see a great example:  Peter, Andrew, James and John, having just seen the largest profit of their careers, straightway "forsook all, and followed him" (Luke 5:11; Matt. 4:20; Mark 1:18).  These men passed the test of prosperity straight through to the Law of Consecration.  Can we do that?

A PARABLE FOR US

In Christ's call and instruction to the twelve apostles in Matt. 10, we find these familiar phrases:  "Freely ye have received, freely give" (v. 8), and "He who seeketh to save his life shall lose it: and he that loseth his life for my sake shall find it" (v. 39 JST).  These commands apply to our own service in the Kingdom as well.

We are not often in jeopardy of dying for the gospel cause, but this scripture applies to the way we live for the gospel cause as well.  We sometimes seek to "save" our lives by hoarding our time and talents and everything with which we have been blessed, or by holding back just a little corner of them from the Lord.  Anytime we do so, we are abandoning the Law of Consecration.

We don't have to be called as Apostles to be expected to give our all.  At the time of President Hinckley's call as the prophet, he said:

"Now, my brethren and sisters...I wish to leave with you one thought which I hope you will never forget.  This church does not belong to its President. Its head is the Lord Jesus Christ, whose name each of us has taken upon ourselves. We are all in this great endeavor together. We are here to assist our Father in His work and His glory, “to bring to pass the immortality and eternal life of man” (Moses 1:39). Your obligation is as serious in your sphere of responsibility as is my obligation in my sphere. No calling in this church is small or of little consequence. All of us in the pursuit of our duty touch the lives of others. To each of us in our respective responsibilities the Lord has said:

"'Wherefore, be faithful; stand in the office which I have appointed unto you; succor the weak, lift up the hands which hang down, and strengthen the feeble knees' (D&C 81:5).

"'And in doing these things thou wilt do the greatest good unto thy fellow beings, and wilt promote the glory of him who is your Lord' (D&C 81:4).

"Further, 'And if thou art faithful unto the end thou shalt have a crown of immortality, and eternal life in the mansions which I have prepared in the house of my Father' (D&C 81:6).

"All of us in this great cause are of one mind, of one belief, of one faith.  You have as great an opportunity for satisfaction in the performance of your duty as I do in mine. The progress of this work will be determined by our joint efforts. Whatever your calling, it is as fraught with the same kind of opportunity to accomplish good as is mine. What is really important is that this is the work of the Master. Our work is to go about doing good as did He...
"Unitedly, working hand in hand, we shall move forward as servants of the living God, doing the work of His Beloved Son, our Master, whom we serve and whose name we seek to glorify."
SOURCES:

Again, a delightful supplement that makes my lessons even better. Thank you for your service. It is greatly appreciated. The bread thing, however, will be a bit difficult to pull off on Fast Day!

You are truly walking the talk and living the example President Hinckley urged us to do.
Ron

I am so excited I found your blog. I have never taught SS before and am now teaching the teenagers. I feel very inadequate to teach and your blog has helped me tremendously. Thank you so very much! You will be blessed for all your efforts. Barbara

Thanks again for posting your lessons. They help me teach the lesson material while adding the little extra that helps keep everyone interested.

Wow!! loved the parable! Can't wait to share it w my SS class! Thanks for sharing!!