New Testament Lesson #12 "I Am the Bread of Life"

As Jesus Christ was going about doing good, healing the sick, feeding the hungry, cleansing the lepers, casting out the devils, and teaching eternal truths, the Jews repeatedly sought his death.  What was up with that?  Why would they want to kill someone who did only wonderful benevolent things?  The odd answer is because of their religion.  They considered it religious high treason that he would proclaim himself the Son of God, "making himself equal with God" (John 5:18).

Admittedly, it would be rather difficult to believe that a man who was standing before you, living, breathing, and looking in every way human, could be the Son of God.  But Jesus pointed out to them many times, and particularly explicitly in this reading assignment, that there were more than enough credible witnesses to his divine Sonship to prove it, especially for a people who professed to believe so strongly in the scriptures.  He itemized four completely trustworthy witnesses.

"If I bear witness of myself, my witness is not true.

(1) "[But] there is another that beareth witness of me; and I know that the witness which he witnesseth of me is true.  Ye sent unto John, and he bare witness unto the truth.  And he received not his testimony of man, but of God, and ye yourselves say that he is a prophet, therefore ye ought to receive his testimony.  These things I say that ye might be saved.  He was a burning and a shining light: and ye were willing for a season to rejoice in his light.

(3) "And the Father himself, which hath sent me, hath borne witness of me...

The scriptures were of utmost importance to the scribes and pharisees, and they thought that the Law of Moses, contained in the scriptures, would be the source of their salvation.  The law was merely there to bring them to Christ, and yet they would not come.  Therefore, their trust that eternal life was found in the scriptures was misplaced because they did not use the scriptures to find the Savior.

"Do not think that I will accuse you to the Father: there is one that accuseth you, even Moses, in whom ye trust.  For had ye believed Moses, ye would have believed me: for he wrote of me.  But if ye believe not his writings, how shall ye believe my words?"

When I was expecting my fourth child, I had three very small boys ages 1, 3 and 5.  I was morning sick, and was recovering from a strep infection when I received the glorious and unexpected blessing of having my very active 1-year-old fall sound asleep for a nap.  My older two children were fairly calm and obedient and the idea of a nap for myself was so divine that I dared to ask them if they would go downstairs and play together quietly while I got a little rest.  They asked, "Can we paint?"  In our basement we had an old dining room table for the boys to use for their artistic endeavors, we had paper and watercolor paints and we had art smocks, so I said, "Sure, as long as you don't get any paint on the carpet or on your clothes."  I went into my bedroom and fell into a deep and blessed sleep.

When I woke up, I glanced at the clock and nearly had a heart attack:  I had slept for two hours!What was even more alarming was that I couldn't hear anything from the basement: always a bad sign when small children are involved.

I dashed down the stairs, and this is what I found: 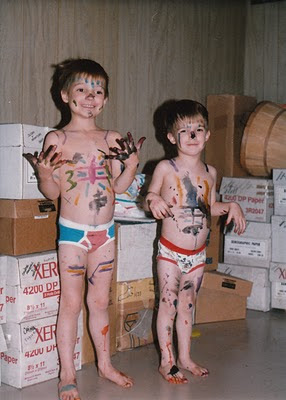 The boys had gone into the storage room, which had no carpet, removed all their clothes but their underwear, and painted each other to their hearts' content!  They had kept the rules, but missed the point.

The Jews were very like my two boys (only not nearly as cute):  they focused on every detail of the law while entirely misunderstanding the gospel.

An example of this huge oversight can be found at the pool of Bethesda where lay "a great multitude of impotent folk, of blind, halt, withered, waiting for the moving of the water" (John 5:3).  Bruce R. McConkie wrote, "No doubt these waters had--as hot mineral springs do in our day--some curative and healing powers, which gave rise to a legend, among the superstitious and spiritually illiterate Jews, that 'an angel went down at a certain season into the pool, and troubled the water,' and that 'whosoever then first after the troubling of the water stepped in was made whole of whatsoever disease he had'" (The Mortal Messiah, Book 2, p. 66).

In a previous lesson, we read of the paralyzed man whose friends let him down through the roof so that Jesus could heal him.  Because of their faith, Jesus said, the miracle was performed for him (Mark 2:1-5).  They were living pure, faith-filled religion.  But no one would help the palsied man who lay at the pool of Bethesda.  Instead, others rushed down greedily, to soak up the waters for themselves (John 5:6-7).  Of course, Jesus was always concerned for the one.  And it did not matter whether the pool was there or not.  Jesus said to him simply, "Rise, take up thy bed, and walk.  And immediately the man was made whole, and took up his bed, and walked: and on the same day was the sabbath" (John 5:8-9).

Not only were the people not helping this suffering man, but when they later saw him carrying his bed and walking, they didn't rejoice with him, but they chastised him for breaking the sabbath.  He told them of the command of the Savior to rise up and carry his bed, another one of those many, many works that clearly testified that Jesus was the Son of God, but the Jews saw it only as a breaking of the law.  They didn't understand that the law without the gospel contained in it was a fruitless false religion.  As James later wrote, "Pure religion and undefiled before God and the Father is" not just to remain personally holy, but to love and serve others (James 1:27), and Jesus taught that "All the law and the prophets" could be encapsulated in the simple commandment to love (Matt. 22:37-40).  Over and over, Jesus was showing them how to live real religion, but only a few got the message.

Question:  Are we too busy living our religion to live the gospel?

"When we truly understand what it means to love as Jesus Christ loves us, the confusion clears and our priorities align.  Our walk as disciples of Christ becomes more joyful.  Our lives take on new meaning.  Our relationship with our Heavenly Father becomes more profound.  Obedience becomes a joy rather than a burden" (Pres. Dieter F. Uchtdorf, "The Love of God," Ensign, Nov. 2009, p. 21).

"All of the cute handouts, well-orchestrated meetings and finely decorated events can never compensate for true love of the people we serve.  A person will be able to read past this 'fluff' and see if your actions and intentions truly show that you have love and concern for them, or if you are simply trying to mark your box as 'done.' Instead of spending money and time on elaborate programs and materials, why not spend the time attending an event of that person's, dropping by during a Sunday walk to say 'Hi,' or offering your time to help them?  We have recently been the beneficiary of many of these acts of kindness and can testify that this is how we truly know members around us sincerely care; even those who are not 'assigned' to us."  (James & Andrea Nye, Logan Utah East Stake Star, March 2011, Vol. 32, Issue 1.)

The gospel of Jesus Christ is not the "icing on the cake," but the "bread of life."

THE BREAD OF LIFE

I found two wonderful articles on the Bread of Life, and I am providing links to them, rather than picking out quotes or paraphrasing, because they are just too good to slice up.  The first relates the events of John 6 to the Exodus.  The second tells how the spiritual hunger of today can be alleviated by coming to Christ, the Bread of Life.

(Note:  If you have the time and means and a smallish class, you may want to make mini loaves of bread using frozen Rhodes Texas Roll Dough.  Thaw and roll into 4-inch loaves and place them either in 2 x 4 inch mini loaf pans, or an inch apart from each other in a rectangular pan.  Follow the instructions for rising and baking printed on the package.  Or use your own homemade bread or roll dough.  Put each loaf in a small plastic bag, and tie it with a tag that has John 6:35 printed on it.)
Posted by Nancy Wyatt Jensen at 1:21 PM

Quick question -- who are James and Andrea Nye?

They are just members of my stake who were asked for their input in the stake newsletter, and I thought it was very insightful and well-put. Andrea was recently released as a ward Young Women's President and called as Stake Girls' Camp Director, if I remember right.

Yes - I think it is very insightful. Thank you for sharing your thoughts on these lessons. It certainly helps me prepare my lessons.