"Miracles:  An important element in the work of Jesus Christ, being not only divine acts, but forming also a part of the divine teaching."  (Bible Dictionary, p. 732)

Of all of the miracles that Christ performed during his earthly ministry among the Jews, the healing of the man blind from birth is the only one that takes up an entire chapter.  There must be a lot we can learn from this singular story and apply to our own lives.

(You may want to ask the class to identify all the lessons they can find in this story.  They may come up with better stuff than I have.)

THE HEALING OF THE BLIND MAN 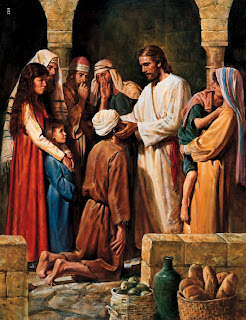 "And as Jesus passed by, he saw a man which was blind from his birth.  And his disciples asked him, saying, Master, who did sin, this man, or his parents, that he was born blind?" (9:1-2)

Hmm.  Didn't we already get this question answered in the Book of Job?  Maybe these Jews had not read it...

"Jesus answered, neither hath this man sinned, nor his parents: but that the works of God should be made manifest in him."  (9:3)

Lesson #1:  Birth defects or illnesses are not necessarily anyone's fault.
Lesson #2:  Physical weakness does not automatically indicate spiritual weakness.
Lesson #3:  Without problems, there would be no need for miracles, the manifestation of God's power.

Jesus again proclaimed himself the Light of the World, sent to do the works of his Father, and then he made a little clay with his spit, and put it on the eyes of the blind man, "an act that was a well-known Jewish remedy for diseases of the eye" (McConkie, p. 29).  He then instructed him to go and wash in the pool of Siloam.  This pool is familiar to us:  the same place where the impotent man was trying to get in the water to be cleansed, it is at the end of Hezekiah's Tunnel.  Without any question, the blind man "went his way therefore, and washed, and came seeing." (9:7)

Lesson #4:  Miracles can come from the most unlikely raw materials.
Lesson #5:  Sometimes we are expected to work for our miracles.  "Faith is a principle of action and of power" (Bible Dictionary, p. 670)  Although this man did not know who Christ was, his infant faith is shown in the fact that he immediately obeyed.

The neighbors were understandably astonished.  Some thought it must be another person who simply looked like the blind man.  But he identified himself and they asked him how he was healed.  He said he was healed by "a man named Jesus," and told them how it was done.

The neighbors took him to report to the church leaders.  Wouldn't you?  Wouldn't everybody be delighted to hear about this miracle?  Joseph Smith did the same thing after seeing his great vision, and he got about the same flavor of response as this blind man did:  Indignation.  In this case, they criticized Jesus for "working" on the Sabbath.

There were 39 kinds of work forbidden on the Sabbath.  By building something of clay, and by kneading the clay, the Pharisees claimed Jesus broke Sabbath rules (Stern, p. 184).  Applying a healing remedy was also against the Sabbath, "and in addition there was a specific prohibition against the application of saliva to the eyes on the Sabbath," it being a well-known treatment (McConkie, p. 201).

The Pharisees falsely accused him in every case of Sabbath healing.  He defended his Sabbath healings perfectly in John 7:2.  According to the Rabbinic discussions recorded in the Talmud, tractate Shabbat, pgs. 128b-137b, which says that it is more important to circumsize a child on the correct day, the 8th day, even if it is the Sabbath day, than it is to keep the Sabbath rules of not carrying tools or doing cutting.  Jesus used what in Judaism is called a "light and heavy" argument:  If you can break the Sabbath to observe circumcision, how much more important it is to heal a person's whole body on the Sabbath (Stern, p. 177).

When the rulers of the synagogue asked the formerly blind man who healed him, his answer reflected his growing testimony.  Where he told the neighbors it was simply a man named Jesus, he now said, "He is a prophet" (9:17).

The leaders called the parents of the man as witnesses.  They wanted proof that the man had really been blind from birth.  The parents said that he had been, but denied knowing how he had been healed, "For the Jews [meaning the church leaders] had agreed already, that if any man did confess that he was Christ, he should be put out of the synagogue" (9:22).  "The blind man's parents betray him to a fate they fear themselves" (Harper-Collins Study Bible, p. 2032).

"Judaism has three degrees of excommunication, though none is common today...The most severe, cherem, was a ban of indefinite duration; and a person under cherem was treated like one dead.  For a family so poor as to allow their son to beg--begging charity was to be avoided as much as giving charity was to be practiced--being de-synagogued would have been a dreadful disaster.  For Messianic Jews today social ostracism by family and/or the Jewish community--that is, being treated as if under a cherem--can be a cost to be counted when committing one's life to Yeshua [Christ].  (Stern, p. 184.  An especially poignant comment, considering the author is himself a Messianic Jew.)  (You can also find this information in McConkie, p. 204-205.)

The healed man, however, knew where his allegiance lay.  They called him again and accused his healer of being a sinner.  (Note:  The phrase "Give God the praise" in v. 24 indicates a request for a solemn judicial statement, the ancient equivalent of "Swear to God you're telling the truth." [Stern, p. 184])  The man refused to place a judgment on Christ, but swore that he had healed him.  The leaders pressed him again and reviled him for telling the truth, and claimed they did not know where Christ came from (or got his authority).  I love the healed man's retort:

"Why herein is a marvellous thing, that ye know not from whence he is, and yet he hath opened mine eyes.  Now we know that God heareth not sinners: but if any man be a worshipper of God, and doeth his will, him he heareth.  Since the world began was it not heard that any man opened the eyes of one that was born blind except he be of God.

Lesson #7:  True miracles are worked only by followers of God.
Lesson #8:  People who don't want to see miracles won't; evidence will make no difference.
Lesson #9:  Testimonies grow in the bearing or defending of them.

At this, the authorities called him "born in sins," the equivalent of saying he had been born an illegitimate child (I decided I didn't want to put the actual word here--it's not a nice one), and cast him out (9:34).

Jesus, hearing about it, sought him out and asked if he believed on the Son of God.  Again, a wonderful response from the healed man:  "Who is he, Lord, that I might believe on him?"  Jesus identified himself, and the man immediately said, "Lord, I believe.  And he worshipped him." (9:35-38).

Lesson #10:  Just because someone else calls you a bad name and ostracizes you, it doesn't lessen you in the eyes of Christ.
Lesson #11:  Jesus is always mindful of his believers and their trials and comes to their aid.
Lesson #12:  Christ will reveal who he is to those who want to believe.

Lesson #13:  Jesus will reveal himself to those who "see not" but desire to see, but not to those who are convinced they already see perfectly well without him. 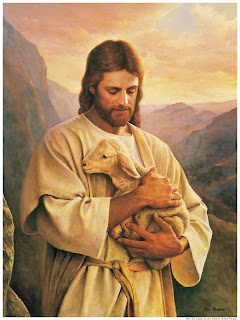 "No figures of speech, no similitudes, no parables or allegories brought greater joy to Israelite hearts than those which led to the glorious pronouncement:  Jehovah is our Shepherd.

"Israel's very lives depended upon the safety and procreant powers of their sheep.  Physically and spiritually their interests centered in their flocks and herds.  From them came food for their tables, clothes for their bodies, sacrifices for their altars...Those who cared for the flocks were not sheepherders but shepherds; sheep were not driven, but led; they hearkened to him whose voice they came to know.  At night the flocks were commingled in one safe sheepfold where a single shepherd stood guard against the wolves and terrors of the night.  In the morning each shepherd called his own sheep out and they followed him to green pastures and still waters" (McConkie, p. 210).

I love The Harper-Collins Study Bible, because the commentators in it are honest.  If they don't understand something, if they don't have certain proof, they say so.  In this case, they say, in reference to 10:16:  "The other sheep are probably the Gentiles."  "Probably."  They're not sure.  We, of course, having the additional resource of the Book of Mormon, know these other sheep are the inhabitants of ancient America.  (See 3 Nephi 15:15-22.)


(See also a previous lesson, "The Shepherds of Israel".  Also check out this excellent article on sheep, shepherds, and Christ:  Homer S. Ellsworth, "Thoughts on the Good Shepherd", Ensign, Dec. 1985.)

You do a great job of drawing out all the principles from the story of the healing of the blind man. Thanks for this.

I love reading your thoughts. Thank you so much for sharing.

I just found your site and I love it!!! thanks for taking the time to enlighten us and help us to have the scriptures come alive and grow closer to Christ!

Question- when you refer to "McConkie", do you mean his book "The Mortal Messiah"? (I have it on CD so I cannot readily go to page 26). Thanks again!

Doh! Oh I can be such a goof! I see now that you already supplied the source for you McConkie info. Sorry about that. :(

Once again I am enjoying reading your insights. Wish I could get everyone in my class to read them:)

I so appreciate your thoughtful study and your willingness to share your learnings. Thank you!

Thank you for sharing, your insight and draw from previous lessons is inspiring.

Thank you very much for you hard work. Imhave being reading and using may parts of your blog for my lessons here in Switzerland.

Jesus leaves an interesting comment on his sheep in 3. Nephi 16:1-3. Maybe those sheep were included in his comment in John. Who could they be?

With gratitude, allow me to express my aloha to you and to your family as well. I am blessed because you shared and inspired because you put words into my thoughts and feeling about the doctrine of Christ and my love for the Savior. Akua bless you! Harrah for Israel!