2 Nephi 26-30 with The Celestial Pyramid Game

Here's a little game to use as a springboard for discussion.
Remember: there is no rule against having fun in scripture study!

This pyramid game won't earn anyone $10,000 but it has more important categories!  To prepare the game, make 10 numbered boxes out of paper.  On the back of each box list the category.  One member of the family or the teacher of the class reads the items in the category, and the other members guess the category.  (The entire group is on the same team.)  The reader can give clues to the page number or verse number in the scriptures if needed.  When the group guesses the category of Box #1, the reader turns the box over to reveal its category.  Commentary and discussion of the topic can take place, then the group moves on to guessing Box #2, and so on until they reach Box #9.  They then must look at all the categories and decide what the category of the entire "Celestial Pyramid" is, upon which Box #10 will be turned over and they will have won the game. 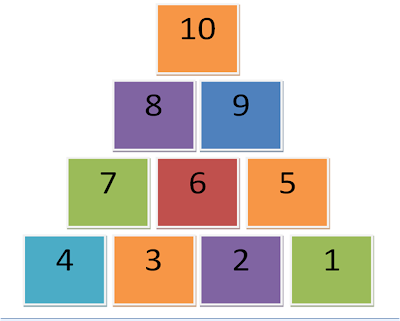 Check out reader Aaron's fun "bonus round" in the comments below.  Thanks, Aaron!
Posted by Nancy Wyatt Jensen at 2:45 PM

Thank you! What a fabulous teacher you are!!

Wonderful idea! I appreciate all your posts they are so insightful and have helped my testimony of the Book of Mormon increase. You're awesome!

I'm confident that if everybody you've helped left a comment, it would crash the Blogger servers. I've been using a lot of your insights (and giving credit) since I was called as a GD teacher last year. I've been struggling with this week's lesson (so many good topics, but nothing is grabbing me), so I think we're going to play the Pyramid. Thanks again for all the hard work you do to help us all out.

I just wanted to thank you so much for your blog! I recently found it and it is helping me so much in preparing my lessons. I was struggling with this week's lesson as well and I think the Celestial Pyramid game will be wonderful. Thanks again for all your hard work.

My class is going to love this activity!

Thank you! This looks so fun! We are going to give to a go today in my class. I always love your insight and dedication. Thank you again.

I always come to your blog after reading my lesson for the week. The class I teach is 15 turning 16 and you always have something that grabs my attention so I know it will grab theirs! You have a gift for teaching.

Thank you Nancy, I appreciate all your hard work, as do my 14 and 15 year old students!

Another FANTASTIC lesson. I wanted to add on a little part about the coming forth about the Book of Mormon - and I did it in true Pyramid style. If you'll remember, one of the pyramids in the bonus round (usually 2nd pyramid) was always "What _____ would say." So, I've made up some quotes from my studies of Joseph Smith - History 1:61-65:

BOX #8: THINGS THAT PROFESSOR CHARLES ANTHON MIGHT SAY (2 Ne. 27:15-20; p. 105)
• “Hmmmm, those characters sure are interesting.”
• “Yeah, that’s a pretty good translation - probably the best I’ve ever seen.”
• “Here’s a certificate to show that those characters are indeed genuine.”
• “But, since I’m the one who actually teaches at Columbia University, it’s probably best if I take a look at the rest of the book so I can translate it.”
• “So, these came from some “golden plates” . . . and how did the young man find these plates?”
• “Can I see that certificate I just gave you for a quick second?” <>
• “I cannot read a sealed book.”

The advantage of the internet is that this great blog is still serving us teachers for another round of the Book of Mormon! This pyramid game will be great in SS this week on the heels of the Provo City Center Temple Dedication. And I teach the adults! Thanks for all the great lessons over the past few years; they have helped me immensely!