PREPARING THE SOIL FOR THE RESTORATION

Among the many varieties of bamboo grown in China is the beautiful black bamboo.  Black bamboo will spread very quickly from a grown plant, but to grow and harvest black bamboo from seed is another matter.  The seed comes in a very, very hard shell, which a hobby gardener can crack and then follow the very tricky and exacting process to germinate it, but a farmer who wants to harvest acres of bamboo must be patient.  He must carefully plant the bamboo seeds at the correct distance, and then nurture them carefully and patiently for a long time.

Quoting from the travelogue of a motivational speaker who witnessed the farming of black bamboo:

"Extending as far as the eye could see was an empty field of rich, black, tilled earth.  Not a single bamboo plant was in sight, not even a tree.  Peter [our guide] explained to us that the field had been sown a few weeks prior.  Each of over a thousand farmers carried a heavy satchel of seeds, water and fertilizer on their backs.  He explained the great care need necessary at this step in the process...

"Once placed in the ground, each seed is individually fertilized with a deep drink of water and a handful of fertilizer from the farmer’s heavy satchel.  The process of watering and fertilizing is ritually carried out weekly on a seed by seed basis for nearly five years.  No heavy machines, no modern irrigation equipment--just individual farmers carefully tending the individual needs of each seedling in the field.

"About a mile down the dusty road was a field that Peter told us had been sown two years prior.  When we reached our destination we were surprised to see what looked to us like thousands of farmers working in an empty field. 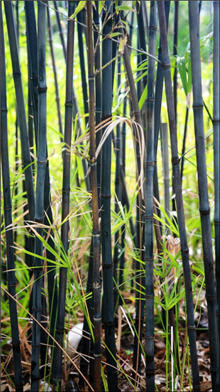 "Behold, the days come, saith the Lord God, that I will send a famine in the land, not a famine of bread, nor a thirst for water, but of hearing the words of the Lord:  And they shall wander from sea to sea, and from the north even to the east, they shall run to and fro to seek the word of the Lord, and shall not find it."  (Amos 8:11-12)

For nearly 2,000 years this famine persisted.  The true church was missing from the earth.  During this time period, however, hundreds of years before the gospel was restored, the Lord planted seeds and began to water and feed them.  Long before Joseph Smith was born, world events helped to prepare the soil for the sprouting of the Restoration.

What were some of these preparations?  (Answers could include the Renaissance, the invention of the printing press, the translation of the Bible into everyday language, the Reformers, the discovery and colonization of America, the Constitution of the United States, and the preparation of individuals such as the Smith family.)

THE PREPARATION OF THE SMITH FAMILY

Generations before Joseph Smith was born, the Lord began to prepare the Smith family to nourish the prophet of the Restoration.  Joseph Smith's grandfather, before Joseph was even born, said, "It has been borne in upon my soul that one of my descendants will promulgate a work to revolutionize the world of religious faith" (Joseph Fielding Smith, Essentials in Church History, 27th ed., p. 25).

Joseph Smith's father and grandfather were not Calvinists, as were most people of the time in America, whose basic tenets include believing in original sin, the unconditional election of a few, and a limited atonement, under the rule of a harsh God.  The Smith men believed in the much more liberal and kindly Universalist doctrine, in which God is viewed as a loving being who will save all of mankind,.  The founder of Universalism in America, John Murray, preached for many years just 15 miles from where Joseph's grandfather, Asael Smith, lived.  Asael Smith warned his children not to think themselves more loved by God than "the heathen in the darkest corner of the deserts of Arabia, because God was no respecter of persons." Interestingly, Martin Harris, the Joseph Knight family, and the Hezekiah Peck family were all Universalist in their beliefs as well, prior to the organization of the Church. (See Casey Paul Griffiths, “Universalism and the Revelations of Joseph Smith,” The Doctrine & Covenants: Revelations in Context, Proceeds of the 37th Annual BYU Sidney B. Sperry Symposium.)
Lucy Smith, Joseph's mother, also well before he was born, prayed to the Lord that her husband would become more religiously inclined. Indeed he did, but he could only conclude that Jesus Christ's true church did not exist on the earth. During his search, he received a vision of the Tree of Life, just like Father Lehi's in The Book of Mormon, but in his dream he wandered through surroundings that matched his New England home and not an Arabian desert (Lucy Mack Smith, Revised and Enhanced History of Joseph Smith by his Mother, p. 64-66).  Lucy also witnessed several personal visions. This family expected God to speak, to answer questions, to reveal His will. The Smith family had been nurtured, transplanted, and humbled for decades by the Lord, so that when Joseph Smith received the First Vision, the growth of the Kingdom of God on the earth was rapid and sure, like the sprouting of black bamboo.
ACCOUNTS OF JOSEPH SMITH'S FIRST VISION
Joseph Smith's life was not one of quiet contemplation and serenity in which he could leisurely write in his journal or keep careful records of all that happened to bring the Church of Jesus Christ back into the world. In fact, simply obtaining paper was an expense not always easy to manage. Hence, histories were started and then stopped when problems arose, then restarted in another fashion. As he wrote shortly before his death,
"Since I have been engaged in laying the foundation of the Church of Jesus Christ of Latter Day Saints I have been prevented in various ways from continuing my Journal and the History, in a manner satisfactory to myself, or in justice to the cause. Long imprisonments, vexatious and long-continued lawsuits, the treachery of some of my clerks, the death of others, and the poverty of myself and brethren from continued plunder and driving [from place to place by mobs] have prevented my handing down to posterity a connected memorandum of events desirable to all lovers of truth" (Joseph Smith, Jr., History of the Church, 4:470).
Among these stops and starts, there are eight accounts of the First Vision. Three of them are copies of others, which means there are five different accounts of the First Vision in Joseph Smith's own words.
1832 Journal Entry 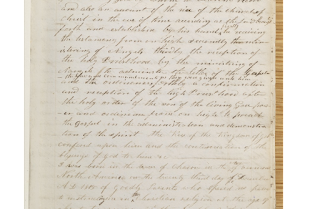 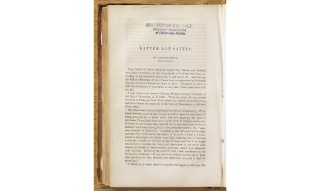 A photograph of a page of the history book by Rupp
from JosephSmithPapers.org
You can read all of these accounts at https://www.josephsmithpapers.org/site/accounts-of-the-first-vision or in the book, Opening the Heavens: Accounts of Divine Manifestations, 1820-1844, John W. Welch, ed. (Brigham Young University Press: Provo, Utah and Deseret Book: Salt Lake City, Utah, 2005) 3-19.
YOUR PERSONAL PREPARATION FOR THE GOSPEL
The hand of the Lord can be found in any convert's life--preparing him to receive the gospel--and it can be found in the conversion of lifetime members, too, leading them from grace to grace. One thing I love about reading the various versions of Joseph Smith's vision are that the place that we call "The Sacred Grove," he calls "the silent grove" and "the secret grove."
THE PREPARATION OF OUR FAMILY AND ASSOCIATES

Although the Restoration has already taken place in the world, there are still many people who are being prepared for the Restoration to take place in their hearts.  Some will be easily reached, but others will be like black bamboo, covered in a nearly impenetrable hard shell.  We can help to nurture those seeds through our example, teaching, family relations, friendships, prayers, and missionary work.  Suddenly one day, the shell will crack, there will be a broken heart and a contrite spirit, and the seed will sprout and begin to grow.  The important thing is that we have the faith and the patient love to continue to water and nurture, despite the fact that there is no outward evidence that the seed will ever sprout.
Thank the Lord for the Restoration!
BONUS: FOR THOSE OF YOU WHO LOVE DEEP-DIVES INTO DOCTRINE
This is a jaw-dropping treatise on the First Vision as a prelude to the Endowment and as a pattern of the entire Gospel, presented at the 2019 FAIR Mormon Conference by historian Don Bradley. Don had left the Church but then returned when he studied the First Vision in order to prove that it was a fake. I highly recommend it! You can read the transcript  or listen to the audio or find FAIRMormon on your own podcast app and play Episode 40, "Joseph Smith's First Vision as Endowment and Epitome of the Gospel (or Why I Came Back to the Church)."
BONUS: FOR THOSE OF YOU WHO LOVE VIDEOS
To learn about another great prophet who was prepared by the Lord for the Restoration watch "A Search For Truth,"  the story of Wilford Woodruff's conversion. It is definitely worth your time.

Posted by Nancy Wyatt Jensen at 9:43 AM

Hi Nancy, my name is Ramona. I really love this post. I am a fairly new member/convert for the past 5 years of the Church of Jesus Christ of Latter Day Saints. I love it, and on the day I was Baptized, I knew it was the best day of my life, the only other days that compared was my own endowment and then Sealing to my husband.
I can testify that Heavenly Father does prepare us, literally from the foundation of the earth for our lives here, but also in how our life's journey evolves. In the space of about 15 years, in my own life, I saw myself pray for the Lord's help in my life in the form of a husband, a car that ran, a job with the weekends off and the bonus prize, a home of my very own. When my husband and I moved into the home, we didn't realize then that it was in walking distance of an LDS chapel, until the missionary's came a knocking.

I later found out that my husband was a member, but he was inactive and he was making his way back to church. It took a year and a half of investigating every aspect of this church for me to make a decision,and what sealed the deal for me, was that I believed that Joseph Smith was a true prophet of God, and that God and the Savior did indeed live and loved me. The journey is still evolving, and I am so grateful for the "clearing" of my path so that I could be here at this wonderful time in history.

Hey Nancy, love your material and appreciate your work here. Whahoppen to Lessons 1 & 2?

They were posted in December. Just look back a bit.

Thanks for sharing useful stuff, it quiet valuable for me.

�� thank you so much for taking the time to prepare and post these, truly a treasure of a resource

Really appreciate the insight. Helps me to understand in different ways and different perspective. Please keep this up