Doctrine and Covenants Lesson #26 "Go Ye into All the World"


Before class begins, hand out placards with Parley P. Pratt, Officer Peabody, Judge, and Ziba Petersen printed on them to four class members who would be willing to act in a skit.  Also give them copies of the script to quickly read through.

Kirtland Timeline Game
Make large cards with the years of the Kirtland Era (below) on them, and print up separately the major events that took place in Kirtland.  Distribute all to class members.  Have those with the year cards come up front.  Have those with events read the events (in any order) and have the class try to match up the right events to each year.  Put them all on the board after they are correctly matched. 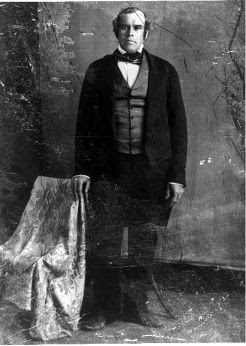 (Parley and Brother Petersen stand as if preaching to the audience, Parley holding a Book of Mormon.)

Parley:  (to class) While doing missionary work 50 miles from Kirtland, my companions and I stopped for the night at the house of Simeon Carter.  While we were reading and explaining the Book of Mormon to him, there came a knock at the door.

Officer Peabody: (Knocks at the door loudly, then enters the classroom)  Mr. Pratt!  Here is a warrant for your arrest.  You must come with me.

Parley: (to class) I dropped the Book of Mormon at Carter’s house, and went with him some two miles, in a dark, muddy road until we arrived at the place of trial late at night.  Brother Petersen accompanied me.

Judge:  Mr. Pratt!  I intend to throw you in jail.  I want to see if you really have the powers of apostleship as you claim!  I have witnesses here who will help me to prove you guilty of a crime and there’s nothing you can do about it.

Parley:  (to class) Well, I wasn’t an apostle, just an elder, but because the judge was boasting thus, and the witnesses were liars, I stayed quiet and made no defense.

Judge:  Mr. Pratt!  Do you hear these charges?  Why do you not make a defense?  Well, I am ordering you to prison, or to pay a large fine.

Parley: (to class) I wouldn’t reply.  This greatly exhausted their patience.  Finally, about midnight, I asked Brother Petersen to sing a hymn.

Ziba:  (singing, or doing something similar to singing)
O, how happy are they
Who the Savior obey
And have laid up their treasure above!
Tongue can never express
The sweet comfort and peace
Of a soul in its earliest love.

O, the rapturous height
Of that holy delight
Which I felt in the life-giving blood!
By my Savior possessed.
I was perfect, bless’d
As if filled with the fullness of God.*

Parley: (to class) This exasperated them still more, and they pressed us greatly to settle the business by paying the money.  I then observed as follows (speaking to judge), May it please the court, I have one proposal to make for a final settlement of the things that seem to trouble you.  It is this: if the witnesses who have given testimony in the case will repent of their false swearing, and the blackguardism and abuse, and all kneel down together, we will pray for you, that God might forgive you in these matters.

Judge:  My big bull dog [would better] pray for me [than you]!

Parley: (to class) The court adjourned and I was taken to a nearby pub and locked in till morning as the prison was some miles distant.  In the morning, the officer appeared and took me to breakfast.  Then we waited for my journey to prison.  I whispered to Brother Petersen to join the other elders and continue on their way, and I would join them later.

Parley: (to class) After waiting a while, I requested of the officer that I might step outside.  I walked out into the public square accompanied by him.  Said I (speaking to Officer Peabody), Mr. Peabody, are you good at a race?

Officer Peabody: No, but my big bull dog is! (Pats imaginary dog) And he has been trained to assist me in my office these several years. He will take any man down at my bidding.

Parley: (cheerfully) Well, Mr. Peabody, you compelled me to go a mile; I have gone with you two miles.  You have given me an opportunity to preach, sing, and have also entertained me with lodging and breakfast.  I must now go on my journey.  If you are good at a race you can accompany me.  I thank you for all your kindness.  Good day, sir.  (Runs across the classroom, while Officer Peabody stares with mouth wide open.)

Parley: (stopping and turning to Officer Peabody) Wouldn’t you like to race with me, officer?

Parley: (to class) He did not awake from his astonishment sufficiently to start in pursuit till I had gained, perhaps, two hundred yards.  I had already leaped a fence, and was making my way through a field to the forest on the right of the road.

Officer Peabody: (Suddenly coming to senses.  Pointing and ordering imaginary dog) Ho!  Stu-Boy, seize him!  Take him down! (Running after Parley and pointing) Stu-Boy, lay hold of him, I say!  Down with him!

Parley: (to audience) The dog was fast overtaking me, and in the act of leaping upon me, when, quick as lightning, the thought struck me to assist the officer in sending the dog.  I pointed my finger in the direction of the forest, clapped my hands and shouted, Stu-Boy!  Take him down!  Get him, Boy!  The dog hastened past me with redoubled speed towards the forest, being urged by the officer and myself, and both of us running in the same direction.  I soon lost sight of the officer and the dog and have not seen them since.

Parley:  The officer kept the Book of Mormon I had dropped at the house of Simeon Carter and read it with attention.  It wrought deeply upon his mind, and he went 50 miles to the church in Kirtland, and was there baptized and ordained an elder.  He then returned to his home and commenced to preach and baptize.  A branch of about sixty members was soon organized in the place where I had played such a trick on a dog.

*O, How Happy Are They, by Charles Wesley, first and last verses
(This script adapted from Parley P. Pratt’s autobiography, with most of the words direct quotes.)

Missionary Methods
Principles and methods used in early missionary work, besides Elder Pratt's entertaining dog-evasion, included:
1) Teaching strictly the words of the Prophet Joseph Smith's revelations and the principles of the Gospel contained in the Bible and the Book of Mormon.  From these foundations, however, the elders were free to teach "as they shall be directed by the Spirit." (History of the Church 1:148-54)  We have just returned to this method with our new Preach My Gospel method.
2) Preaching to large groups.  This was a popular form of entertainment among the people of the time.  "With no trouble raising an audience, an interesting or inspiring preacher could smartly influence public opinion and sell his spiritual wares with considerable skill."  Usually a preacher spoke for at least an hour, often two. Ask any prospective missionary if he'd like to try this one out!
3) Publishing periodicals.  "Virtually nonexistent in 1800...religious periodicals had, by 1830, become the grand engine of a burgeoning religious culture, the primary means of promotion for, and bonds within, competing religious groups"..."Joseph Smith's revelations appeared in Mormon periodicals before publication in book form."  The newspapers at this time were The Evening and the Morning Star (Independence), The Messenger and Advocate (Kirtland), and The Elder's Journal (Far West).  Adding to our printed periodicals today, we have the worldwide reach of the internet, television and radio.
4) Debates with other clergy.  Almost every missionary journal of the day recorded confrontations with other ministers. Thankfully, we no longer do this, since it is ineffective and stifles the Spirit.  Now we focus on our similarities in belief and then offer to add to it, as President Hinckley frequently advised.
5) Focusing on the basic principles and ordinances of the gospel and challenging investigators to commit to try them. Elders boldly preached the first principles or "'five points' as some called them: faith in Christ, repentance, baptism by immersion, receiving the Holy Ghost through the laying on of hands, and then living a life of devout obedience to divine commandments, reinforced by challenging their listeners to 'prove all things'" through personal revelation and acting in faith.
(This information from Journal of Mormon History, Vol. 24, No. 2, pp. 9, 12, 17-18, 24, 26 respectively)

Revelations Received in Kirtland
How many of the sections of the Doctrine and Covenants were received in the Kirtland area?  (The answer is 37, or approximately 25% of the sections.)  In addition, most of the Joseph Smith Translation was done during this era.

If you like, have class members look refer to the chronology table in the front of the Doctrine and Covenants to see which sections were revealed here, then look at the section headings to itemize doctrines of importance that were revealed here.  These will include the Law of Tithing, the Law of Consecration, The Kingdoms of Glory, the Word of Wisdom, Revelations on the Second Coming, Priesthood, and many more.

(Click on the image below to enlarge a map of the LDS settlements in the Kirtland area.  Then right-click to save it and print it, if you are interested in doing so.) 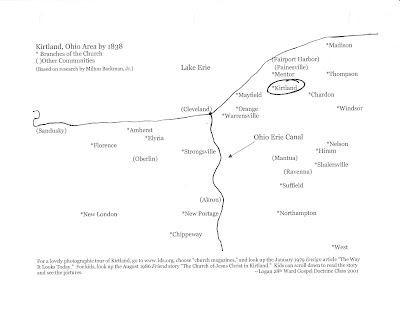 Thank you, Nancy, for the Parley P. Pratt story in skit format!

In case it might help someone who hasn't already given this lesson, the hymn sung by Ziba Peterson fits "O What Songs of the Heart" (Hymn 286)--and the message is very similar, for that matter--provided that you repeat the last two lines of each verse as a refrain (as Hymn 286 does).