Recap: The Saints had begun gathering to Ohio in early 1831. In late spring a large group of New York Saints joined them. The Lord then instructed the Saints that this was only a stopping point along the way, but despite that, they should "act upon this land for years" (D&C 51:17) and it would turn unto their good. By mid-summer, the final location was announced as Jackson County, Missouri. The Saints were to move there slowly, over years, so as not to overwhelm and alarm the frontier town.

21 I will not that my servant Frederick G. Williams should sell his farm, for I, the Lord, will to retain a strong hold in the land of Kirtland, for the space of five years, in the which I will not overthrow the wicked, that thereby I may save some.

22 And after that day, I, the Lord, will not hold any aguilty that shall go with an open heart up to the land of Zion; for I, the Lord, require the bhearts of the children of men.

If after 5 years the Lord would not hold any guilty for moving to Jackson County, we can presume that he would hold people guilty for going earlier if not commanded. As discussed in the previous lesson, many did not wait 5 years to go up to Zion, and perhaps partly because of that, there was no Zion in Jackson County when the 5 years came. The Saints were driven out of Jackson in 2 years. (See Chronology of Church History.) By November of 1833, they were fleeing for their lives to Clay County.

Would we be willing to stop at someplace we knew was only halfway to Utopia? It wouldn't have been easy. Yet those who did "act upon [the] land as for years" were still in Kirtland for the marvelous dedication of the Kirtland Temple in 1836!

Section 64 promises that the Saints will get to Zion if they can forgive each other and if they can share what they have with each other.  These are two very, very difficult commandments to follow which most of us struggle with throughout our lives.

Section 65 tells us that we should pray for the Lord's Kingdom to come on the earth, for that day when Christ shall be king. An interesting note is made by Steven Harper:

"In 1838, Judge Austin King charged Joseph Smith with treason and confined him in jail at Liberty, Missouri, for teaching the doctrines given in section 65. Parley P. Pratt wrote that Judge King 'inquired diligently into our belief of the seventh chapter of Daniel concerning the kingdom of God, which should subdue all other kingdoms and stand forever.' The Saints testified that they believed the prophecy, and Judge King instructed his clerk, 'Write that down; it is a strong point for treason.' The Saints' attorney objected. Is the Bible treason? The next time he was charged with treason, Joseph did not escape. A month after 'setting up the kingdom of Daniel by the word of the Lord' and declaring his intent to 'revolutionize the whole world,' Joseph Smith's life was ended abruptly by a lunch mob in Carthage, Illinois, on June 27, 1844" (Steven C. Harper, Making Sense of the Doctrine and Covenants: A Guided Tour through Modern Revelation, electronic version, Deseret Book, 400). 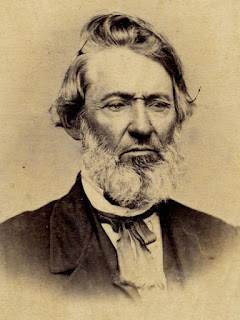 Section 66 is a personal revelation to Brother William E. McLellin, which he wrote as the Prophet dictated it. Brother McLellin's mother was a Cherokee, making him half Lamanite, if you believe the Cherokee tribes descend from the Book of Mormon peoples as I do and as the early Saints did (Joseph Smith Papers). Brother McLellin, a brand-new convert, wanted to try the Lord and His prophet Joseph Smith by asking for the answers to 5 questions that were very important to him, but without telling the Prophet that he had these questions. That evening, he wrote the revelation in his journal and added that it "gave great joy to my heart because some important questions were answered which had dwelt upon my mind with anxiety and yet with uncertainty." He never revealed what the questions were, but he had asked in faith and received a testimony because of them (Harper, 403).

Harper reports that Brother McLellin used his journal after this point as an "accountability report" on his obedience to this revelation. In his honesty of writing, many lapses are recorded.

1) He set out on the mission he was called to, preaching the gospel and blessing the sick. He tried to "be patient in affliction," but the winter wore him down and he left his companion and returned to Kirtland around Christmastime of 1831. He was rebuked by the Lord in D&C 75:6-7 and called to service again.

2) He set out on the second mission, but his health and his faith waned, and he again left his companion.

3) He took a job to earn money and he married, all while he was supposed to be on a mission, unencumbered by family obligations (D&C 66:10).

4) He and his bride dashed off to Jackson County, despite being commanded "go not up unto the land of Zion" (D&C 66:6).

5) He did not consecrate his money to the bishop there, but bought two lots on Main Street in Independence, after being commanded to "think not of [his own] property" (D&C 66:6).

Despite disobeying revelations given specifically to himself in answer to his questions, he still believed Joseph Smith to be a prophet and wrote as much in August 1832. Joseph Smith publicly called him out for his disobedience.

Brother McLellin's time in the Church was brief but highly eventful. His faithfulness was rather like a yo-yo, with extreme highs and lows. He had requested the revelation now known as Section 66 shortly after joining the Church in 1831. Due to his disobedience, he was excommunicated in 1832, but soon after was reinstated. In 1833 and 1834 he served two short missions. He was called as an Apostle in 1835. He formally left the Church in 1836, but apparently changed his mind soon and rejoined. He was called again as an Apostle in 1837. He was excommunicated again in 1838, admitting that he had gone "his own way and indulged himself in his lustful desires." He was again excommunicated, this time never to return, and "he spent the rest of his long life struggling to resolve the dissonance between his unshaken testimony and his unwillingness to repent" (Joseph Smith Papers; Harper, 407).

It is impossible for us to know what personal struggles Brother McLellin had in this life that made obedience so difficult for him. But he never forsook his testimony of this revelation. In 1848, ten years after he and the Church parted ways, he wrote in his journal, "I now testify in the fear of God, that every question which I had thus lodged in the ears of the Lord of Sabbaoth, were answered to my full and entire satisfaction. I desired it for a testimony of Joseph's inspiration. And I to this day consider it to me an evidence which I cannot refute" (Journal entry, quoted in Harper, 404). He tried several break-off groups through the years, but finally left all organized religion. William McLellin died in 1883 in Independence, Missouri at the age of 78. 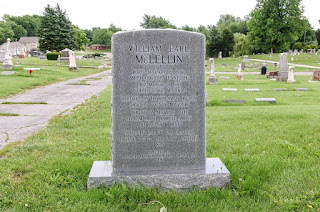