THE ELEPHANT IN THE SECTION

Rather than providing lesson material for all of Sections 133-134, this post will focus solely on the verse in Section 134 that "Come, Follow Me" did not mention:

"...we do not believe it right to interfere with bbond-servants, neither preach the gospel to, nor baptize them contrary to the will and wish of their masters, nor to meddle with or influence them in the least to cause them to be dissatisfied with their situations in this life, thereby jeopardizing the lives of men; such interference we believe to be unlawful and unjust, and dangerous to the peace of every government allowing human beings to be held in cservitude" (D&C 134:12).

I'm sure you all know that "bond-servants" is a euphamism for "slaves."

I don't feel competent to address this topic. I'm Danish and English. I don't have the perspective of Black or Native American Saints. None of my ancestors were enslaved. I recently discovered one was a slaveholder, which appalls me! But despite my lack of experience, I feel it would be worse to ignore this verse than to write something with flaws. So if you are Black or Native American, please give me your grace as you read my bumbling efforts, and please feel free to share any helpful insights or perspectives in the comments (if you are on a computer--phones don't have the option).

THE CRIME OF SLAVERY

Today when we discover someone has been held captive and forced to labor for another (a case of which was just discovered today by police in my home state of Utah), we are aghast, appalled, incensed, and our stomachs literally turn. And rightly so! It's insane for "civilized," "cultured," rich, educated people to think that it is okay to enslave others to do their bidding.

And yet, in 1835, not only tradition but scientific evidence supported the "fact" that there was a natural human hierarchy: that whites, Blacks, and Native Americans were all completely different "races," and one of those was fit to be the master (even master/benefactor!) of the others, one was fit for hard labor, and one was simply savage. And since the Bible advised slaves to obey their masters, religion could back it up as well. (For example, see Ephesians 6:5.)

The truth is that the economy of the cotton plantations and a few other industries absolutely depended on free labor to flourish. The truth is that the white colonists needed free land upon which to expand their farms and cities. The truth is that when a civilization thinks it needs something morally reprehensible, it finds justification for it. And the truth is that when an ethnic group is oppressed, they behave in a way that justifies the belief that they are inferior. For example, it was illegal in almost every state of the Union to teach an enslaved person to read, for fear that they would be able to use words as tools and weapons to rise above their "station." (See, for example: North Carolina law.) White people knew in their hearts that their slaves had reason to be deadly angry with them. If Latter-day Saint missionaries shared the gospel with slaves, they would teach them to read the Book of Mormon, they would give them potential tools of rebellion. The economy absolutely required Blacks to remain illiterate. And since enslaved Blacks remained illiterate, they seemed less intelligent.

In many ways, the world has become more evil as time goes on. But in many ways, it has become much, much better. The fact that a scripture like this would never, ever be found among the writings of the leaders of any but the most extreme religions today is reason to rejoice. The fact that a religion in most countries of the world, certainly in the western world, would never need to consider how to deal with converts who had not the legal freedom to choose anything but their own thoughts is reason to rejoice. Although I would love to meet the Prophet Joseph Smith, I would never want to live in the society of Joseph Smith's day. Joseph Smith became more and more opposed to slavery as his life progressed, making manumission (the gradual freeing of enslaved people--considered by many a safer and more manageable solution for both Blacks and whites than abolition) part of his platform as a candidate for United States President, but the membership of the Church was still mostly European. He had a pretty homogenous population to work with.

When Brigham Young led the Church, the issue of racism became more pronounced because there was a large group of Southern families from Mississippi who joined the Church. Naturally, they had slaves. Slavery was the biggest political issue in the United States--so big that it would later cause the deadliest war in the United States. Although the body of the Church moved west and completely escaped the horrors of the Civil War, they took some racist ideas with them. In fact, they took some actual slaveholders with them: those Mississippi Saints. Some of these Church members did not free their slaves. They had never known life without servants; perhaps they did not know how to live without them. Definitely they were wrong in keeping slaves--all of us know this today--but even Brigham Young thought slavery had Biblical precedence and went with the prevailing opinion that slavery was okay with God, as long as masters treated their slaves kindly.

Blacks were not the only enslaved people in Utah.

"The arrival of the pioneers in 1847 disrupted a thriving trade in Native American slaves. Utah-based Indians, particularly Chief Walkar’s band of Utes, served as procurers and middlemen in a slave-trading network that extended from Santa Fe, New Mexico, to Los Angeles, California, and involved Spanish, Mexican, American, and Native American traders" (History To Go).

Brigham Young advised the Saints to buy Native children who were offered for sale in order to give them a better life and raise them in the gospel. They were going to be sold anyway, and this way they would be in a safer, kindlier place. One chief brutally murdered an infant in front of settlers when they refused to purchase the child, then blamed them for its death. No one wanted that to happen again! But by buying the children--into either adoption or temporary servitude--the white Utahns unwittingly increased the slave trade.

The policy that evolved into banning Blacks from priesthood ordination, including temple familial priesthood, was based on racist traditions and interracial conflict. It was unfair. It was hurtful to many. It took place within a society that was poorly informed and ill-equipped to be fair.

We know that Church leaders have made mistakes because they are imperfect humans, but we beg to ask, "Why would God not intervene and give a revelation on it?" My best answer is that He did intervene, but in His timeframe, which seems really, really slow in our timeframe because His intervention will not supercede agency, even the agency of an entire culture. (Read my thoughts on the priesthood ban here.)

WHERE DO WE GO FROM HERE?

It is absolutely impossible to understand the past without living in it. And yet we must learn from the past in order to improve the future. We Saints are sorely flawed and will continue to make mistakes as did the Saints of the nineteenth and twentieth centuries. Let's just make sure they are not the same ones. Look around your ward, neighborhood, school, workplace! Make sure everyone is valued, everyone is included, everyone is heard. Sometimes the best thing we can do is consider that our assumptions or traditions might be wrong, and then listen without our defenses up.

One thing is sure: The gospel is the way to lasting joy for everyone. We are more alike than we are different, and in 2021, with global travel and instant communication, we are more alike than we have ever been throughout history. We must avoid polarization. There is only one race of humans. There is only one family of God. We are all on the same team. Let's embrace everyone equally and celebrate the uniqueness of each child of God. In the heavens, all will be made more than fair--all will be made glorious through Christ. 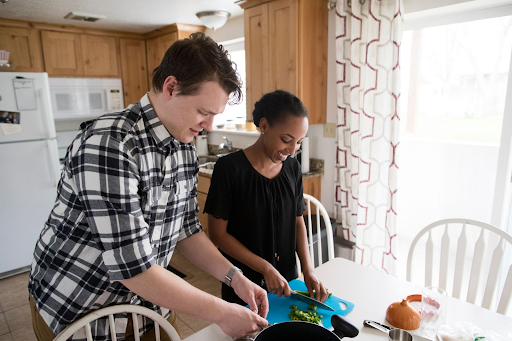