Book of Mormon Lesson #22 "Have Ye Received His Image in Your Countenance?"

SEEING THE DIVINITY IN OTHERS

“When I was 18, as I was preparing to serve a mission, my bishop called me to teach the Sunbeams. I had never before learned to love others more than myself until I had served those children in such a simple assignment. With time and patience I learned how to keep those seven children in their seats and listening to a simple lesson.
“One day I invited Mike(name changed) to come to church and sit in my class. Mike was my age but had stopped attending church completely by the time he was 12. We had remained friends over the years as I had served as the deacons quorum president, the teachers quorum president, and first assistant to the bishop in the priests quorum. He had been the topic of many fellowshipping discussions and was often part of my prayers as the years had passed. Once in a while Mike would accept my invitations to come to an activity. It always surprised me when he did, so I kept inviting him.
“At that time, Mike had long, black hair and a beard. His complexion was dark and pleasant. I don’t remember when I invited him to my Primary class, but one day he showed up.
“’Class, I would like to introduce you to my friend Mike,’ is how I began my lesson. ‘He is visiting us today.’﻿ 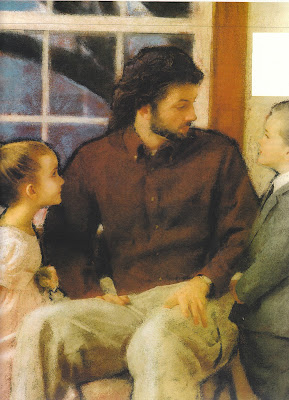 (This image is available in the May 2000 print New Era)

“Mike sat next to me in front. The children sat in a semicircle with their eyes fixed on him. They were much quieter than usual. I was about five or six minutes into the lesson when one little boy got up from his chair and walked across the room and stood directly in front of my friend. The boy paused for a moment and then climbed onto his lap. I continued with the lesson as I watched the two of them from the corner of my eye.
“The boy sat looking into Mike’s face. Mike was quite uncomfortable but did not interrupt the lesson or turn the boy away. The other children watched the two of them for a few minutes.
“Then one of the girls climbed off her seat and approached Mike. I was intently interested in seeing how Mike would react and did not want to instruct the two children to return to their seats. The girl stood with her hand on Mike’s knee looking into his face.
“Then it happened. The boy on Mike’s lap reached up with both hands and turned Mike’s face directly to his. I stopped my lesson to see what was about to unfold.
“With the innocence of a child, he said to Mike, ‘Are you Jesus?’
“The look on Mike’s face was total surprise. It seemed, as I glanced at the children’s faces, they all had the same question on their minds.
“Mike looked at me as if to say, Help, what do I say?
“I stepped in. ‘No, this is not Jesus. This is His brother.’
“Mike looked at me as if in shock.
“Then without hesitation the boy in Mike’s lap reached up and wrapped his arms around Mike’s neck. ‘I can tell,’ the boy said as he hugged Mike.
“The rest of the children smiled and nodded in agreement as their simple question was answered. Mike blinked back the tears in response to the love he felt from this small Sunbeam. The lesson went on, but that day the teacher who taught the most was a three-year-old child.
“Mike spent more than a year getting ready to serve a mission. It thrilled me to learn that he left for the mission field a few months before I returned. I still think of the scripture in Matthew 18:5 [Matt. 18:5]: ‘And whoso shall receive one such little child in my name receiveth me.’  (Ken Merrell, New Era, May 2000)


The children saw something in Mike that he hadn’t seen in himself.  This initiated a change in him toward actually becoming a disciple of Christ.  This is the same way that Alma viewed the people of Zarahemla.  He saw beyond the surface of their errors and their arrogance to their divine potential.  They had forgotten who they were, and Alma, like the children in the Sunbeam class, successfully reminded them.  This caused them to change themselves.

DRAWING OUT THE DIVINITY IN OTHERS

We all have (or should have) the desire to draw out the divine nature in those we see who have lost touch with it.  Alma’s work among the people of Zarahemla can be a good guide for our similar work.  It was not Alma who changed them; he inspired them to come to Christ that He might change them.  How did he do this?  Because they were “raised in the church,” he did not have a lot of teaching to do; mostly what he did was remind.

1.      Reminding them of their spiritual heritage. First Alma helped the people remember the Lord’s blessings to the previous generation, because of their repentance and faith.  (Alma 5:4-7 up to “…the everlasting word.”)
2.      Reminding them of their own spiritual rebirth.  Alma asked the people three questions, which were really the same question:  Do you remember gaining your spiritual witness and getting on the Path?  (Alma 5:14)
3.      Asking them to assess their faithfulness since.  He asked them two more questions, which were also the same question:  Have you continued on that path?  (Alma 5:15)
4.      Helping them to see the eternal perspective.  First, Alma helped them visualize the experience the righteous will have that the judgment bar.  (Alma 5:16)  Then he helped them imagine what the future may hold if they continue down the wrong path.  (Alma 5:18-19)
5.      Showing them that they are not beyond hope.  (Alma 5:33-35)
6.      Placing the responsibility on their shoulders.  He “put the ball in their court” by placing the options before them and asking them what they planned to do now.  (Alma 5:53-55; 60)
7.      Bearing testimony.  Throughout his discourse, Alma bore testimony of the truthfulness of his words.  (Alma 5:48)

HOW TO GAIN A TESTIMONY

In bearing his testimony, Alma told the people how this change was wrought upon him.  It’s interesting that he did not mention his overpowering experience with the angel.  Perhaps, it being Zarahemla where this occurred, they already were familiar with the story.  But perhaps he just wanted to focus on the part of his conversion that was relevant to them, that was similar to what they could expect.  (Alma 5:45-47)

1) Desire/effort.  He "fasted and prayed for many days."  He may have done this many times, the first of which would have been while he was paralyzed and in the depths of despair after the angel's visit.  (Alma 36)
2) The Spirit of Revelation
3) The Spirit of Prophecy 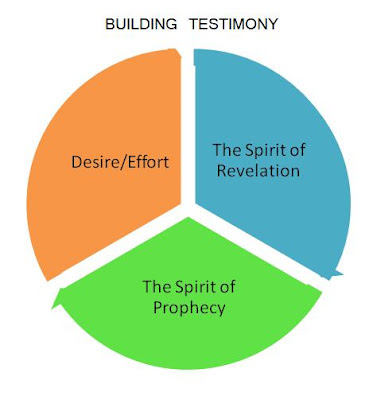 Our previous lesson focused on the importance of the element of desire in gaining a testimony, so we will focus here on the other two elements.  The Prophet Joseph Smith testified, “Testimony is always attended by the spirit of prophecy and revelation” (Teachings of the Prophet Joseph Smith, p. 148).

THE SPIRIT OF PROPHECY

Can you recite off the top of your head the scripture that gives us the definition of the spirit of prophecy?  “The testimony of Jesus is the spirit of prophecy” (Rev. 19:10)  Prophecy is not about telling the future nearly so much as it is about testifying of Christ.  The purpose of all scripture is to testify of Jesus Christ.  As Jacob said, “None of the prophets have written, nor prophesied, save they have spoken concerning this Christ.”  (Jacob 7:11)  Alma had access to the prophecies of both the living prophets of his day who had and bore testimonies of Jesus, and to the prophecies of the Brass Plates and the Plates of Nephi and Lehi, and the Plates of Ether.  The spirit of prophecy has an effect on us when we find the Savior through the testimony of others.

The spirit of prophecy was evident in the development of Alma’s father’s testimony.  (Alma 5:11).  The spirit of prophecy was also evident in the development of Enos’ testimony.  (Enos 1:1,3-4)  This is one element of testimony that parents and leaders can plant in our children and students.  It can be there and waiting for them when they are ready to add the other ingredients.

“When individual members and families immerse themselves in the scriptures regularly and consistently…other areas of activity [in the church] will automatically come.  Testimonies will increase.  Commitment will be strengthened.  Families will be fortified.  Personal revelation will flow.”  (Ensign, May 1986, p. 81)

Such is the power of the spirit of prophecy!

THE SPIRIT OF REVELATION

The spirit of revelation takes those testimonies of Jesus which we hear and read, and through the catalyst of our desire, tells us personally, straight from God to us, that they are true.  This is when we can say, as Alma did, “I know of myself,” independent of any outside influence (Alma 5:48).  (See also Enos 1:5.)  Moroni’s famous promise confirms how these three elements combine to build a testimony in Moroni 10:3-4:

For most of us, this conversion process takes place by degrees.  As Elder McConkie wrote, “Repentant persons become alive to one spiritual reality after another, until they are wholly alive in Christ and are qualified to dwell in his presence forever” (Doctrinal New Testament Commentary, 3:401).  Moroni tells us that we may use this process again and again.  (Moroni 10:5)

We can each use these teachings of Alma’s to remind ourselves and others of the eternal perspective and to build our testimonies.  It’s a good opportunity to reassess ourselves.  Can His image be seen in your countenance?  And can you see the possibility of His image, the divine potential, in those people you teach and serve?
Posted by Nancy W. Jensen at 12:16 PM

Nancy- I love your lesson. I really want to show the picture from the May 2000 New Era. When I go to lds.org, there is not print of the picture. Where did you find the New Era PRINT edition online?

The print New Era isn't available online this far back. I scanned it from my hard copy, hoping the Church wouldn't mind... Your meetinghouse library may have it, though. (You could save and print it off my blog, if not.)

You have the gift of understanding and application. Thanks again for sharing your knowledge. It really helped me to add a deeper dimension to my preparations. Mahalo, malia

I never understood the usefulness of working on my ancestor’s personal histories. On the other hand, it is easy for me to understand the value of vicarious temple work. They need that work for exaltation. If they don’t (or if we don’t) write down their personal history, it won’t have any effect on their chance of exaltation. And I am all about doing the absolute necessary and leaving out the optionals.... However, Alma 5 points out something interesting. Alma the younger, perhaps the most qualified to teach on the subject of inactivity to activity reveals the process for doing so. The first step in that process is reminding them of their parents and grandparents spiritual conversions.

So. Does publishing and sharing personal histories have an effect on our deceased family members- still no... but perhaps this is a necessary work for the living. Personal family history stories will inspire faith among our less active family members, and keep active members faithful. They will remind you of the strong spiritual legacy you come from. Those struggling to understand their testimonies need to understand the spiritual experiences of their grandparents and parents and not just the pioneers 6 generations removed. Perhaps this is just another way the hearts of the children are turned to their fathers.