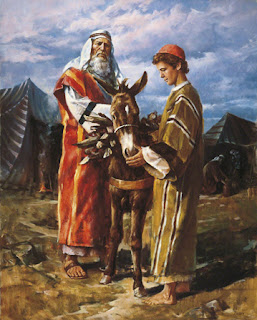 Of course, the offering of Isaac was a type of Christ (Jacob 4:5).  Isaac and Christ were both the promised, covenant, birthright sons.  The site known traditionally as the place where Abraham offered Isaac is now the site of the Dome of the Rock.  A few hundred yards to the north on a higher point of that same ridge system is Golgotha, the place where God offered his Only Begotten Son as a sacrifice.  It is likely that Isaac was in his thirties as the time of the sacrifice (see Gen. 23:1), and old enough to be able to overpower his father and refuse to be placed on the altar, but "they went both of them together" (Gen. 22:6).  Likewise, the Savior of the World submitted himself to the will of his Father.  Elder Dallin Oaks tells us, "This story...shows the goodness of God in protecting Isaac and in providing a substitute so he would not have to die.  Because of our sins and our mortality, we, like Isaac, are condemned to death.  When all other hope is gone, our Father in Heaven provides the Lamb of God, and we are saved by his sacrifice" (Ensign, Nov. 1992, p. 37).
Posted by Nancy Wyatt Jensen at 3:25 PM