Before they entered the Promised Land, Moses, speaking for the Lord as the prophet, gave counsel to their future kings.  "When thou art come unto the land which the Lord thy God giveth thee, and shalt possess it, and shalt dwell therein, and shalt say, I will set a king over me, like as all the nations that are about me..." (Deut. 17:14).  Knowing that they would eventually choose dictatorship as their form of government, he outlined the Lord's instructions for the kings of Israel.  This is called "The Kings' Law" (Duet. 17:14-20).

Verse 15:  There are two qualifications a king must have.  "Thou shalt in any wise set him king over thee, (1) whom the Lord thy God shall choose: (2) one from among thy brethren shalt thou set king over thee: thou mayest not set a stranger over thee, which is not thy brother."

Verses 18-19:  There are two requirements made of the king.  "(1) He shall write him a copy of this law...and (2) he shall read therein all the days of his life..."  The results of living those two requirements will be "...(1) that he may learn to fear the Lord his God, (2) to keep all the words of this law and these statues, to do them: (3) that his heart be not lifted up above his brethren, and that he turn not aside from the commandment."  The promise to the king, if he keeps these restrictions and requirements, is that "he may prolong his days in his kingdom, he and his children."

We will see that Solomon ignored the king's law, which lead to his downfall.

THE ANNOUNCEMENT OF THE TEMPLE, THE CORONATION OF SOLOMON

King David announced that Solomon was the son who has met the qualifications to be king (1 Chron. 28:5).  He publicly gave Solomon excellent advice and announced the first thing that Solomon was to do as king:  Build the temple, the palace for the Lord God (28:9-29:1).  He told the people that he had prepared of his "might" the building supplies for the temple already.  Knowing that he himself would never build it, never enter it, yet he did everything the Lord allowed him to do to provide for the temple.  Then he told the people that not only from the country's wealth, as king, had he laid aside, but "over and above," he had also contributed personally, from his own wealth (29:2).  Then he called for the people also to donate to the temple, which they did willingly and joyfully. (29:5,6,9).

1 Kings 6 names the dimensions of the temple.  The present-day equivalent is 100 ft. long, 30 ft. wide, and 45 ft. high (according to the Institute manual).  (You may want to make a poster-board outline, using 1/2" to one foot as your scale.  If you can find the dimensions of your local temple, make an outline of that as well.  The Logan Temple is roughly 120 ft. long, 80 feet wide, and 170 feet to the top of the east tower.  If you would like to include interesting facts about temples as a little game, quiz, or just diversion in your lesson, there are some fun things at ldschurchtemples.com) 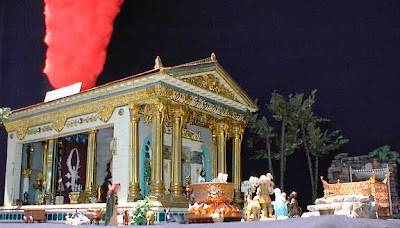 King Solomon gave a beautiful public prayer to dedicate the temple.  This is found in 1 Kings 8.  In a beautiful poetic manner he itemizes six different situations in which people might pray for aid, and asks the Lord in each case, "Then hear thou in heaven and forgive" and help the people out of their difficulty.  If...

Solomon had some forward-thinking ideas for governance.  He was the first king to have a cabinet.  It is listed in 1 Kings 4:1-6.  The entire house of Israel was unified under Solomon, and his reign covered the whole area of the Holy Land (1 Kings 4:20-21).  The people were no longer divided into tribes; instead Solomon divided them into twelve geographic regions.  Over each of these regions, he placed a governor.  These men are listed in 1 Kings 4:7-20.  This chapter gives some of Solomon's really great ideas that he developed over time, but some also that grew to be problems.

SOLOMON'S FOLLIES
Now we can refer back to the Kings' Law.  What were the restrictions?  The first was not to multiply horses.  "Horses" refers to military might, because horses were part of the mighty war machines of the day, the chariots.  Solomon had 40,000 stalls of horses (4:26).

The second restriction was not to multiply wives.  Solomon had 1,000 wives and concubines (1 Kings 11:1-3).  Verses 5-7 list the idols the wives brought with them, and the very worst ones imaginable are included:  Molech and Chemosh.  They are two different names (in two languages) for the same god and the worship of this idol was so horrible, so cruel, it's unbelievable.

The last restriction was not to multiply wealth.  1 Kings 4:22-28 itemizes the provisions required for the king's household for just one day.  (The equivalent is 188 bushels of flour and 370 bushels of meal.)  Each province had to supply a whole month.  It was a truly heavy tax.

Solomon was meant to be great and to bring Israel to greatness (1 Chron. 29:25), but riches and honor make for a very difficult test that few people can stand.  In fact, any strength or unusual gift that we have can become our downfall if we do not keep it in check.

Elder Dallin H. Oaks said that Satan will try to use our strengths as well as our weaknesses to pull us down to destruction.  How do we avoid this problem?  "The quality we must cultivate is humility.  Humility is the great protector."  The restrictions and requirements of the Kings' Law were designed to help the king stay humble despite his power.

Elder Oaks said, "If we are humble and teachable, hearkening to the commandments of God, the counsel of his leaders, and the promptings of his Spirit, we can be guided in how to use our spiritual gifts, our accomplishments, and all of our other strengths for righteousness.  And we can be guided in how to avoid Satan's efforts to use our strengths to cause our downfall" (Ensign, October 1994).

In the words of King David, "Thine, O Lord, is the greatness, and the power, and the glory, and the victory, and the majesty: for all that is in the heaven and in the earth is thine; thine is the kingdom, O Lord, and thou art exalted as head above all.  Both riches and honour come of thee, and thou reignest over all; and in thine hand is power and might; and in thine hand it is to make great, and to give strength unto all" (1 Chron. 29:11-12).

We need to ask ourselves which kind of palace we are building with the gifts that we have been given.  We might ask ourselves, as King David asked Israel, "Who then is willing to consecrate his service this day unto the Lord?" (1 Chron. 29:5)

A typical teaching style of the Old Testament is to juxtapose good examples with bad examples.  In the case of the kings' use of power, there are bad examples heaped upon each other.  If you would like to use a contrasting story of righteous use of power and wealth (although in the latter-days, rather than the Old Testament), please refer to the fascinating story of Jesse Knight in the next blog entry.
Posted by Nancy Wyatt Jensen at 9:58 AM