After learning about King Saul, King David, and King Solomon and their great difficulties, one may wonder, "Is there anybody out there who can handle great wealth and power righteously?"  Let me introduce you to the story of a man who did:  Jesse Knight.  It would not be entirely inappropriate to include Jesse's story in your gospel doctrine study as a counterbalance to King Solomon's. 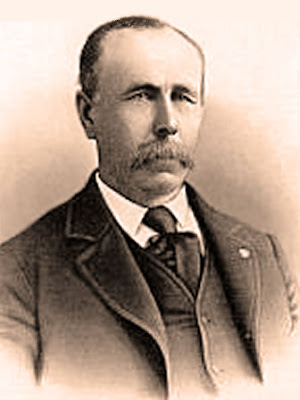 Most Latter-day Saints are familiar with Newell K. Knight, who is mentioned in the Doctrine and Covenants several times.  He was one of the first members of the Church, initially hearing the gospel preached at the Whitmer home.  He had been possessed of a devil and Joseph Smith cast it out (Kelly, p. 51).  He was faithful to the end of his life, which wasn't a very long time; he died before reaching Winter Quarters, leaving behind a wife and six little children with another one due.  He appeared in a vision to his destitute wife and told her that he would watch over her and the children as they continued the trek to Salt Lake, but that he had been called to the other side to be a witness for the atrocities committed against the saints (Black, p. 171).  The youngest of the six Knight children at that time was a one-year-old boy named Jesse (Garr, p. 626).

Although he was raised in an LDS family and married an active Latter-day Saint, Jesse lost his commitment somewhere along the way.  "Then in 1887 an experience forever changed his commitment to the Church. A rat fell in the family well, died, and decomposed. Jennie, his youngest daughter, was the first to become ill from drinking the contaminated water.

"Despite his professed lack of faith, Knight was finally persuaded to bring in elders to give her a blessing, and Jennie recovered, something he always considered miraculous.

"His oldest daughter Minnie, however, died of the infection, and he remembered that 17 years earlier she had nearly died of diphtheria. At that time Knight had promised that he would not forget God if the Lord would spare Minnie's life. As he described it, 'I had not kept that promise. . . . I prayed for forgiveness and help. My prayer was answered and I received a testimony'" (J. William Knight, The Jesse Knight Family [Salt Lake City: Deseret News Press, 1940], pp. 35–36, quoted on Brigham Young High School Website)

A few years before the turn of the 20th century, Jesse Knight had a manifestation that there was valuable ore in the Tintic mining district west of present-day Spanish Fork, Utah, beyond Utah Lake.  While on the Godiva Mountain where he had gone to think about problems, the Spirit told him, "This land is for the Mormons."  He interpreted that to mean there was treasure in the ground for the use of the Mormons and the Mormon Church. Another message he received was "that he was going to have all the money he wanted as soon as he was in a position to handle it properly, and that he would one day save the credit of the Church, which was then in debt...

"The whole manifestation came true" (Stegner, p. 201).  He staked out a small mine named the Junebug near the town of Eureka, Utah (now a ghost town). He made some money off its sale and began his philanthropy.

At first helping others didn't pay off.  He co-signed on loans for friends who didn't keep their end of the bargain, and ended up mortgaging his own home to pay them off.  But he didn't lose his generosity--just got smarter with it--and he secured a loan to buy a mine that experts said was a humbug, thus inspiring its name:  the Humbug mine.

Jesse hired a couple of men, and they worked on the Humbug mine for 2 months with no success.  Then, one day, they struck a vein, and the Humbug made Jesse Knight instantly rich.  The second shipment of ore he got out to the United States Smelting Company netted him over $11,000.
He continued to have manifestations of where to dig for ore in the surrounding properties which he bought: the Uncle Sam claim, the Beck tunnel, the Colorado claim, the Iron Blossom, and the Dragon.  By the time he bought the Colorado claim, "he was so sure of striking ore in it that he built an ore bin at the same time he was driving the tunnel.  The ore bin turned out to be in exactly the right place.  He did the same thing with the Iron Blossom...and the Dragon.
"A man with a shovel could simply dig up loose dirt and dig up wealth.  The whole floor was rich carbonate lead silver, without waste and as easy to mine as gravel.  By the time Jesse finished having manifestations about the claims in that area he was worth $10,000,000...
"There is something very close to inspiring in the way he used that money" (Stegner, p. 203).
That very first year, 1896, he built the town of Knightsville, Utah, 2 miles east of Eureka, including a meeting-house, an amusement hall, homes, and a school, because he didn't want his Mormon miners living in the rough environment of the mining towns.  "There were stores, churches, hotels, and a post office.  It was known as the only mining camp in the United States without a saloon" (Wikipedia).  He paid his miners 25 cents a day more than the prevailing wage, gave them Sundays off, and eventually convinced other operators that this was good business practice. He fired anyone he caught drunk.  (Nearby Eureka had plenty of saloons.)  By 1907, the population of Knightsville reached 1,000. 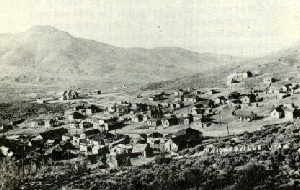 Knightsville, Utah
"He paid back all his back tithing, with compound interest, for the years in which he had ignored the Church.  Then, looking around for ways in which to use his money, he inaugurated a system of small loans to impoverished brethren" (Stegner, p. 207).  Soon he realized that allowing the poor to go further into debt was not the best idea, so he provided jobs instead.  There was a good deal of unemployment around Provo, so he hired men to build a road which was never finished, and to work a mine that never netted anything.  Even though he discovered the mine was worthless, he continued drilling another half mile, just to give the men work.
He bought a large amount of land in Alberta, Canada, and set up the townsite of Raymond (named for his oldest son, who helped establish it), offering the land cheap and interest-free for the first three years.  Within two years, he had 1500 settlers, mostly young Latter-day Saints who had been crowded out of the good farm land in Utah.  "When Canadian officials in bewilderment asked him why he was throwing his money around settling up that particular corner of Alberta on terms so ruinous to himself, he quite simply pulled out President [Lorenzo] Snow's twentieth century message: 'Men and women of wealth, use your riches to give employment to the laborer!  Take the idle from the crowded centers of population and place them on the untilled acres that await the hand of industry.  Unlock your vaults, unloose your purses...'" (Stegner, p. 205)
Giving his money to the benefit of the poor only made Jesse richer.  In 1906, his Knight Investment Corporation was founded, which soon included 80 corporations.
"He opened banks, built sugar factories and railroads, opened up a new country for farming.  The more money he found in his vaults the more enterprises he branched out into.  And eventually, strictly according to the first manifestation which had changed him from an obscure rancher to a fabulous and beloved magnate, he saved the credit of the Church...

"The last years of his life he spent being fairy godfather to Brigham Young University, at Provo.  Whatever endowment the school has is largely due to Jesse Knight" (Stegner, p. 207). 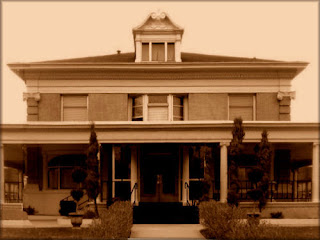 His own home at 185 E. Center, Provo, Utah
was lovely and comfortable, but not overly ostentatious.

"Uncle Jesse...took seriously the responsibilities which wealth laid upon him...His abiding sense of the group and the group's needs, his respect for the common man, and his concept of money as an instrument for social betterment were a reflection of that part of Mormonism...which was unerringly prophetic" (Stegner, p. 207).

During the last years of his life, the ore began to run out in the mines.  Only a couple were operating when he died at the age of 75, and by the end of the Great Depression, Knightsville was a ghost town, and the Knight fortune was gone.  But Jesse had accomplished what was needed.  Perhaps the Lord stopped multiplying the wealth because He knew that there would not soon be another like Jesse Knight who would state and live a belief that "The earth is the Lord's bank and no man has a right to take money out of that bank and use it extravagantly upon himself" (Mangum).

This is the best short story I have read on Jesse Knight. My father was born in Eureka in 1915 and my grandfather and grand uncles worked for Mr. Knight. A mining town without a saloon! Sundays off! Laughable by today's standards but a wonderful testimony to a man following the will of God and bringing blessings upon his fellow man.