Matthew 24 (Joseph Smith--Matthew in the Pearl of Great Price)

If you like, you could start the class by having a box or display of a number of items that could symbolize parts of the prophecy.  Have each class member choose something, then give them time to search the chapter and find how it relates to the scripture.  Then let each class member share his idea.

Items could include:  a picture of the temple, a stone or brick, a can of olives, a heart, a picture of mountains, a calendar, a miniature house, army toys (soldiers or miniature jeep), newspaper, sunglasses, flag, a star, a picture of Christ, a trumpet, an angel ornament or figurine, figs, a toy Noah's ark, binoculars, the book Harry Potter and the Chamber of Secrets, headphones or earbuds, a watch...


AN OVERVIEW OF THE OLIVET DISCOURSE 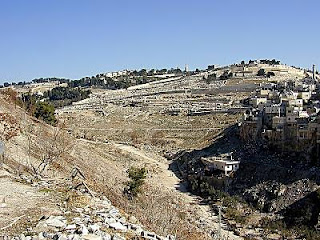 vs. 1-4:  The apostles ask Christ about the temple destruction and the Second Coming while on the Mount of Olives alone with him.

The Mount of Olives was as a temple to them, since the temple in Jerusalem was crowded with Passover pilgrims, and this was as a solemn assembly.

The Greek word parousia translated here as "the sign of thy coming" is "a technical term used in the New Testament to specifically denote the Second Coming" (Bible Dictionary, p. 742).

In their questioning, "the destruction of the temple...is carefully separated from the sign of Jesus' coming for final judgment at the end of the age" (Harper-Collins Study Bible, p. 1902).

vs. 5-6:  Christ warns not to be deceived when false Christs arise, and then states the chronology of what must happen before the Second Coming.


PROPHECY OF THE DESTRUCTION OF JERUSALEM, PERSECUTION OF THE CHRISTIANS AND JEWS, AND THE GREAT APOSTACY 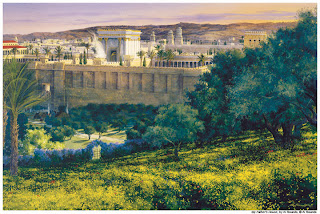 vs. 7-10:  Afflictions of the righteous, betrayals, false prophets, and love running cold would follow the death of Christ.

The persecution of the apostles is well known.  Under Nero, "He who was called Christian had committed crime enough in bearing the name to be put to death" (Talmadge, p. 587).  "In that day to join the Church was to prepare to die" (McConkie, p. 427).  Church meetings were held in secret in the first centuries following Christ, often in the catacombs--the underground burial vaults in Rome (Packer, p. 43).

vs. 11-17:  The steadfast will be saved.  When they see Jerusalem surrounded with armies, they should immediately flee (Luke 21:20) because the Abomination of Desolation will be nigh.

Gallus of Rome surrounded Jerusalem, then lifted the seige unexpectedly.  The Christians noted the sign and fled to Pella before the awful sieges of Vespasian and Titus began.  One early historian reported that every single Christian escaped (McConkie, p. 430; Talmadge, p. 588).  (See also George Horton, 'Be Ye Also Ready': The Amazing Christian Escape From the A.D. 70 Destruction of Jerusalem," Ensign, June 1989.)

The Abomination of Desolation referred to the terrible desecration of the temple by the Roman armies, including the slaughter of priests and patrons within its walls, the posting of their own ensign, and its looting and destruction.  The actual date of this destruction is thought to be Friday, August 9, A.D. 70 (Institute Manual, p. 155).  The destruction of Jerusalem was so thorough that it was actually plowed under (Talmadge, p. 588).

1,100,000 Jews were killed during the siege.  97,000 were carried captive and most of them killed later in mines or arenas (McConkie, p. 434; Talmadge, p. 588).  "Those who with Roman hands crucified their King at Jerusalem would soon themselves be hanging by the thousands upon Roman crosses in that same benighted area" (McConkie, p. 429).  The atrocities committed by the Romans were absolutely horrific: gladiators, crucifixions, and torchings for entertainment, among others.

vs. 20:  Because of those few elect, the Jewish race will not be completely destroyed.  The sorrows will be ended, or "shortened."

vs. 23:  The wars and rumors of wars at this time will not be a sign of the end of the world.

History records false prophets leading many into the desert.  One led 6,000 into the secret chambers of the temple where they met their demise when the temple was burned.  Many churches during the Apostacy also encouraged retreating into deserts or reclusive "chambers" as the way to bring Christ into their lives (Talmadge, p. 588).

THE SIGNS OF THE SECOND COMING IN THE LAST DISPENSATION 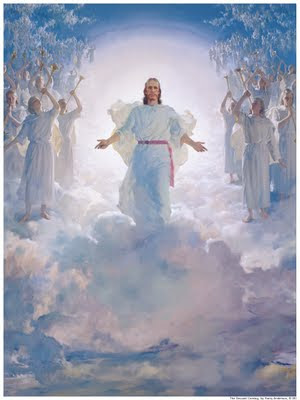 vs. 26:  The Second Coming will be very obvious to everyone; it will not be tricky to figure out whether Christ has returned.

Now the word parousia is used again, as clarification of which time period is concerned.

vs. 27:  The word eagles here is more often translated as "vultures" (for example, in the New Revised Standard Version and in the New International Version).  The elect will be gathered from around the world, flocking to the gospel and its "carcasse" or body, as vultures would be drawn from afar to eat carrion; it will be irresistible to them.

The early years of the Restoration saw this fulfilled by the emigration of British and Scandinavian converts to join the body of the Saints in the United States.  The gathering continues as converts join throughout the world.

vs. 28-30  They shall hear of wars and rumors of wars, famines, earthquakes.  Again there will be love running cold, but the righteous will be protected.

We hear of even more rumors of wars, more famines, more earthquakes than did the early Christians--maybe because they actually are more, or maybe because of the worldwide media we just hear of more.

vs. 31:  Again the gospel will be preached in all the world.

It was rapidly preached in all the (known) world by the early Apostles.  Now it will be carried to all the world again.  We are approaching this point in history now.

vs. 32:  Again there will be an Abomination of Desolation.  Exactly what this will entail is unknown.

vs. 33-34:  Immediately after the tribulation of those days, the sun and moon will be darkened, and the stars will fall.  It will happen quickly:  all in one generation.

vs. 35:  This prophecy is guaranteed.

vs. 36-37:  Now Christ will come in his glory, with his angels and trumpets and gather the remainder of the righteous to him from all over the earth.  Those who have studied and followed Christ's word will not have been deceived and will be ready to greet him.  They may "lift up their heads," for their redemption is here (Luke 21:28).

It is prophecied that Christ will come back to the Mount of Olives (Zech. 14:4-5).

vs. 38-43:  When they see the signs, they will know he is coming; but not one soul will know exactly when.  If their minds are focused on day-to-day cares and not the gospel, they will be overcome, just like Noah's neighbors were.

Once again, the word parousia is used in specific referral to the Second Coming.

vs. 44-45:  The righteous will be picked out individually from among the wicked and saved.

It will do no good to be hanging around worthy people if you yourself are not worthy.

vs. 46-55:  The only way to guarantee your salvation at the end of the world is to be doing the Lord's will at all times.  There will be no warning, no chance for a "death-bed repentance," and we must not give up, no matter what, but continue to endure in righteous works to the end.  This will not take place during the time the New Testament was being written, but much later.

Enduring in righteousness is the key to coming out well at the end of the world.  Four hazards to enduring to the end are noted in vs. 7-10, and we must beware of them:
To counter these, we must

I am impressed. I will continue following your blog. Thoughtful way you weave historical records.

Excellent! I'll be coming back for more. :)

I appreciate your insights every week as I prepare to teach my lesson. Thanks for all the hard work you put into this.

I was so impressed with this lesson. I expanded the attention grabber a little, by adding the items: clothes, a picture of Winter, and a missionary tag.

This is one of the best lessons you have prepared...and thus I think it will go very well for me tomorrow in Gospel Doctrine.