After going to all the trouble of collecting, financing, organizing, analyzing, and shelving your food storage, would you be willing to share it with others?  In 1871, in the "extremely harsh" settlement of Spring Valley, Nevada, Mormon pioneer Joseph Millet wrote in his journal:

"One of my children came in, said that Brother Newton Hall’s folks were out of bread. Had none that day. I put…our flour in [a] sack to send up to Brother Hall’s. Just then Brother Hall came in.

“'Brother Millett, we have none.'

“'Well, Brother Hall, there is some in that sack. I have divided and was going to send it to you. Your children told mine that you were out.'

"Brother Hall began to cry. Said he had tried others. Could not get any. Went to the cedars and prayed to the Lord and the Lord told him to go to Joseph Millett.

“'Well, Brother Hall, you needn’t bring this back if the Lord sent you for it. You don’t owe me for it.' You can’t tell how good it made me feel to know that the Lord knew that there was such a person as Joseph Millett."  (Eugene England, "Without Purse or Scrip,", New Era, July 1975; also Boyd K. Packer, Ensign, May 1980; also Joseph B. Wirthlin, Ensign, December 2000; also Thomas S. Monson, Liahona, December 2006)

There are many who would be like Joseph Millet, and would share their supply of food or fuel with another in need.  But in the first parable of Jesus that we are going study today, the righteous who were prepared did not share their fuel with their fellow "saints" who were unprepared.  It's quite contrary to the teachings of Jesus to be stingy about anything we have that another doesn't, but in this case, it was impossible to share.

First off, we have to get one thing straight:  This is not the parable of the five virgins and the five harlots.  All ten were virgins or "members of the Church in good standing."  The number of the virgins also verifies that they were believers.  Every Hebrew number has a meaning very significant to the Jews, so anytime we see a number in the Bible, we must be highly suspicious that the number is going to enhance the lesson being taught.  In this case, it is the number ten, and ten symbolizes "testimony; law and responsibility" (Bible Numerics.com).  These women had testimonies of Christ, understood the law, and were responsible for keeping it.

They had all not only been invited to the wedding feast, but were expected to play a significant role in it.  They were to carry their lamps to light the way of the bridal procession.  The lamps were probably attached to a pole and carried aloft (McConkie, p. 466).

All of the virgins had oil in their lamps as the story began.  Although some had extra, all of them thought that what they had was enough.  But it took longer for the bridegroom to come than expected, and when he came, five of the lamps had run out of oil.  The five with extra oil refilled their own lamps, and the five in need desperately asked them to share.  But this was not possible.

"The shape of Jewish lamps, outside lips rounded inward, made it almost impossible for someone to pour oil from one lamp to another."  (Primary 7 Manual, "Lesson 25")  The oil is poured from the storage recepticle into the central opening.  The wick is inserted in the little hole on the side to absorb the oil.  (You can see the burn marks near the wick hole in the lamp below.) 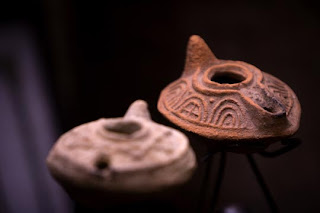 What is the oil?  The Doctrine and Covenants gives a clue to the answer:

"And at that day, when I shall come in my glory, shall the parable be fulfilled which I spake concerning the ten virgins.  For they that are wise and have received the truth, and have taken the Holy Spirit for their guide, and have not been deceived--verily I say unto you, they shall not be hewn down and cast into the fire, but shall abide the day."  (D&C 45:56-57)

The oil is not only the testimony of the Holy Ghost, but the learned ability to use it as a guide.  We often tell our youth, "If you don't have a testimony, lean on mine," but at some point, every person must have their own testimony, independent of others, and be able to follow the Light of the Spirit or they will find themselves among the five foolish virgins, left out in the dark.

"All that one person can do for the salvation of another is to preach, teach, expound, and exhort; all that one man can do for his fellows is to teach them the truth and guide their feet into paths of virtue and rectitude.  All that the five wise virgins can do for the foolish is to tell them how to gain oil for themselves" (McConkie, p. 468).

The Parable of the Ten Virgins is about our personal testimonies. 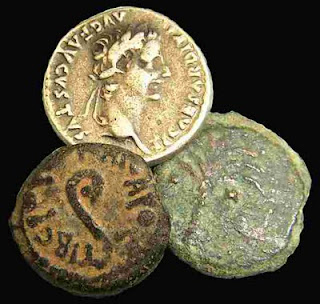 The very next parable is the parable of the talents.  Did you know there is a parallel parable to this one in the book of Luke?  We can learn a lot by comparing these two parables.

So what accounts for the differences, and what do they teach us?

First, it is important to note that the parable of the pounds was given to a mixed audience of believers and unbelievers or potential converts (Talmadge, p. 581).  The parable of the talents was given in Christ's last few days only to the Apostles, as a continuation of the Olivet Discourse (see Matt. 23:3).


Second, it is helpful to look at the writer and his audience.  Luke was a Gentile converted by the missionary Paul, writing his gospel to Gentiles.  Matthew was a Jew writing to Jews.  (For more on this, see "Overview of the Four Gospels" in a previous post.)


Keeping this in mind, let's look at some of the individual symbols:
An interesting side note:  Our current English usage of the word talent as a special gift or ability comes directly from this parable (Webster's Intermediate Dictionary).


So how do we invest our talents for an increase?  We have to 1) work beyond the minimum requirements, and we have to 2) take risks.


The parable of the talents and pounds are statements about our personal stewardships.

All three of these parables are about the Parousia, or the Second Coming (Harper-Collins Study Bible, p. 1904), and Matthew's is the only gospel that records them.  They were given in a temple-like setting to the strongest of the believers.  The final of the three is a a sequel to the previous two. 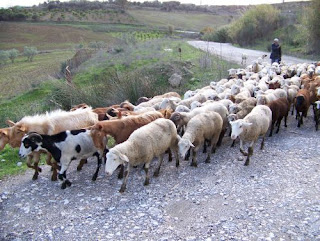 "Nearly all flocks in the Middle East have sheep and goats, as was the case in Jesus’ time. Both are used—the hair of the goats is useful for many practical purposes, and cheese and yogurt are made from the milk. But sheep and goats are very different and do not graze very well together. Shepherds usually prefer the sheep, since goats get into all sorts of trouble. They climb steep, hazardous slopes and often browse while standing on tree branches. Sheep are gentle, walk slowly, and usually obey. This is not so with wandering goats" (Homer Ellsworth, "Thoughts on the Good Shepherd," Ensign, Dec. 1985).


The interpretation of this parable immediately follows it.  Those on the right hand of Christ are those who have fed the hungry (paid fast offerings, taken casseroles, worked in soup kitchens), given drink to the hungry (showed the way to Living Water), taken in strangers (welcomed a new member, spoken kindly to a shockingly dressed teen), clothed the naked (helped "cover" or make acceptable those in a vulnerable state, sent clothes to the needy), visited the sick (that one doesn't need a cultural translation), or come to those in prison (literally ministered to convicts, or helped another free himself from the shackles of sin).  These are the works expected of Christ's flock.

What happens if you don't do these things?  You get everlasting fire with the devil.


Hmm.  You don't have to take away the food or drink, or kick the stranger, or beat the guy in prison to reap the agony of hell; you only have to neglect to help them.  Scary!

What happens if you do these things?  You get to hear this from the Savior:  "Come, ye blessed of my Father, inherit the kingdom prepared for you from the foundation of the world" (Matt. 25:34).

This life is a grand apprenticeship.  By our works, and by our testimony, and with the grace of Christ, we will be made fit as members of the Good Shepherd's flock.

I appreciated the thoughts about the impossibility of sharing oil. That made perfect sense.

Dear sister Jensen: my husband and I just finished reading and ponder on your message, thank you so much for taking the time to keep on helping us updating it to this year... has been of much help and specially enlightment to our understandinga to be better and also with more ideas on how to put it in practice in our daily lives and share it next Sunday on the classroom in our ward, since many of us do not know the language or have the privilege of know of your blog... hope I can keep sharing it with some , thanks again

thank you for your reflections on the parables -- terrific insight!

This really helped me explain the parable better to my Primary class. Understanding the background and the significance of the sheep and the goat will give the children a real visual of what the symbolism is. Thanks!!

Joseph Smith’s inspired revision of the scriptures places responsibility for being prepared right where it belongs: “Ye know me not” (Joseph Smith Translation, Matthew 25:11)