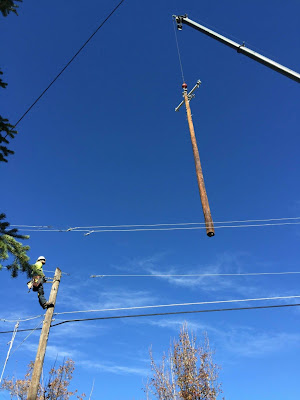 I hold the copyright to this photo, but you may use it
for teaching purposes.


One of my four handsome sons is an electrician lineman, pictured above. Besides installment and maintenance of power lines, he is frequently called out "on trouble" to solve problems in power distribution, such as when poles are knocked down by wind or snow. During a recent ferocious thunderstorm with heavy rains and high winds, he worked for three days with almost no rest or sleep to restore power to a large part of the city of Ogden, Utah.

Ironically, people receiving the power repairs are not always grateful. During this storm, he was called out on a Friday at noon. Working straight through the day and the night in the wind and rain, he was repairing the line to a single residence at 5:00 in the morning, when the police showed up. The woman who lived in the home had called the police to complain about the noise the linemen were making. Of course, the police issued no citation because without enduring this noise, the woman would not have heat, light or power restored to her home. Linemen get a little annoyed when complaints instead of gratitude come their way when they are out in a storm, but they keep on working.

I see gospel lessons in everything and this was no exception. Some people complain about the prophets and apostles, the spiritual "linemen," violating their personal "noise ordinance" by telling them things they don't want to hear. And yet these "lineman" (or in scriptural terms, "watchmen on the tower") are putting their own personal comfort aside and expending great amounts of time and effort to restore heat, light, and power into those peoples' lives.

King Benjamin called a general conference of the church, with every family pitching their tents toward the tower from which he would speak.  He counseled them to “hearken unto me, and open your ears that ye may hear, and your hearts that ye may understand, and your minds that the mysteries of God may be unfolded to your view.” (Mosiah 2:9)

King Benjamin reminded his people that, just like our General Authorities today, he was an ordinary man who did ordinary work and suffered ordinary infirmities just like them, but who was allowed by the Lord to be a spiritual as well as temporal ruler over the people.

(If you prefer instead to focus on King Benjamin's teachings on the Atonement in Mosiah 3, I can't do better than Elder Bednar's April 2012 Ensign article, which you can find here.)

For current pictures of the Apostles, go to this link.


FOUR GAMES ABOUT OUR SPIRITUAL LINEMEN

To prepare this game, post pictures of the First Presidency and the Quorum of the Twelve.  Hand out wordstrips with their young adult service and their previous careers on them. but no names, and have the students try to match them up with the correct apostle. ( If you don’t have pictures, just write their names on the board.)

2. Served in the U.S. Air Force. Professor at Stanford, Commissioner of Church Education.

3.  Served as a flighter pilot in the West German Air Force. Airline Pilot.

7.  Served as a pilot in the U.S. Air Force. President of Papermate, V.P. of Max Factor, head of Hughes Television, President of Chesebrough-Pond’s.

8.  Served a mission to England. Institute Teacher, President of BYU.

9.  Served a mission to Germany. Professor, President of BYU-Idaho.

11.  Served a mission to Argentina. Lawyer.

13.  Served a mission to the Eastern United States. President and COO of Huntsman Chemical Corporation.

14. Served a mission to Japan. Co-founder and President of ICON Fitness.

15. Served a mission to Sweden. Professor of Medicine at University of Utah.

Pick one memorable quote or story from each Apostles' most recent conference talk. Read the quote and ask the class who said it.

1. “If the foundation of ___ is not embedded in our hearts, the power to endure will crumble.  –President Eyring

4. “Worthiness and willingness—not experience, expertise or education—are the qualifications for _______________.”  --Elder Bednar

9. “The sacrament gives us an opportunity to come to ourselves and experience a mighty change of ____.” –Elder Hales

10. “____ is a mistake that keeps on just keeps on giving.  Obviously, we suffer a little when some misfortune befalls us, but ____ requires us to suffer all good fortune that befalls everyone we know!”  --Elder Holland

This is not really a game, but a challenge.

Enos reported that the people of Nephi had “exceedingly many prophets among us.  And the people were a stiffnecked people, hard [or slow] to understand.”  (Enos 1:22; you may also want to read verse 23.)

Are we like this?  If not, prove it!  Write down (if you haven’t already) the items of counsel from General Conference that you personally received (read the talks if you’ve forgotten or if you missed them), and make a plan to implement them in your life, and then check yourself every Sabbath before going to Sacrament Meeting and renewing your covenants.

Can I just say how much I LOVE your teaching style and lesson material. Definately helps me bring the scriputures to my class for our benefit, today!!!

Thanks so much for your hard work. I live in NC and use your materials to supplement my lesson several times per month. My teenagers really liked your conference trivia game and it helped to get their attention to start the lesson.