How many prophets do we have in our Sunday School class?

"And Moses said unto him, Enviest thou for my sake? would God that all the LORD's people were prophets, and that the LORD would put his spirit upon them!" (Num. 11:29)

Are we all prophets?  Then what is the definition of a prophet?

Write on the board "Prophet: teaches and testifies of Christ."

"The work of a Hebrew prophet was to act as God's messenger and make known God's will...The prophet is to teach men about God's character and dealings...In certain cases, prophets predicted future events...but as a rule a prophet was a 'forth-teller' rather than a 'foreteller.'"  (Bible Dictionary, p. 754)

When our little boys were rough-housing and tickling on the family room floor, because we knew our little boys, we could know with a certainty that in five minutes, if we didn't break it up, someone would be crying.  In the same way, because of his knowledge of God's character and dealings, the prophet can predict what the Lord will do, without necessarily seeing the future.  He knows the eternal rules, rewards and consequences.  The summary of the job of a prophet was to keep the people in the right way, build their faith, correct their errors, and forewarn of punishments.

"In a general sense a prophet is anyone who has a testimony of Jesus Christ through the Holy Ghost."  (ibid.) So we should all be prophets in our own sphere.  In Sunday School, as we teach and testify of Christ to each other, we are using the gift of prophecy.  In our homes we do this as well.  All our missionaries are prophets, under this definition.  President Nelson (in 2020), of course, is THE prophet, whose responsibility it is to teach and testify of Christ to the entire church and world, along with the other apostles.

In the Book of Mormon account we are studying this week, who are the prophets?

"And now, it came to pass on the morrow that king Limhi sent a proclamation among all his people that thereby they might gather themselves together to the temple to hear the words which he should speak unto them...

"Therefore, lift up your heads, and rejoice, and put your trust in God, in that God who was the God of Abraham, and Isaac, and Jacob; and also, that God who brought the children of Israel out of the land of Egypt, and caused that they should walk through the Red Sea on dry ground, and fed them with manna that they might not perish in the wilderness; and many more things did he do for them.

"And again, that same God has brought our fathers out of the land of Jerusalem, and has kept and preserved his people even until now; and behold, it is because of our iniquities and abominations that he has brought us into bondage..." "For behold, the Lord hath said: I will not succor my people in the day of their transgression; but I will hedge up their ways that they prosper not; and their doings shall be as a stumbling block before them.

"And again, he saith: If my people shall sow filthiness they shall reap the chaff thereof in the whirlwind; and the effect thereof is poison.

"And again he saith: If my people shall sow filthiness they shall reap the east wind, which bringeth immediate destruction.

"And now, behold, the promise of the Lord is fulfilled, and ye are smitten and afflicted.

"But if ye will turn to the Lord with full purpose of heart, and put your trust in him, and serve him with all diligence of mind, if ye do this, he will, according to his own will and pleasure, deliver you out of bondage." (Mosiah 7:17,19-20, 29-33)

Limhi was acting as a prophet to his own little group of people by teaching them about God, explaining God's dealings with the children of Israel and with themselves, and quoting prophecies from the scriptures.

The greatest prophet in this account was Abinadi, of whom Limhi said:

"And a prophet of the Lord have they slain; yea, a chosen man of God, who told them of their wickedness and abominations, and prophesied of many things which are to come, yea, even the coming of Christ.

"And because he said unto them that Christ was the God, the Father of all things, and said that he should take upon him the image of man, and it should be the image after which man was created in the beginning; or in other words, he said that man was created after the image of God, and that God should come down among the children of men, and take upon him flesh and blood, and go forth upon the face of the earth." (Mosiah 7:26-27)

How many revelators do we have in our Sunday School class?

"Therefore this is thy gift; apply unto it, and blessed art thou, for it shall deliver you out of the hands of your enemies, when, if it were not so, they would slay you and bring your soul to destruction." (D&C 8:2-4)

If we have received the Gift of the Holy Ghost, we should have the gift of revelation.  The Holy Ghost is such a great gift because it gives us a direct line of communication from God.  "Revelation is the natural inheritance of all the faithful."  (Bruce R. McConkie, Mormon Doctrine, "Revelation.")

So we all should receive revelation.  Does that make each of us a revelator?  It could.  "Anyone who receives revelation from the Lord and conveys the revealed truth to another is a revelator" (ibid.)

Write on the board, "Revelator: receives revelation--tells to others."

So, if the ward Young Men's president feels greatly inspired to take a certain action, and he shares that revelation with his presidency, he is a revelator.

This gift seems very closely related to that of a prophet.  If we have received a testimony and are sharing it (prophet), we are also sharing revealed truth (revelator), because a testimony is gained through revelation by the Holy Ghost.

Again, the revelator for the entire church is President Nelson, along with his counselors and the Quorum of the Twelve Apostles.

Who was an obvious revelator in this Book of Mormon account?

"And it came to pass that there was a man among them whose name was Abinadi; and he went forth among them, and began to prophesy, saying: Behold, thus saith the Lord, and thus hath he commanded me, saying, Go forth, and say unto this people, thus saith the Lord—Wo be unto this people, for I have seen their abominations, and their wickedness, and their whoredoms; and except they repent I will visit them in mine anger." (Mosiah 11:20)

He also itemized details about the Lord's plans for his people.

"And except they repent in sackcloth and ashes, and cry mightily to the Lord their God, I will not hear their prayers, neither will I deliver them out of their afflictions; and thus saith the Lord, and thus hath he commanded me." (Mosiah 11:25)

Abinadi stated outright that he was a prophet and a revelator with his words, "Thus saith the Lord and thus hath he commanded me."

How many seers are in our Sunday School class?  Unless we're in downtown Salt Lake City, probably none.

"...they have brought twenty-four plates which are filled with engravings, and they are of pure gold...

"Now Ammon said unto him: I can assuredly tell thee, O king, of a man that can translate the records; for he has wherewith that he can look, and translate all records that are of ancient date; and it is a gift from God. And the things are called interpreters, and no man can look in them except he be commanded, lest he should look for that he ought not and he should perish. And whosoever is commanded to look in them, the same is called seer.

"And behold, the king of the people who are in the land of Zarahemla is the man that is commanded to do these things, and who has this high gift from God." (Mosiah 8:9,12-14)

A seer has the authority to translate, using the Urim and Thummim.  Who was this king?  Mosiah II.

"And the king [Limhi] said that a seer is greater than a prophet.

"And Ammon said that a seer is a revelator and a prophet also; and a gift which is greater can no man have, except he should possess the power of God, which no man can; yet a man may have great power given him from God.

"Thus God has provided a means that man, through faith, might work mighty miracles; therefore he becometh a great benefit to his fellow beings." (Mosiah 8:15-18)

Post on the board, "Seer: has authority to translate--can see the past and future."

The Bible Dictionary says there have been more prophets than there have been seers.  That is well-illustrated in this Book of Mormon story.  Limhi was a prophet for his people, but had no power to translate these plates, although he had a great (and righteous) desire to know what was on them. 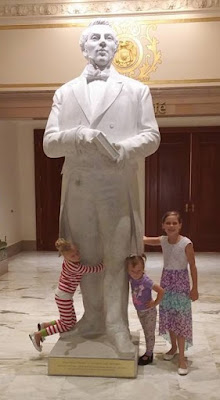 My cute grand-nieces giving Joseph Smith leg hugs.
Photo courtesy of Amanda Hymas, who holds the copyright.
May be used for teaching purposes.

In the latter days, Joseph Smith was the greatest seer.  He had the authority of the gift of translation, and he practiced and exercised it so well, that he eventually could translate without a Urim and Thummim.  He also saw many visions of the past and future.
Mormon was one of the great seers of the Book of Mormon.  In Mormon 8:35, he said, "Jesus Christ hath shown you unto me, and I know your doing."

In our day, we sustain Russell M. Nelson, his counselors, and the Twelve Apostles as "prophets, seers, and revelators."  Someday our prophet will definitely use all of these gifts when we get the additional scriptures promised from the ten tribes (2 Ne. 29:13), and from the sealed portion of the Book of Mormon.

It is truly a wonderful thing that we have prophets, seers and revelators on the earth today.  It is also wonderful that we each have the Gift of the Holy Ghost and are therefore able to learn to receive revelation and inspiration, great and small.  And it is a very great thing that we all have the right to the gift of prophecy, or the testimony of Jesus Christ.  As President Gordon B. Hinckley said, in his closing remarks at the April 2000 General Conference, "Of all the things for which I feel grateful, one stands out preeminently.  That is a living testimony of Jesus Christ."
Posted by Nancy Wyatt Jensen at 7:42 AM

I just found your site, my daughter in MS told me about it, she's a gospel doctrine teacher there, and I have the youth, but we teach out of the adult manual.

You're a lifesaver! I was so stumped on this lesson, as how to present it, you've really helped me today, to feel confident in preparing a lesson that will keep teenagers interested. Thank you!