Doctrine and Covenants Lesson #37 "We Thank Thee, O God, For a Prophet"

Sing "Come, Listen to a Prophet's Voice" as a class.  Note that Joseph Daynes wrote the music, the first Tabernacle organist, whom we learned about in Lesson #36.  Or, if you have an able violinist and vocalist ask them to perform "Come, Come Ye Saints," (violinist accompanying) as this was sung at the Conference of December 1847.

In November of 1847 with the settlement of Salt Lake City begun, the apostles gathered at Winter Quarters to decide whether the Church needed a First Presidency.  They asked a question that may be asked today: why is a First Presidency necessary when the Quorum of the Twelve Apostles holds all the keys?  But as they considered and debated over the days, they all felt that the focused leadership of a presidency was God's will for the Church.  Brigham Young, already the President of the Quorum of the Twelve Apostles, emerged as the obvious choice.  "None questioned his industry, integrity, or shrewd political savvy.  His status grew the further west they [had] traveled.  As Orson Pratt put it [in their final meeting, December 5]: 'There is no man in this Quorum who I respect more than Brother Young, and no man that I would wish sooner to be at the head...He has a great anxiety on his mind and although I consider I have seen errors in him, I feel that I could lay down my life for him'" (Richard E. Bennett, We'll Find the Place: The Mormon Exodus, 1846-1858, p. 289).  The other apostles were in agreement. Heber C. Kimball motioned and Wilford Woodruff seconded that Brigham Young be sustained as President of the Church.  All others voted yes.  President Young chose those two men as his counselors.

It was agreed that a special conference of the Church be convened, rather than waiting for April Conference, as many of the Apostles were about to leave on missions.  It was decided that Christmas would be the best time, as many people would be gathering to Winter Quarters from the outlying areas to be with family.  One problem presented itself:  Where to hold this conference?  It would be too cold outside, and the size of the crowd exceeded the size of any building.  It was decided that they build a tabernacle.  200 men immediately agreed to help.  On the evening of December 23rd, the log tabernacle was completed!  "It was, for its time, a wonderfully large cottonwood log tabernacle 65 feet long by 40 feet wide, complete with newly hewn benches, stoves for heating on all sides, a large fireplace, several doors, glass windows, and a smooth floor--[As Wilford Woodruff said,] 'an ornament to this new country'" (Bennett, p. 290-291).

The special conference was held December 24-27.  The new Tabernacle was a wonderful meetingplace, housing 1,000 attendees, some on buffalo robes on the floor.  A band and choir participated.  On the final day, which was Sunday, Brigham Young's name was presented for a vote.  After a soloist sang "Come, Come Ye Saints," accompanied by a violin, Orson Pratt rose to speak.  Among other things he said, "The time has come when the twelve must have their hands liberated to go to the ends of the earth."  All present voted in favor of Brigham Young and his presidency; there was not a single dissenter.  The meeting concluded with the hymn "The Spirit of God," and all present giving the hosanna shout (Bennett, p. 292). 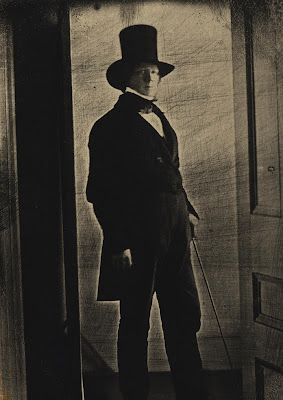 Brigham Young at age 45, circa 1846
From LDS.org Church History
(I had never seen this photo before!
Isn't it great?)

The following October Conference in Salt Lake City,  Brigham Young having just arrived back there a couple of weeks before, his name was presented to the saints there, and the voting was again unanimous (Bennett, p. 354).

Why was there such a delay between prophets? Perhaps so that the choice could be made so clear by the efforts of Elder Young as the leader of the pioneers. Brother Bennett writes, "One very real heritage or result of the exodus was that it made a prophet of Brigham Young in a way perhaps no other circumstance could have...By the time they settled at the Great Salt Lake, for the vast majority there was no longer any doubt who should lead the Church" (Bennett, p. 361).

After Brigham Young's death there was a three-year wait until John Taylor's succession to the Presidency.  But during the Jubilee Year (50th Anniversary) of the Church, the event finally occurred.  Here are a few fun things about the progress that had been made in Salt Lake City in the 33 years since the Saints had entered the valley: 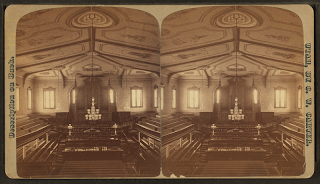 This photo for an antique stereograph viewer shows
the interior of the Assembly Hall
in the second half of the 1900th century.
From Wikipedia.

"April in Salt Lake City can be cold, raw, sleety, and snowy; April of 1880 was all of that. The three thousand Saints who crowded from all parts of the territory into the newly completed Assembly Hall for preliminary meetings on April 4 and 5 were impressed with the magnificent ceiling with its frescoes showing the Nauvoo and Kirtland temples and other scenes from Church history. A beautiful pipe organ, second in size only to the great organ in the Tabernacle to the north of the Assembly Hall, accompanied the choir under George Careless’s direction. More important, however, in view of the weather, were provisions for creature comfort; the new building was designed with steam heat that was piped under alternate benches throughout the hall and through twelve radiators against the walls. It was brilliantly lighted, despite the cloudy day, by 24 gas lamps and a huge central chandelier of 12 gas jets."  President John Taylor was sustained as "trustee-in-trust" of the Church at this conference.

I found this "then and now" photo set of the
Assembly Hall ceiling at a lovely blog:
Utah's Present History

"Salt Lake City, the City of the Saints, had grown much in the 33 years since the Mormon pioneers had first entered the valley. A bird’s-eye view from Ensign Peak, to the north of the city, would have shown a panorama of neatly laid out ten-acre blocks, with wide, tree-bordered streets, most of which were still choked with dust in the summer and mired in mud during the winter, although some of the downtown merchants were laying 'asphalteum' in front of their stores for the benefit of pedestrians. And, for those who did not care to walk these streets, a street railway with horse-drawn cars running every half hour extended to eight different parts of the city. Gas lights illuminated the main streets, most downtown businesses, and many homes. 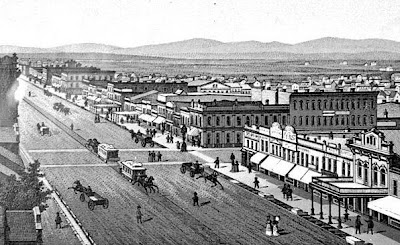 
"As it is today, the intersection of Main and South Temple streets was the heart of the city. Immediately to the northwest was the temple block, site of the April conference, surrounded by adobe-plastered walls 15 feet high and 5 feet thick. Within the enclosure stood the great Tabernacle, seating 10,000, that had dominated the Salt Lake City horizon with its elliptical, turtle-backed roof for the past decade. The magnificent new Assembly Hall, used for the first time for the preliminary meetings which conference visitors that jubilee year had attended, lifted its spires south of the Tabernacle. The grey granite walls of the unfinished Temple rose 65 feet above the ground, dwarfing all else but the bulk of the Tabernacle...

"Loose livestock wandering the city streets was a chronic nuisance; in the midst of April conference that year, a cow was found prostrate on North Temple Street in the 18th Ward area. After two days, the Deseret News editor reported that 'the cow … has gone the way of all cows, at last, but did not go quite far enough to please the good people of that immediate neighborhood. The present state of weather will soon render the carrion a disagreeable source of annoyance and complaint.' (Deseret News, April 10.)"

"The Deseret News also announced regular church services. The first Thursday of each month was fast day; the public works were closed for the day so that men could attend fast meeting Thursday morning. The regular Sunday schedule included Sunday School at 10:00 A.M. in the various ward buildings, a general sacrament meeting in the Tabernacle at 2:00 P.M., which was regularly addressed by the General Authorities, and evening meetings at 6:00 P.M. in the wards...

" It seemed a fitting climax to the Saints’ year of jubilee that at October conference, in solemn assembly in the Tabernacle, John Taylor was sustained as prophet, seer, and revelator, the third President of the Church, with each of the quorums of the priesthood standing separately in turn and voting. The three-year interregnum without a President had been long, yet the Church had progressed under the united direction of the Twelve. As historian Hubert Howe Bancroft put it, 'The world was now to learn that the inherent vitality of Mormonism depended not on the existence of any one man or body of men, not even on the existence of the Twelve' (H. H. Bancroft, The History of Utah, San Francisco: History Company, 1889, p. 677)."
(Margaret F. Maxwell, "Year of Jubilee," The New Era, July 1980)

You may want to read the Parable of the Watchman on the Tower, D&C 101:43-54.  Then discuss what counsel was heard from our present-day Watchman in our most recent General Conference (list on the board) and discuss ideas for carrying out the Prophet's counsel. 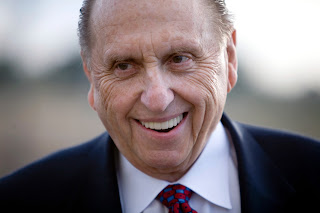 I love this photo of President Monson
from Wikipedia's article on the Church.
(I'll tell you:  Someone put some serious effort
into that Wikipedia article!  It's a small book!)

As is often the case, our prophet President Monson closed the April 2013 General Conference with a blessing: "I invoke the blessings of heaven upon each of you.  May your homes be filled with peace, harmony, courtesy, and love.  May they be filled with the Spirit of the Lord.  May you nurture and nourish your testimonies of the gospel, that they will be a protection to you against the buffetings of Satan.

"Until we meet again in six months, I pray that the Lord will bless and keep you, my brothers and sisters.  May His promised peace be with you now and always.  Thank you for your prayers in my behalf and in behalf of all of the General Authorities.  We are deeply grateful for you.  In the name of our Savior and Redeemer, whom we serve, even Jesus Christ, the Lord, amen" (Thomas S. Monson, "Until We Meet Again,"  Ensign, May 2013, p. 114).

You may want to conclude with a hymn as well, "The Spirit of God" or "We Thank Thee, O God, For a Prophet."
Posted by Nancy Wyatt Jensen at 8:46 AM