It's time once again to play the...

This pyramid game won't earn anyone $10,000 but it has more important categories!  To prepare the game, make 10 numbered squares out of paper.  On the back of each square list the category.  The teacher reads the items in the category, and the class members guess the category.  (The entire class is on the same team.)  The teacher can give clues to the page number or verse number in the scriptures if needed.  When the class guesses the category of Box #1 (or comes close), the teacher turns the box or square over to reveal its category.  Commentary and discussion of the topic can take place, then the class moves on to guessing Box #2, and so on until they reach Box #9.  They then must look at all the categories and decide what the category of the entire "Celestial Pyramid" is, upon which Box #10 will be turned over and the class has won the game. 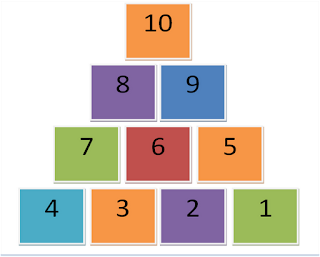 THE POWER OF A RIGHTEOUS MINORITY

It is interesting to note the powerful works wrought by minorities in this story.

Posted by Nancy Wyatt Jensen at 11:58 AM

this is awesome! i teach 16/17 year old youth and it is so nice to have something like this lesson every now and then to change it up and keep the interested. mahalo!!

Thanks...I always have a look at your lesson, as I love the consise way you present your ideas. I take what I need and always am grateful. Thanks!

Thanks for posting this. I teach the 14/15 year old class. I have a couple rowdy boys in there. I am hoping this idea might keep them interested.

Thank you SO much for this......
On a personal level, your very last sentence struck home to me - THANK YOU.

Thank you for putting the pyramid together...my gospel doctrine lesson went through 3 transformations and I couldn't get it all in...my adult class enjoyed the pyramid and we covered everything I wanted to Thanks again in Salt Lake