April 5-11: Doctrine and Covenants 30-36 Missions to the Lamanites 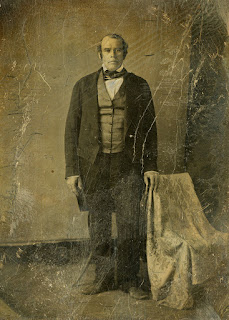 As soon as the first four missionaries were called to a faraway place  (Oliver Cowdery, Peter Whitmer, Jr., Parley P. Pratt, and Ziba Peterson to the Lamanite wilderness of North America, D&C 28-32) the women of the church began preparing these missionaries temporally for their service (just as they do today, right, mothers?).

"The women cut trousers, shirts, and jackets from rough homespun wool, linen, and cotton fabrics, and then sewed clothing for the missionaries.  Every pin, needle, and button was used with care, and no thread was wasted.  The wool for stockings and sweaters had to be carded, spun on a spinning wheel, and then knit by hand.  To make the stockings wear longer, the women added their own long hair to the yarn as they made the heels of the stockings."  (Brian and Petrea Kelly, Latter-day History, p. 67)

Here was the first "Mission Statement," written as a covenant between these missionaries and the Lord, which they signed before they left.  Imagine if your son or daughter (or yourself) wrote such a promise and signed it before leaving.

"I, Oliver, being commanded by the Lord God, to go forth unto the Lamanites, to proclaim glad tidings of great joy unto them, by presenting unto them the fullness of the Gospel, of the only begotten Son of God; and also, to rear up a pillar as a witness where the temple of God shall be built, in the glorious new Jerusalem; and having certain brothers with me, WHO ARE CALLED OF GOD TO ASSIST ME, whose names are Parley, and Peter and Ziba, do therefore most solemnly covenant with God that I will walk humbly before him, and do this business, and this glorious work according as He shall direct me by the Holy Ghost; ever praying for mine and their prosperity, and deliverance from bonds, and from imprisonment, and whatsoever may befall us, with all patience and faith.  Amen.  [signed] Oliver Cowdery."  (LDH, p. 68)

During part of the journey, the Ohio River was frozen over and they could not travel by boat.

"We travelled on foot for 300 miles through vast prairies and through trackless wilds of snow--no beaten road; houses few and far between; and the bleak northwest wind always blowing in our faces with a keenness which would almost take the skin off the face.  We travelled for whole days, from morning till night, without a house or fire, wading in snow to the knees at every step, and the cold so intense that the snow did not melt on the south side of the houses, even in the mid-day sun, for nearly six weeks.  We carried on our backs our changes of clothing, several books, and corn bread and raw pork.  We often ate our frozen bread and pork by the way, when the bread would be so frozen that we could not bite or penetrate any part of it but the outside crust."  (LDH, p. 73)

Thank you so much for the tidbits for this lesson. I can't tell you how much I enjoy your take on these lessons. It helps me immensely.

Me as well. This website has helped me personally as well as effective teaching. I love this site!