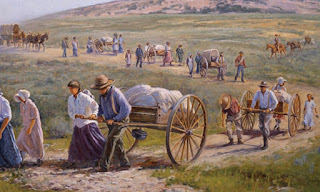 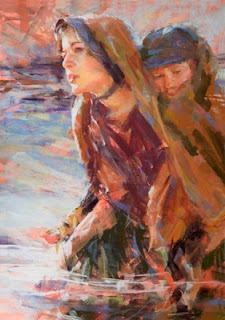 There is another fascinating aspect of the handcart pioneer story that is less well-known: that of the intrepid Daniel Webster Jones (not the Welsh missionary Dan Jones) and his group of 20 men who came as part of the rescue team, and then volunteered to stay the winter at a tiny fort on the trail near Martin’s Cove in order to guard the belongings of these poor Saints, since all wagon space was used to carry people back to Salt Lake City and anything left along the trail would be considered abandoned and free for the taking.  Theirs is a story of tremendous loyalty, kindness, obedience and bravery, as they suffered on guard duty all through the long winter.  They were organized into a small branch of the Church before they were left behind, and they carried on with church meetings and fast days, although they had a lot of extra fast days as well.  They nearly starved to death on several occasions, and even learned to boil cowhide to create a gelatin that they could subsist upon until the next miracle arrived.  Fortunately, Dan Jones' personal recollections are available online (Forty Years Among the Indians). This particular adventure begins in Chapter XIII.  Wallace Stegner, a non-Mormon historian who specialized in Mormon history, chronicled the story in an interesting narrative, and that is also available at that site as "The Man That Ate His Pack Saddle."
Posted by Nancy Wyatt Jensen at 2:52 PM